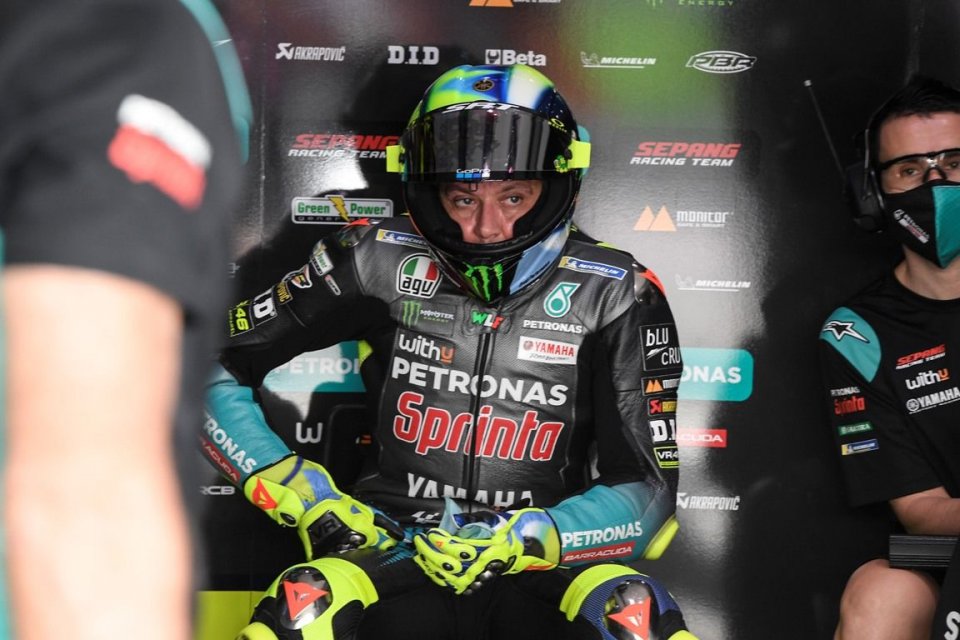 Friday at Losail was certainly not what Valentino Rossi expected it to be. The Italian is currently outside the cut-off point for Q2 in view of Saturday's qualifying. Two complicated free sessions for the #46, who continued to suffer from various rear grip problems as he himself admitted.

The turning-point that the Doctor was looking for did not arrive, unlike Franco Morbidelli, who managed to secure a place in the top ten, despite the smoke coming out of his bike during FP1. In this regard, the nine-time world champion couldn’t avoid a comment.

“I already have too many problems without thinking about Morbidelli - joked the #46 - I honestly don't know what happened to Franco, since I didn't speak to him. I only saw the smoke coming out of his M1, but I don't think it was a big problem, since his team didn't seem too worried. Apart from that, I don't even know what happened to him last Sunday, since I didn't understand it. "

In fact, Valentino focused on his own problems at the end of a Friday that sees him 14th almost a second from the top.

“It was a difficult day for me - he admitted - we tried to work on tyre wear, finding something better, since my pace is more consistent. The fact is that I continue to suffer, especially in the rear, in the flying lap. In fact, I was unable to replicate the 1’53.8 of last week and I am currently out of Q2. Tomorrow we will have to look for a solution at the rear to be faster, because being out of Q2 is a problem ”.

Valentino then went into further detail about his performance…

“I did a good first sector, managing to be fast in the following sector as well. The problem is the third sector, because in the left corner I suffer from poor rear grip. Tomorrow it will be difficult to be able to improve in FP3 and enter Q2 directly. As already said I'll focus on the pace, at the moment it's consistent, but not fast enough ”.

Rossi was also unable to hide a bit of concern about the race weekend.

“Yes, I'm worried, because my pace isn't great. I will therefore have to work on the bike, trying to improve my pace and understand how to take a step forward. Looking at the ranking, however, I am far from the top ten and from the first two positions which are useful for guaranteeing access to Q2".

The disappointment in Valentino's face is visible, also because seven days ago things were a lot different...

“Last week, in FP2, I was faster, even if after a few laps I had to slow down. Today, however, I did a long run with fewer problems, but I was slower. We will therefore see what to do and how to behave ”.

Finally Valentino spoke about Morbidelli again and his inclusion in the Academy.

"Franco's father moved from Rome to Babbucce, because there were several tracks for boys. At the time his father spoke to my father Graziano, and Franco started training with me at the Cava since 2009, I remember that there was still SIC. Then in 2013 he joined the Academy when he started the project. We focused on Franco because he was a good guy, young, strong and after what happened with SIC we wanted to help him. He was racing in Supersport, but we still bet on him. I considered him too strong for Superbike ”.