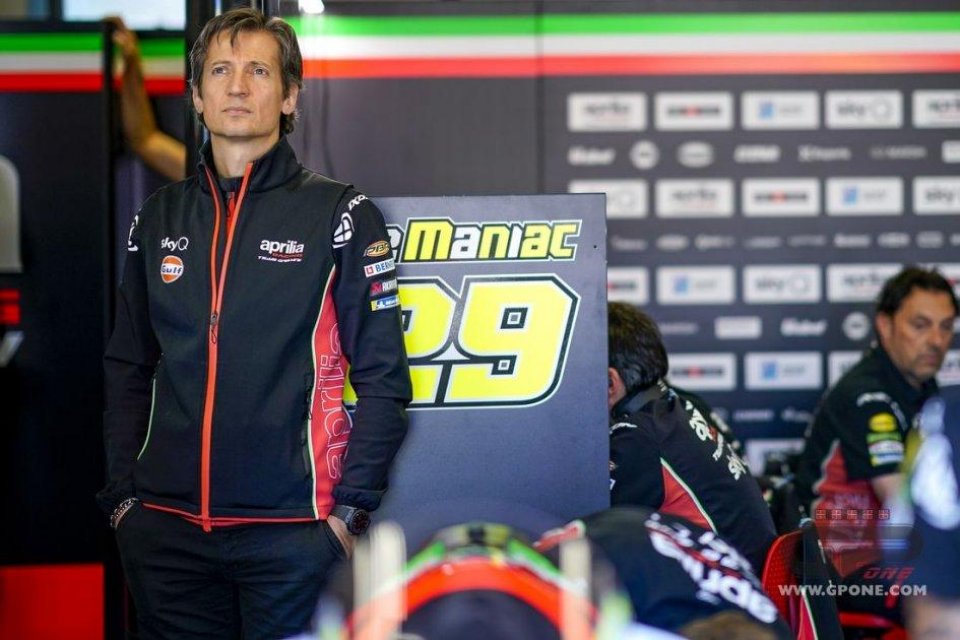 A good start to the season with Aleix Espargarò in Qatar, a test with Dovizioso in Jerez in just over a week, the decision on the satellite team for next year: the agenda of Massimo Rivola, CEO of Aprilia Racing, could not be more full of commitments. The Noale manufacturer is trying to take the last step forward in MotoGP, after having made a few too many wrong ones in the past and the next few months will be decisive, both on and off the track.

Massimo, let's start from the track. Were you surprised to see Aleix seventh ahead of his brother Pol’s Honda?

“I'm not surprised, it was a good start. Our goal was to stay in the top ten with a gap of less than 10 seconds from the first and we achieved it. When you see Aleix in such good shape during the tests, the risk is that the expectations are too high, but we knew that he is a rider who always gives 100% while there are those who don't, so they could improve more. We progressed a lot, his times prove it, and the bike was consistent throughout the race. Apart from the first few laps where he struggled with a full tank, we still have to work on the balance, he was fast ”.

How do you judge Savadori's race instead?

“It was practically his first test, because before he couldn't do more than two laps in a row due to shoulder problems. We have to wait, his championship will start in Portimao ”.

Rivola: "The goal is to be less than 10 seconds behind the best, if we succeed something good will happen"

Did the fact that the other manufacturers have the development freeze help you?

"Maybe. We have been able to work on the engine, we have not looked for more horsepower, at least for the moment, and I hope that this freedom of development can give us an advantage during the season because we have some things to try. Changing cylinders and heads has led to an improvement, the bike is now easier to ride. There are lots of bikes with good aerodynamics, we have already made changes in this area. The positive aspect is that last year's bike was already a step forward, we weren't able to get great results but we managed to close the gap from the best. If we manage to stay within 10 seconds, sooner or later, in the course of the season, something good will happen for us. Then we will have to take another step forward, I don't think we could be able to do the results of KTM last season, but we are going in a good direction ”.

Rivola: "Crutchlow complimented me on the bike. I wanted to rough him up!"

Savadori is a talented rider but he has no experience in the world championship, what went wrong with Crutchlow?

“The story is simple. Cal had asked us to race for us, we had told him that we would like him but that first we would like to know what would happen with Iannone. After several months, one Sunday he told us he had signed with Yamaha and the next day came the disqualification for Andrea, it was  terrible timing. I think, in the end, he has chosen the best thing for his life, he will be able to spend more time with his family. A few days ago I saw him in the paddock and he told me that our bike has made a big step forward, I wanted to rough him up a bit (laughs). It would have been nice to see him on our bike, but that's life ”.

Now there is another opportunity with Dovizioso…

“It will be a very interesting test for us, we are very curious to find out what his feelings will be on our bike. I think he will test the Aprilia rather than us test him (laughs). At the moment it is just a test, it would be a good story if it continued ”.

Rivola: "I'd be lying if I said that just one test with Dovizioso is enough for me"

And what if there were this possibility, maybe already this year?

“I would be lying if I said that one test is enough for me. I don't think there is this possibility at the moment, for him it will be great training, a test without any stress. If things go well, maybe we'll start putting some pressure on him (laughs). Now let's just think about making the best of this opportunity ”.

Dovizioso's manager Battistella said a wild card would only be possible under the conditions of having a project for 2022.

“Again, I'd be lying to say Dovi doesn't interest me. To be honest, I think it's too optimistic to think of a wild card this year because if a rider like him wanted to do it, and we would be happy, he wouldn't come back to race after the other riders have raced all year. I'm not thinking about it, certainly Dovizioso is a good goal for our future, and for many aspects: his talent, his experience, his approach. He came to Noale to take a look at the company and I saw in him a professional and attentive to the smallest details. Riders like that help you to grow, even Aleix ”.

There are rumours of a second test with Dovizioso at Mugello…

“We have planned a test at Mugello with our riders, maybe they took shape from this. If he asks us after Jerez, we would be delighted, he could try the bike on two very different tracks but, I'm not lying, we're only thinking about Jerez. On the contrary, I'm a little scared every time he gets on the dirt bike (laughs) ".

Rivola: "Even if we only had a 1% chance with Dovizioso, we have to try"

The problem is that Aprilia currently doesn't have a test rider.

“Smith would be the best solution for us, he knows the bike and its evolutions well. Now we have this chance with Dovizioso and, even if we only have a 1% chance of succeeding, we have to try. If it doesn't go through, we'll figure out if Bradley is still available. I think no one can blame us for trying to get Dovizioso ”.

Changing the subject, where is the project for the satellite team?

“It would be nice to have one and also to continue working with the Gresini guys for many reasons. One of my biggest regrets is not having been fast enough to show Fausto our strength over the years, I'm sure he would have liked this championship ”.

Rivola: " My first choice for a satellite team is to continue with Gresini Racing"

Are you still talking to Gresini Racing?

“Honestly, the time to decide is running out but I don't want to put too much pressure on Fausto's family after what happened. It is a very difficult situation, above all I want to respect the family and try to find a balance. I hope we can continue together, even if I know they are talking to Suzuki and Ducati. We know each other well, I was born in Faenza, maybe I'm not cold but when you work with certain people you appreciate them ".

Have you also talked to VR46?

“Not lately. For sure having the name of Valentino next to that of Aprilia would be nice, but this is just bar talk. My first choice is to continue with Gresini. We lived in a hybrid situation, we discussed it with Fausto at times because it was as if everyone lived in someone else's house, but we could have great potential together ”.