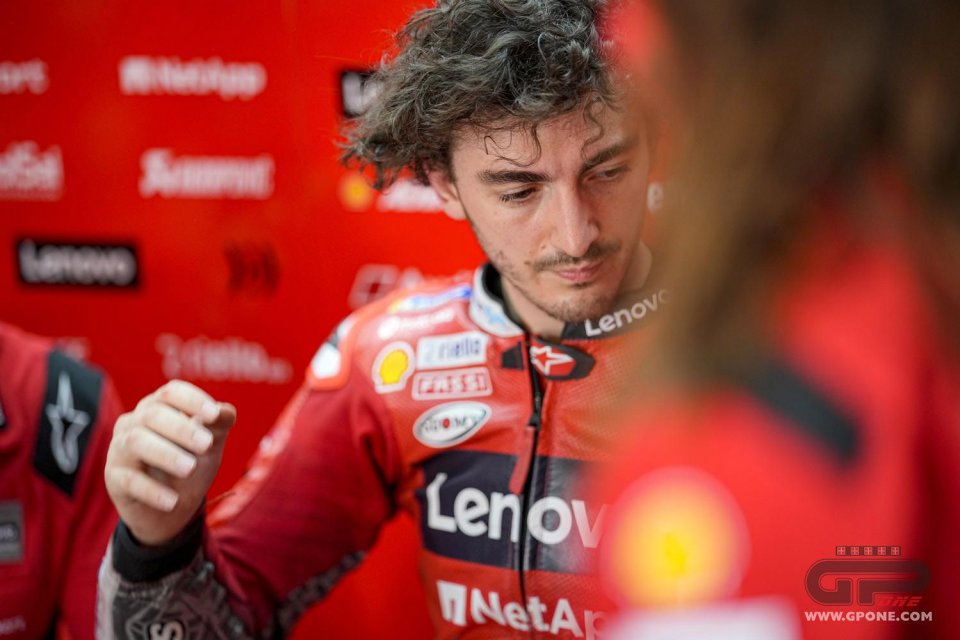 The second race weekend in Losail got off to a great start for Pecco Bagnaia. The Ducati rider finished the day in second place behind Jack Miller, who put in a monstrous performance today. But it is not so much the performance on the flying lap that gave Bagnaia and his team a smile, but rather the progress made in terms of tyre management and wear.

This was in fact Ducati's real weakness last week and it seems that Bagnaia may have found a way to solve the problem without losing his speed potential. The third place on Sunday is not a result to be thrown away, but Bagnaia wants to climb the other two steps and give the first win of the season to the Borgo Panigale manufacturer. As seen today, the potential to do so is all there.

"I think my sensations are better than last week - said a smiling Bagnaia - although the track conditions weren't better, I immediately found myself perfectly on the soft tyres and I feel I can manage them better even in the race. I set a really good pace, now we just have to wait to see tomorrow what conditions we can find. I can only say that I am perfectly at ease with the bike. When it came to doing the time attack, it went well immediately. Last week I had to do two to get into Q2, but this time I only needed one. I'm happy, everything worked, even new things we tried on the bike. In the end, however, I chose to use a bike that was the same as last week. I just need to improve on tyre wear, but I think we did a great job on that today. "

It seems that one of Ducati's big problems is the strong wind on the track and this weekend the wind is less intense. Will it be an advantage?

"The wind has always been a problem for Ducati, but last week there was a lot of it and we finished second and third, so I think if we can adapt well, we won't have any problems. With a little wind, you’re also better in the saddle, because today with all the humidity it was difficult. I'm finishing sweating now after the session! I think Suzuki and Yamaha are the rivals and the problem and not the wind ".

What kind of work did you do on the bike today?

"I tried a different setup, which worked well but made the bike a bit more unstable. So I decided to go back to a setup that I would call standard, and just tried to set the times in a different way. On my second exit I had used tyres and the same amount of fuel we have in the race, and I immediately set good times. I'm happy because it seems to me that everything is easy on the bike, I noticed it during the time attack. The thing that really means a lot to me is that already on my second lap I was very close to the times needed to stay in the top ten and it is not such a trivial thing. In my opinion this is great ".

"All the riders noticed that today the rear grip was lower than last week. There was more humidity, at first I thought I hadn't found a good tyre. I just found a way around the problem. I've never had a problem with the tyres overheating, which is another great thing. I am consistent even after many laps, without having to invent big things in the saddle. I just changed my style a little to safeguard the tyre on the back a bit more and it works. In my opinion today, given the conditions we were in, we went very fast.”