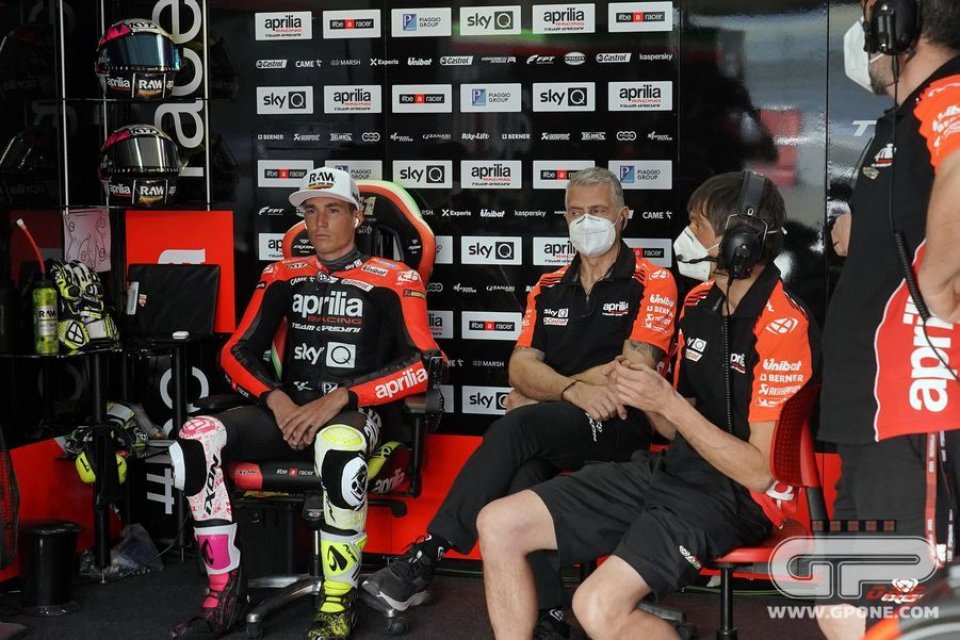 It’ll be a weekend full of expectations for Aleix Espargaró. The Aprilia rider has never hidden his enthusiasm for the Losail circuit and has admitted that another Grand Prix, on the same track, gives him a lot of hope. His 7th place on Sunday didn’t stop him from confirming that the current Aprilia is the best one ever. #41’s next goal is to prove that he can fight for the podium.

“During the tests, they told me that I shouldn’t worry because they were basically just tests,” Alex admitted. “Now I’m very happy to be able to confirm that this is indeed the best Aprilia ever in the MotoGP. I can battle it out in the leading group. In the last six laps of the race, the front tire didn’t let me fight for the podium. I already have plans for tomorrow’s FP1 and FP2.”

Front tire wear appears to be the 2021 RS-GP’s Achilles heel on the Losail circuit.
“I learned that other riders who finished ahead of me in the race also had a lot of wear on the front. I’ll also have to check the rear tire in the race, but I’m much more worried about the front. You have to push and insist a lot to get the bike to bend, and I think this is the biggest limit I have  in the race.”

And about the latest rumors of his possible arrival in the world of professional cycling.
“I love cycling, and one of my dreams one day is to be able to practice it. This is also the reason why I train every time I can. We’ll see in the future.”

Even in the race, Fausto Gresini’s memory always remains clear in Aleix’s mind. His goal of reaching the podium now is even more important.
“My first goal this year is to win a podium and dedicate it to Fausto. During the presentation of the team, here in Qatar, the atmosphere was very sad. When I’m in the race, I’m concentrated, but of course there’s always his memory in my mind. When I saw Di Giannantonio’s podium, besides  the tribute to Fausto, I felt the emotion of the rest of the team.”

As for Sunday’s results.
“I finished 7th,  but what matters most are the points. I’ve been fighting with the best, even if I have to say that, in the last four lap,s I struggled to overtake Miller, and I lost a lot of time. On lap 18, I was two seconds behind the first, so that means that I was practically fighting for the podium. I’m very happy. I suffered a lot. In many races, I came within forty seconds from the podium, and this gap makes me understand that Aprilia is growing and that we could have some good races this year.”