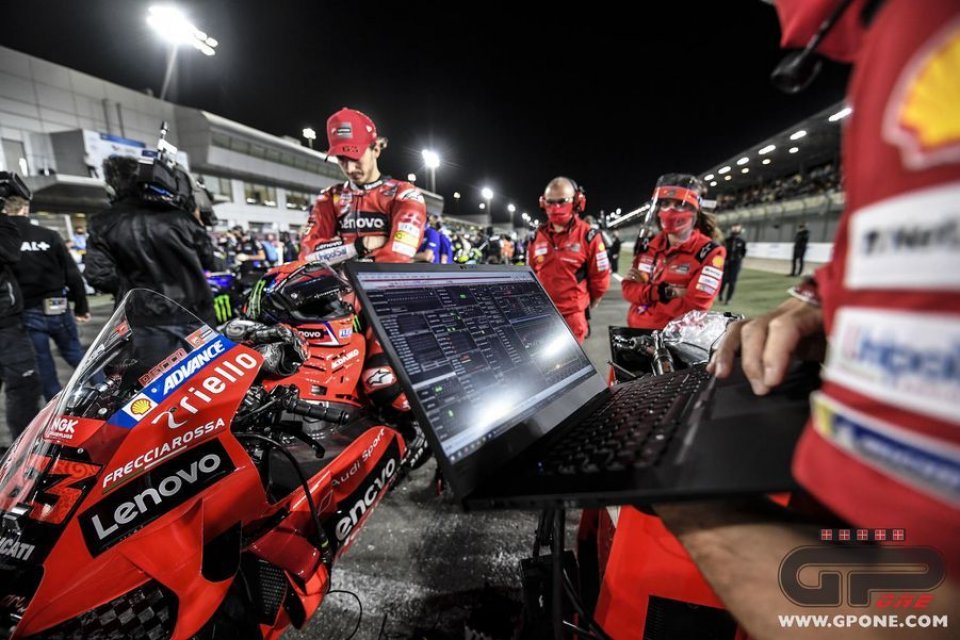 In Qatar, Yamaha was the winner, demonstrating that, even on tracks with a very long straight, brute strength is not enough to beat agility.  The M1, in fact, has always been far from the top positions in the weekend’s top speeds with Ducati in the lead, even breaking the record for the fastest bike in the premier class with Johann Zarco’s 362.4 km/h. As mentioned, however, you don’t win by engine alone, even if the speed comparison is certainly very topical, given the balance that seems to reign in recent times in the MotoGP. The table below shows the maximum speeds reached by the best nine riders at the checkered flag during the weekend.

The analysis shows how all (or almost all) lose kilometers per hour of speed in the race, and this shouldn’t be surprising: the tires are less performing, the tank is full, but, above all ,the wind yesterday (which blew in the opposite direction to that of travel on the straight) played a fundamental role. That said, however, there’s an incredible difference between the 14.1 km/h Zarco lost in the  FP4 (session in which he recorded his record speed) and Vinales’ 4.4 km/h. Too many, probably, to be caused by the factors listed above. All the Ducatis lost many: 8km/h Bagnaia and 7km/h Jack Miller. Makes you wonder if the Borgo Panigale technicians turned off the power tap to preserve the bike’s consumption, crucial and always challenging on a track like Losail. But the Desmosedici engine was still among the most brilliant, at least when compared to Yamaha and Suzuki, so much so as to hand over the podium to Bagnaia and Zarco in the sprint.

Another interesting fact is what you see highlighted in green in our table: Pol Espargarò was the only one of the best nine to gain speed in the race and, expanding the discussion to the entire MotoGP grid, only one other rider succeeded: his teammate, Stefan Bradl. Honda, therefore, confirms itself as the bike that is less affected by gusts of wind, just like Pecco Bagnaia pointed out on Saturday.