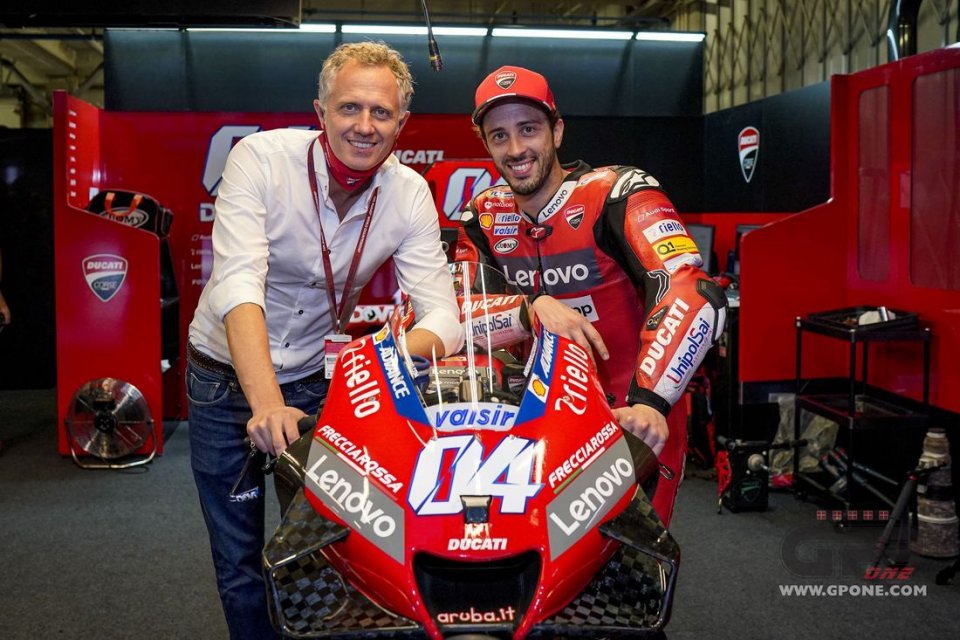 Andrea Dovizioso's name has been present on the world championshiptimesheets ever since the Suzuka GP in 2002. The rider from Forlì took part in all the races for a grand total of 19 years, without missing any. Last Sunday, however, there was no one called Andrea Dovizioso in Qatar. After bidding farewell to Ducati, he has taken a break from MotoGP, although in less than two weeks he is planning a test in Jerez, on the Aprilia.

Although Dovi was absent, his manager Simon Battistella was present in the paddock, because he follows another rider, Lorenzo Baldassarri, who races in Moto2 with the MV Agusta of the Forward team. “It was a strange feeling not to see the name of Andrea Dovizioso on the screens for the first time in FP1, he was usually the first - said Battistella - I also took a photo. Then I experienced the race in a completely different way, I didn't have that tension, emotion, excitement, I was a simple spectator, I didn't feel that competitive charge you have when you follow a rider you work with. Maybe I understood more about this race than about the others” he joked.

In a few days’ time we will see Dovizioso on a MotoGP bike again. How did the test with Aprilia come about?

"Massimo Rivola simply called me to find out if Andrea would like to ride with the Aprilia in Jerez and Dovi replied: why not? He wants to get back on the bike, also to keep in shape ”.

Will this test decide Dovizioso's future?

“Testing always gives feedback, whether positive or negative. I think that in this case it will only be positive, because in the end we have already seen, in this race but also last year, that the bike has some qualities, it was born well. I have no idea what this test will lead to, everything will depend on the project for the future. As Andrea always said, the project is everything, he wants to return but under certain conditions ”.

Why was it not organized before? There had already been contacts with both Aprilia and Yamaha…

"Andrea preferred not to have any ties with a brand all year round so that he could do motocross and relax. That's why it's easier to say yes to a single test than to a commitment for the whole season."

Let's imagine for argument’s sake: would a wild card this season be possible and under what conditions?

“It can make sense when talking about a project that Andrea is joining for the future. At that point, depending on the development, a race weekend could give much more precise results than those of a test. But it would only depend on this ".

After this test, will you sit down immediately at a table with Aprilia to talk about the future?

“In the meantime, it will be interesting to evaluate the feedback from both the rider and the team, then we will certainly sit down to make some evaluations. We could do it right away, I don't see why we need to wait. The team expects feedback from the rider and it is right to give it as soon as possible ”.

How is Andrea in these months away from MotoGP?

“More serene and carefree. And much lighter ”.

Does he miss MotoGP?

“Certain aspects certainly yes, because he likes to ride a motorcycle. There are many others that he probably does not miss, they are those things that all riders accept in order to do what they love. MotoGP has been his life since 2002 and he loves it ”.

“I would say they are high, 90%. Or at least I hope so (laughs). However, it is still early to talk about it, it is not a year in which all the contracts will expire so things are not moving yet. There is plenty of time to evaluate any interest from the teams ".