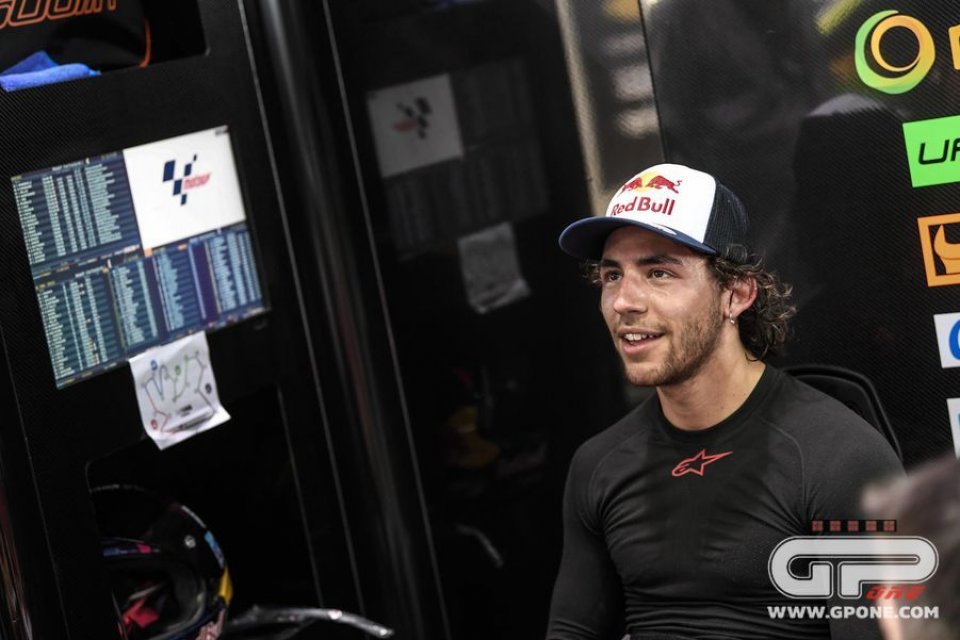 Same team, same bike, both rookies, but two very different results for Enea Bastianini and Luca Marini at the end of the first Grand Prix of the season, in Qatar. Enea took the chequered flag in tenth position just nine seconds behind the first classified, Maverick Viñales, taking home his first six points in the premier class. The other side of the coin saw Luca Marini finish in 16th position. The #10, on the Avintia Ducati, did not find the right pace in the race, and also struggled with speed. The two rookies will have the opportunity to experience what they learned today, next week in the Doha Grand Prix, which will again be held at the Losail circuit.

"I'm really happy with the race, I had a bad start because I couldn't insert the lowering device – were Enea's first impressions of the race - I was calm because it was the first race and I just wanted to finish it. After a while I felt good and I let myself go. I did a lot of overtaking until I got to tenth position. I wanted to get to seventh but I made a mistake in turn 6 and I settled for that. "

What were the most difficult things you found in the race?

"Certainly the first laps in the group and the braking, the benchmarks change a lot and with the other riders in front the bike stops less. It was not easy as it was the first time".

What surprised you the most today in the race?

"I learned a lot. The start was so-so, the first three laps were difficult with the new tires. But after that I started to do good times and step by step I reached the top ten. I tried to push even harder but in the last six laps I was tired and couldn't do anything more with my arms, it was impossible to finish in the top seven ”.

So you have pain in your arms now?

"I pushed a lot to try and make up the gap from the first group, I think I tried beyond the limits and it was difficult".

It is usually difficult for rookies to manage the tires and understand how they work. Was it a strategy you had already planned to be slower at the beginning and then push in the second part of the race?

“Yes, we prepared a strategy with the team. On this track I needed to be fast in the last ten laps. At the beginning I was very careful, then when the tires started to drop I started to increase the speed and I remained consistent for the last fifteen or so ".

When you finished the first lap you were 19th, did you imagine this final result?

“For me this race was a test. In the race, things are different, even the grip. The bike doesn't stop the same way it does while you are alone on the track, like in qualifying. It went well".

Jack said he had problems with the rear tire, especially in the middle of the corner, was it the same for you too?

“Not for me, the tire wear started after eight laps and then remained consistent. Jack spins it a lot in the first laps while I don't, I don't think it's the best thing in the race ”.

Did you ever think you could be a top ten protagonist, already in your first race?

"There was a part of me that was positive and hoped to get into the top 10, and I did it. The thing that surprised me most is that I finished nine seconds behind the first having lost six seconds in the very first laps. I think it was very positive, from the middle of the race I lapped as fast as the leaders. I am very happy, I could not have done more because I was a bit tired from the sixth to last lap and I was unable to get to seventh position ".

What emotions did you feel in the race?

"I only felt such strong emotions when I won the championship, perhaps a little stronger in that case. At the start I was very calm, I wanted to start slowly to understand how a MotoGP race works and to save the tires, which came in handy at the end ”.

How did the start go?

“It didn't go well. I didn't put the lowering device, I forgot it before arriving on the grid. I started without. If I had started better I would have finished ahead of Jack, I had a good pace. Maybe I could have aspired to seventh position, because I came very close. Next week I have to work on the time attack to get a better qualifying ”.