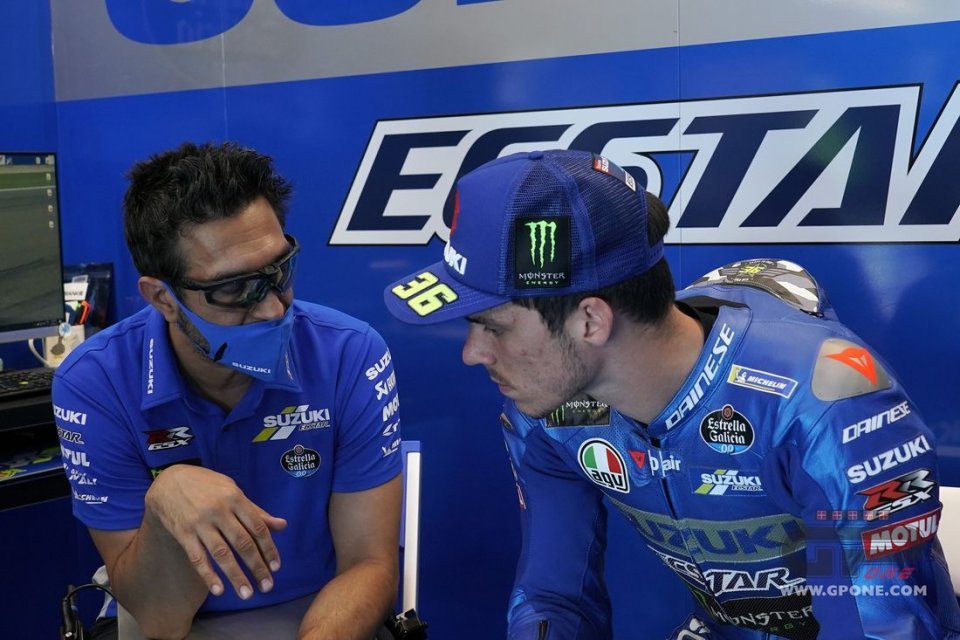 We already knew that the Losail track was certainly not one of Suzuki’s favorites. After the first qualifying of the 2021 season, the  rankings relegated the two GSX-RRs to the third and fourth row and more than seven tenths from poleman, Francesco Bagnaia. Something definitely didn’t work (also due to slightly different asphalt temperatures). A bittersweet outcome in some ways, thanks to Alex Rins’ fifth place in the second free practice session.

Forced from an “inconvenient” Q1, world champion Joan Mir only reached a tenth position in the following round. Right behind his teammate, and never really competitive this weekend, the 2020 MotoGP champion didn’t hide his despair for what happened.

“We’ve improved the race pace, though I’m disappointed with my performance in qualifying,” said Joan Mir. “I tried my hardest, but it wasn’t enough. In any case, I’m aware that we’ll be in the game tomorrow. We’re not as fast as I’d like. We don’t really know why.”

According to Mir, his main problem was entering corners, especially in braking. But the race is tomorrow and, in the  recent past, the Mir-Suzuki duo has always entranced the public with their sensational comebacks.

“I don’t have a good feeling when braking. We have to work on it. In the Q2, I wasn’t able to do a perfect lap because I was too aggressive. In view of the race, I’m confident because today’s result doesn’t reflect our potential. It’ll be important when managing the tires. Ducatis ride strong. Many will have their say.”

Alex Rins: “I expected more, I gave it my all”

On the other hand, Alex Rins will start from number nine on the grid.

“Today was a positive day. In the morning, I completed several steps. In qualifying, I managed to improve my time compared to yesterday. I expected more, but I gave it my all,” Alex Rins admitted. “The track conditions were different from the FP2, more complicated to interpret. We’ve moved forward electronically. I’m happy.”

Waiting for the warm up, a useful turn to dispel the last doubts and define the set up before the lights go out, the Barcelona native foresees a particularly heated race with several protagonists able to compete for the finale, obviously keeping an eye addressed to tire wear.

“Tomorrow will be a tough race. Some riders have gone into hiding, and we don’t really know their pace. The Ducatis are strong. Vinales held an excellent pace in the FP4. I think we’ll have problems racing constantly on the 54. That’s why we’ll have to adopt a strategy that won’t destroy the tires in the opening laps. We’ll try to get back into the fight for the podium,” he concluded.