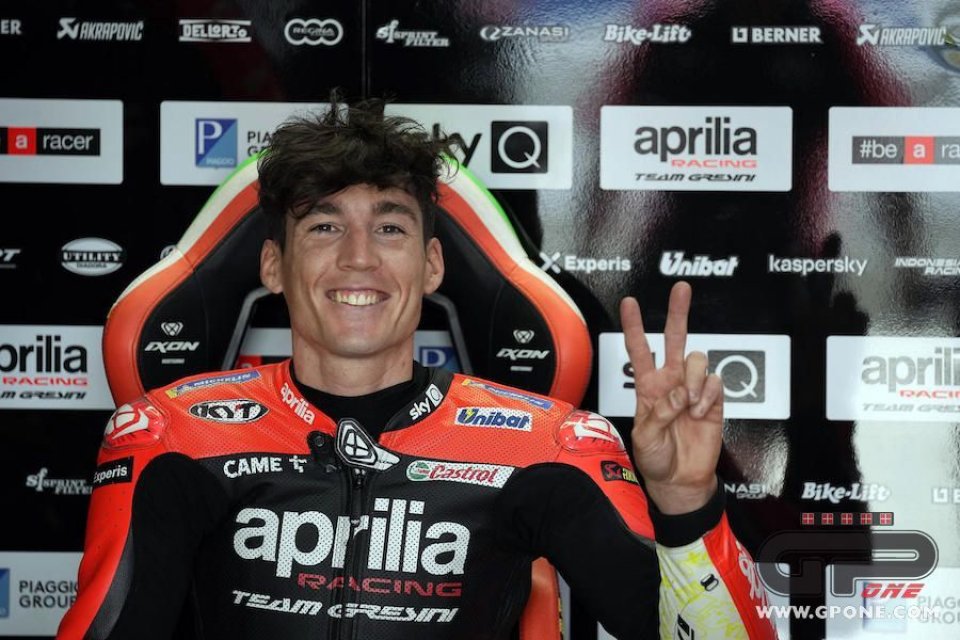 Tomorrow, Aleix Espargarò’s Aprilia RS-GP will start from the eighth place of the starting grid for the Qatar GP. Despite the test results and the excellent pace of the #41 in free practice, the Aprilia could do nothing against the speed of the Ducati and the Yamaha. 1’53.325 was his best lap in qualifying, a time that earned him a start from the middle of the third row.

"Honestly, I am a bit disappointed with how it went in qualifying – he said – I expected to be in the second row, at least in fifth or sixth position. I gave everything I had, in the last lap I rode over the limit. In turn 6 I lost the front, but for now I gave everything I could. If I hadn’t made a mistake, with just two or three tenths less I would have started from second position, but this is Qatar. In the last sector I lose a lot of time and it is very difficult to follow the Ducatis. I have three Ducatis and the Yamahas in front of me but in turn I am ahead of the Suzukis and the Hondas. I did a good job. I lapped in 1'53.315 and it is a really fast time  ".

How do you think today's performance went in qualifying and what are you missing?

"I think I went very well, the problem is that I kept losing the front. To be at the level of the Ducatis or the Yamahas, I have to be very fast in the middle of the corner because I’m lacking engine speed. With these temperatures the front was going away from me and I couldn't get speed in the corners. I was angry because I knew that I could not let go of the brake. But to be in the first race and to be aware of this problem, I can say that I am partially satisfied ”.

What are your expectations for tomorrow's race? What tires did you choose?

“Everyone keeps saying that in Qatar it will be a group race but I'm not so sure. We saw that there are differences between the riders in FP4, some Yamahas are really strong. The Ducatis in the race will go away, there is no chance to be ahead of them. I think the race will be a lot of fun but I don't think we will have a group of eight or nine bikes by the middle. We will see the race pace, however I imagine that a lot of riders will suffer tire wear before the middle of the race. I will put on two soft. In my opinion, Yamaha will suffer in the first part of the race to try to keep up with the Ducatis. Everyone will have their own problems ”.

Even today there was a bit of wind on the track, did it distract you or cause problems?

“Today was not so bad, we had a lot more wind during some of the days of testing. Tomorrow they told us that the wind will be against us. I don't want to be dramatic, here in Qatar when the sun goes down the wind picks up. We'll see what happens".

Is it difficult to find new benchmarks, such as when braking, every time the wind changes?

"Yes it is. The problem is not just the strength of the wind. I remember that in the first days of testing there was a lot of wind but it wasn't strong and it wasn't difficult to ride. During the last few days, however, there was less wind but it was blowing in a completely different direction and a lot of riders, including myself, crashed. It all depends on the direction in which it blows, it is difficult to manage ”.

In qualifying today you said that the bike was at the limit but your pace is good, what will happen tomorrow?

“Difficult to say. During FP4 I did a lot of laps and Maverick was in front of me but not by much. I think realistically I will be able to fight in the top 6 tomorrow. If it’s a group race, I think I will try to save the tires to try and be competitive in the last laps. I'll try to do this and then cross my fingers for the end of the race ”.