Hungary wants to return to the MotoGP and will build a brand new circuit to do so. At the moment, the Government is assessing the various projects, and one of those is Italian, from Jarno Zaffelli’s Studio Dromo. Among other things, Zaffelli created the Termas de Rio Hondo track in Argentina and is currently completing the modifications to the Franciacorta racetrack.

Above is  a simulation video of the new track, which will be 5 kilometers long and will have 15 turns. The computer predicts an ideal lap time of 1’38”7, with an average speed of 184 km/ h, which would make it the second fastest in the entire World Championship. Speed, yes, but also safety and, in fact, the Italian designers made use of  the DroCAS, a simulator that assesses the best measures to be taken for both the MotoGP and Formula 1.

The Hungarian circuit is designed to facilitate overtaking, but without resorting to the usual hairpin bends. The first overtaking hotspot is Turn 1, very fast, which offers the opportunity for riders to stay close to each other until the second hotspot, Turn 3, which should provide a perfect opportunity to finish the overtaking maneuver. Then, Turn 5, thanks to its generous bank, encourages competitors to try the inside line to pass. After a demanding technical sector, from Turns 6 to 11, a new overtaking opportunity opens up at Turn 12. The longest straight on the track also offers the best opportunity to take advantage of the speed and complete a pass at upcoming Turn 14. 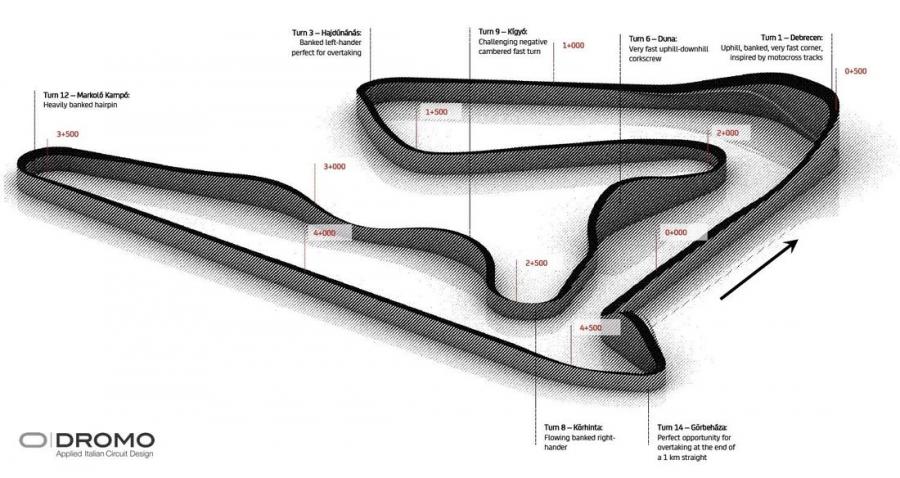 Zaffelli explained to us where the inspiration came from: “From the old Assen circuit to the classic Suzuka, from the fastest Termas de Rio Hondo to the formidable Philip Island, the riders’ favorite.”

Lots of attention was also given to the spectators and the stands, which were designed to offer almost a 360° view of the track. All that remains is to see it go from paper to reality, and we’re all really curious to see the MotoGP riders at work on this track.