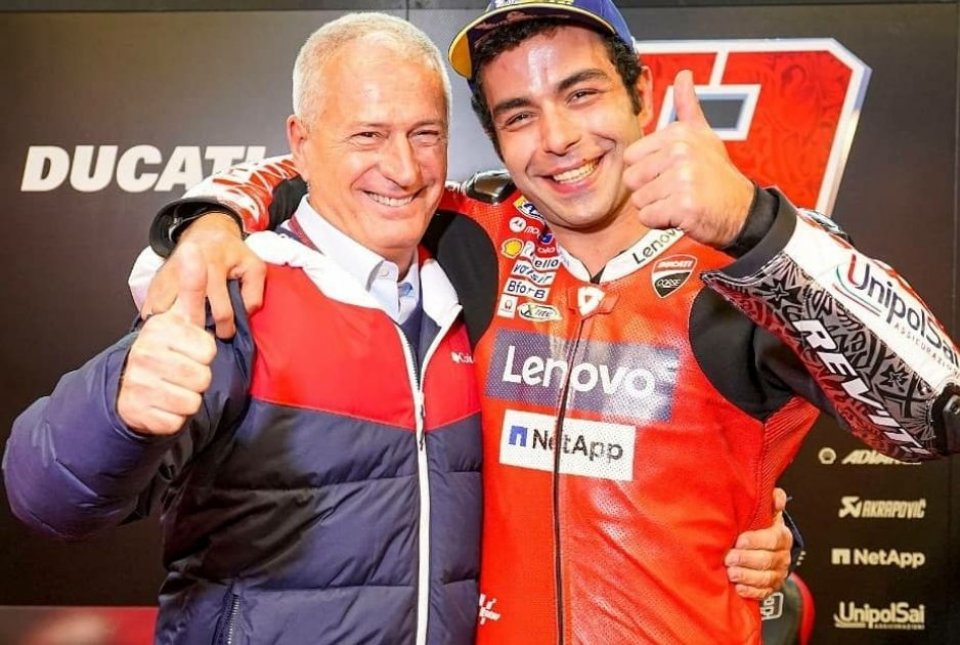 From Checa to Petrucci, via Stoner, Melandri, and many others. Alberto Vergani is one of those managers who needs very little in the way of introduction, since he has made the fortune of several riders in the two-wheel paddock.

His latest coup was that of Petrucci with KTM Tech3. After being dumped by Ducati, there were a lot of doubts and questions regarding the future of the rider from Terni. Instead Vergani pulled a rabbit out of the hat, placing him in Poncharal's team. Danilo’s adventure with KTM began two weeks ago in Qatar, the only thing to do now is to wait for the start of the season.

"We’re almost there now, just a few more days - said Vergani – I’ll be leaving for Qatar next week as well to be alongside Danilo for the first race of the season with KTM. There is a lot of expectation from him for this new challenge and I am confident about his potential, given that Petrucci is a strong rider and one of the few to win in the last couple of years. "

Alberto, in the Losail tests it seemed that Danilo struggled to find the right direction with the KTM. Is that the case?

"He was used to the Ducati, which allowed him to put the bike sideways, while the KTM has a lot more grip and in this respect he is struggling a bit more. However, I consider the tests particular, because the situation always changes in the race. The anomaly of this season is that the riders will arrive at the race with only three days of testing and Danilo will do so on a bike he has never ridden before this year. But I know him, he's a tough guy, he is pissed off enough proactively to do well. It is better to start and then take one step at a time, rather than starting and having already arrived. Certainly what we saw in the tests does not correspond to the real potential "

Our Carlo Pernat, in a recent Bar Sport, declared that Petrucci had been disappointing...

“Yeah, we know Carlo (smiles). Qatar is a Ducati track and I am convinced that he can do well. Petrucci is just at his first contact with KTM and until now he has never looked for a fast time. In fact, his priority was to find the right position on the bike, then focus on the weight distribution, and find confidence with the bike. Among other things, Oliveira and Binder also struggled".

So there is nothing to worry about…

“I would say no, because you don’t win the season in Qatar. Danilo is stoked, serene and enthusiastic and this was the change he wanted. He really needed it. It's a bit like when you change cars. He felt good at Ducati, but a change always brings something new. So I am convinced that with this bike he will show his potential, also because KTM believes a lot in him ”.

Petrucci has a one-year contract with KTM with an option . However, there are young guys like Gardner who are aiming to make the leap into the category in 2022.

“Right, but let’s not get ahead of things. We need to take one step at a time. KTM likes Petrucci, because he is a strong rider, but at the same time he’s also cheerful and a hard worker ”.

Let's talk about his former teammate Dovizioso. Did his arrival in Aprilia surprise you?

“He saw the bike was competitive and took the leap. What can I say about Dovi, obviously I'm not him, but if I were his manager I would have had him sign earlier. There was no point in waiting that long. If his desire was to return, he could have signed the day after last season finished, without arriving at today ”.

Now the problem is Savadori’s…

“Exactly, correct observation. Aleix has a contract until 2022. If Dovi were to race next year, Savadori could consider the role of test rider or a future in SBK. 2021 has not even begun, but a lot of people are already thinking about 2022 ”.

Who’s going to win in Qatar?

“Ducati was really competitive in the tests. I think Miller has a good chance, as well as Zarco and Bagnaia. But I wouldn't rule the Yamahas out either. Then there is Marquez. I heard Agostini say that he has to race and finish last. I am convinced that Marc will go to Qatar to get on the podium and maybe, if he is in good shape, he will even try to win ”.

And your friend Lorenzo?

"Jorge is enjoying some relaxation in the Maldives, I saw that he posted some photos on social media. In my opinion, however, he is getting bored, he is having withdrawal symptoms from bikes. Let me explain: Carlo Checa, when he retired, decided to do so after profound reflection and in the following months, whenever I heard from him, he was always happy and enthusiastic about the decision he made. Jorge, on the other hand, seems bored to me, because he quit at the age of 30. It's like when you go on vacation. If you are away from home for 2-3 weeks you will enjoy your holiday. But if you stay out for a year, after a while you're bored. And Lorenzo in my opinion is in that situation. It is the theory of marginal profit, I learned it when I was studying at the Bocconi ".

We spoke about Aprilia earlier. As you well know, it was hit hard by the death of Gresini…

“It is a story that touched me too, given the relationship I had with Fausto. I heard it on December 20, we were to have met up with each other, but then we couldn't organize it. Gresini was special and now it will be up to his family to evaluate how to move for the future. I remember when Fausto wanted Pedrosa, but the negotiation with Dani was not easy. I then suggested Melandri. I called Marco at midnight to get him to meet with Gresini. That was a moment that I will always remember”.