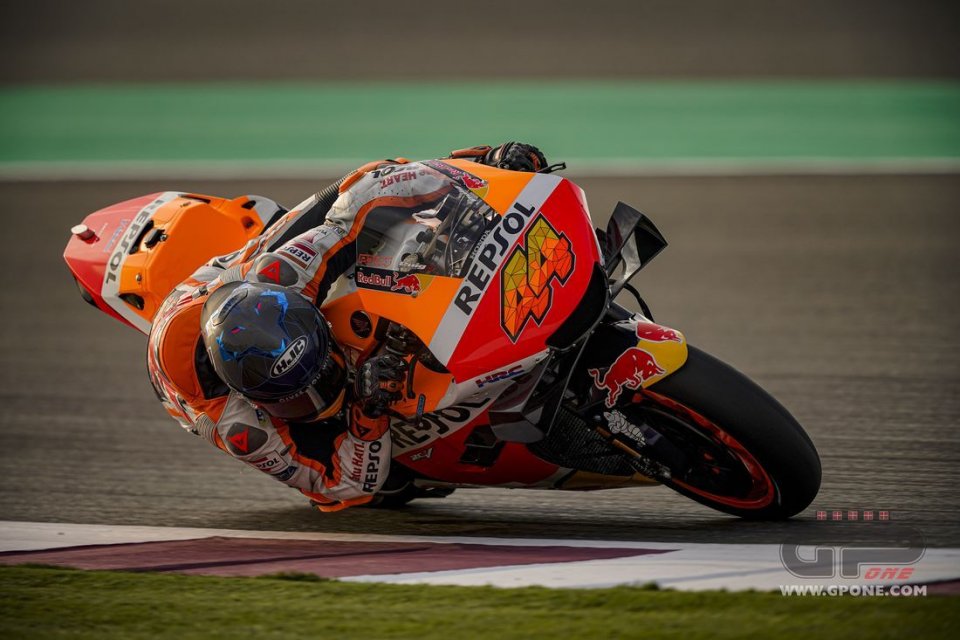 With Marc Marquez still absent, the Repsol Honda Team HRC is continuing its work and development program on the Losail track with their new entry, Pol Espargarò. Unlike his brand mates, Stefan Bradl and the LCR Team duo, this is the Spanish rider’s very first time on the RC213V. After the fourth day of official tests in a 10th position, eight tenths of a second from the top, Pol was the victim of a harmless slip during the opening minutes of the session.

“It was really strange. It wasn’t a Honda-style one,” he specified. “I would've expected such a thing in qualifying, when we push to the limit, but it happened shortly after the start of the session. Compared to yesterday, we found a lot of headwind, plus, we were using tires that were not suitable for those conditions. I fell when entering the corner, but I’m not worried. I simply should have been less frenetic.”

Despite the large gap from Maverick Vinales’ reference today, the rider from Granollers was one of the few to have had his best lap in the afternoon. Suffice it to say that the 1’54”103 dates back to the passage of number 22 of the 65 completed.

“The time obtained is good, then I got back on track with the same set of tires and we made several laps in 1’54” high and 1’55” low,”  he said. “One pace is interesting from a race point-of-view. In the evening, we completed a new simulation and struggled more than expected but, overall, it was concrete.”

Without a shadow of a doubt, the process of adapting to the prerogatives of the Tokyo constructor’s bike requires more time, confirming the words of the rider.

“Unfortunately, I’m still not aware of my real potential. At the moment, we’re competitive on average. We’re close to the leading group, and this is positive. We’re only at the beginning of a long journey.”

Far different from the characteristics of the KTM he rode until last year, the RC213V seems to adapt perfectly to the strengths of the 2013 Moto2 Champion.

“I think it’s perfect for my driving style. I’m really enjoying riding it.  At each exit, the feeling increases considerably, I think we could take away some satisfaction this season. Now I’m starting to understand how to exploit the potential of the bike. Clearly to reach certain levels you have to dare, that’s why Marc is often in the balance and sometimes ends up on the ground. With this engine configuration, you have to push a lot, and I like it .“