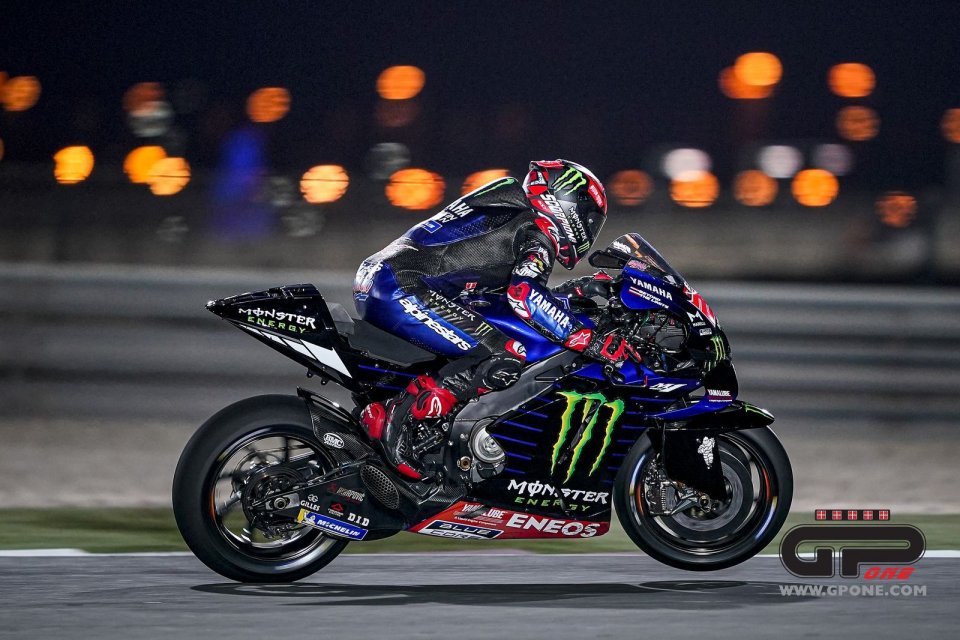 A memorable day for Yamaha in Losail, with the three M1s leading the day's standings. Maverick Vinales was able to top the timesheets, getting the better of Franco Morbidelli and teammate Fabio Quartararo. It was a virtual front row that does not bring points however and means nothing for the standings, but which certainly represents a huge boost of confidence in view of the first two races of the 2021 world championship, which will be raced on the same track that produced this result today.

Fabio Quartararo finished in third position, and was surprised by what emerged from the day. In fact, it seems that despite not having any exceptional feelings in the saddle, the latest changes allow the Yamaha to be very incisive.

The M1 seems to be doing very well in Losail. Will it be the same in the race?

"These days we are experiencing completely different conditions from those we will find in the race. Now we have unreal grip. I don't think this is the level of grip we will have in the race. I think in Portimao or on tracks where there is little grip, we could suffer. It is not normal to find three Yamahas in front of everyone. On the single lap we are fast, in tests we are fast and we always have been. But this time I don't want to make the mistake of the past of having too much confidence. I want to race first and then understand".

How's it going with Crutchlow, did you talk today?

"Cal is a very intelligent and straightforward rider. I've talked to him several times, I like him because he says what he thinks. If the bike doesn't go well, he doesn't beat about the bush. I think Yamaha needed a test rider like him. He’s fast with the M1, despite not having ridden it for many years. Today he did some more laps, I am happy that he is part of the team and for my part I am pushing to do as many tests as possible with Cal. "

Have you got a precise idea of ​​the bike you will use for the first race?

"I have a very clear idea, I know what my M1 will be. Today we had a bike with which I did my fastest lap with tyres that had 15 laps. I know which bike I will be using on Friday in FP1. We have another day of testing, but we have this base that works very well. "

Will the sensations on the bike or the lap times decide which bike to use?

"Even if the sensations are not so good on the bike, I think that if the times are good, they will speak for themselves. Not so much the single lap time, but the race pace. We did some good things on the pace, now we know very well what base to use when there is a lot of grip on the track. We need to see in the race what grip we will have, but I'm pretty sure what to do for that weekend. "

Vinales: "We need to improve the start and try the M1 on tracks with little grip"

"At the moment we have to improve a lot the start and it is complex - confirmed Vinales - because we have to try to progress from a mechanical point of view. We are trying several things and we have improved but we are not yet where we would like to be. Tomorrow we will do other back-to-back tests with some modifications" .

The M1 was strong today with everyone, but there is also a lot of grip in Losail, a situation that this bike digests well. Are you worried that on tracks with little grip things could change?

"We are working very hard on that area. You certainly don't know the reality until the situation arises where there is actually little grip on the asphalt. We are optimistic in any case, because we know that in those situations we can take benefit from our chassis and our speed in the middle of the corner. I'm curious to try this bike on asphalt with little grip, because at the moment the times arrive very easily and I would like to understand if even without grip we can repeat this at a high level. "

There seems to be the possibility of vaccinating the entire paddock before the Qatar Grand Prix. What do you think about that?

"I haven't talked to the team about it yet, but it certainly is something that can protect you and that is needed."