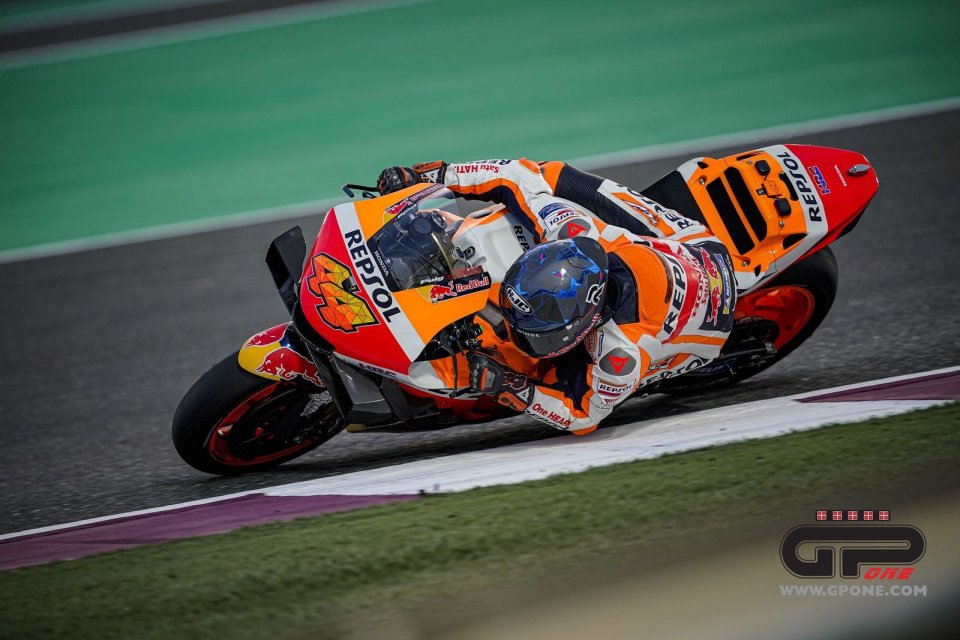 Pol Espargarò is one of the very few riders to at least have made an effort to go out on the track, on the last day of testing in Qatar. Obviously, the sand blown onto the track surface by the strong wind did not allow the Spaniard to carry out any tests scheduled for the day. The Honda rider will now fly home, awaiting the first Grand Prix of the season, after receiving the first dose of Pfizer's Covid-19 vaccine in the morning.

Compared to your expectations, how did these tests go? Better, worse, or more or less did you find what you imagined?

"Before actually arriving in Qatar it was difficult to imagine a result, because I only had in my head ​​Marc Marquez who was always beating us and also by a lot. It would have been too difficult to speculate at what point I would have been at - said Pol - If someone asked me what the sensations are for the start of the championship, I would say very good. I get along very well with Honda, with my chief mechanic, Ramon Aurin, with all the guys. They are both happy and surprised at the same time. I feel very good and I am grateful, but they say there is still a lot to learn so it is not enough ".

Many riders said they disagreed with how things went today and that they couldn't test. But your tests went very well so maybe you don't feel frustrated?

“Yes, I don't feel so frustrated because things have gone well. I actually had plans today, I should have done a long run with new tyres because yesterday I did it with used tyres for five laps. I had a race simulation planned but I couldn't do it. I was supposed to have tried to do a fast lap as well because I feel much faster than what I have shown. I must say that a total of four days of testing on a bike like the Honda is not enough. But that's the way it is and it is the same for everyone, even for rookies ”.

Didn’t you even have one opportunity to try a long run?

“Yesterday I tried to do one but I didn't do many laps, about ten. I had used tyres and I think I lapped in a low 1’54, and it was fantastic. In the afternoon I tried to do a race simulation with used tyres but we had some problems because they weren't going very well. I had to push, let the tyres cool and then start pushing again. In fact, today I should have started by putting on new tyres ”.

Did you try the same fairings that Bradl had?

Yesterday in some photos we could see that you were somehow adjusting your race suit on your right arm. Do you have any problems?

“No, no, that's something I usually do. If you notice I never completely close the leathers, I leave it open a little. It's something I've always done. I have no problem but it's something I keep doing all the time, superstition”.

Did you get vaccinated? What do you think about the whole thing? Will you go home before the race?

“Yes, I am vaccinated. I think we all have to be responsible, we travel around the world, we come into contact with thousands of people in different countries. We could infect both the people we find in the next nation and our loved ones at home. This is our responsibility. Yes, I'll go home”.

You spoke about wanting to find the limit and trying to get the most in the middle of the corner. Yesterday you crashed and it was a strange situation. Do you think you have found the limit or will you still have to look for it in free practice?

“I can't say I know what the limit is, sometimes I can recognize it and sometimes I don't. I had to change the tyres several times to understand what their performance is and to find the combinations that are right for me. The Michelin tyres are very difficult, not only for the Honda but for all the MotoGP bikes. I think I still don't have the situation under control on the front. I still have to understand the tyres to use and then I will be able to work for the race weekend ”.

Do you think you can solve these problems in Qatar?

“I think we should go first to different circuits such as, for example, Portugal or Jerez, where there is a different asphalt. You have to try different combinations and then with the engineers I will be able to work on the set-up of the bike. I have to try to understand the limit of the tyres ”.