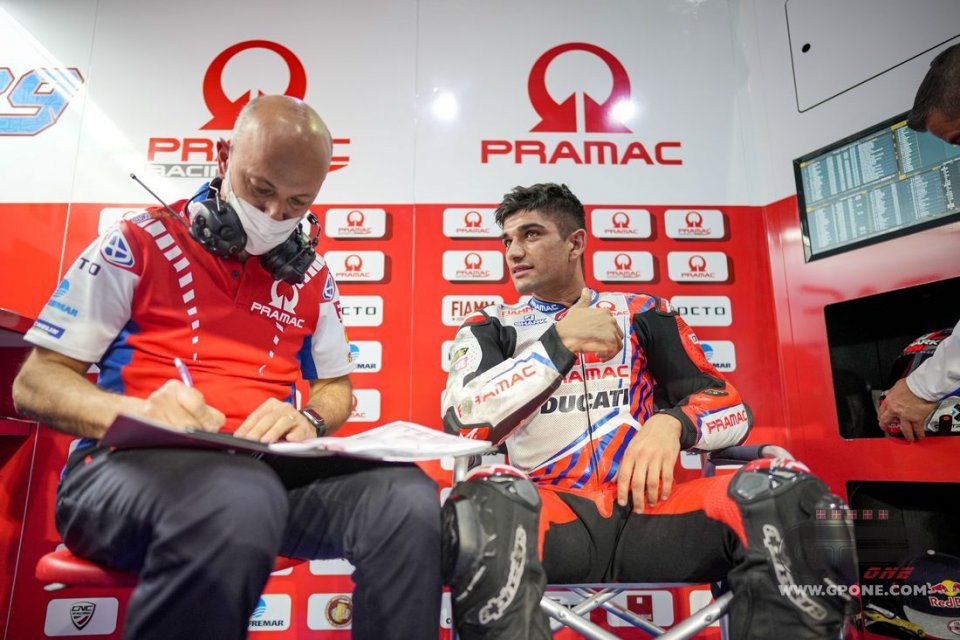 Jorge Martin’s smile says a lot about his MotoGP debut on the Ducati, which is portrayed as a very difficult bike. But Pramac’s Spanish rider thinks differently: “I think it’s an easy bike. When I told Gigi Dall’Igna, he laughed,” Jorge confessed. “But that’s what I feel.”

It’s just as well, because Jorge doesn’t have much time to get used to the Desmosedici and the category before the opening race. They’ve already tested for five days and there’s only one left before the start.

“It’s useless to think too much about it. This is the situation, and I just have to take advantage of it,” he explained. “Of course, it would've been useful to try on another track too. This means that, when we go to another circuit, it’ll be like starting from scratch, but that’s the way it is.”

So, better focus on the race in Qatar.

“I feel ready,”  Martin said. “Today I did a long run of 14 laps with a full tank, and I kept a good pace, but the most important thing is that I always rode alone, getting my references, and that’s not easy in the MotoGP. During the race weekend, I’ll ride with the other riders, and this will allow me to learn a lot. But even now, I think that being in the top ten in the race is a realistic result.”

Jorge knows there's still room for improvement and also where.

“On the flying lap, I’m not that far from the best.”  He was a second from Quartararo today. “And I can practically improve in every corner. I’m getting closer, and I think that tomorrow I’ll be able to take a big step forward. I feel especially good in acceleration. I also recuperate on the factory riders. The problems are when I first hit the gas and in entering corners. It’s. above all, something mental, because the Ducati is incredible, it allows you to do a lot. In the Moto2 and Moto3, you felt the limit. In the MotoGP, instead, you think you’ll enter really fast, but you still have margin.”

Today Aleix Espargarò tried to give him a hand.

“We’re friends. He saw me come out of the pits and motioned to follow him,” Jorge said. “I had the medium tire on the front, which I then fell with, and I only did one lap with it, but I saw a lot of things where I can improve. Following someone is not always an advantage, it depends on the bike. If you do it with a Yamaha, you only risk getting confused.”

Speaking of the fall, Jorge discovered how sensitive the MotoGP bikes are to the wind.

“I fell at Turn 15. Today the wind was blowing in another direction. You can feel it a lot with the wings. Anyway, I’m fine. It was useful to work a lot today because the wind might not allow it tomorrow,”  he concluded.