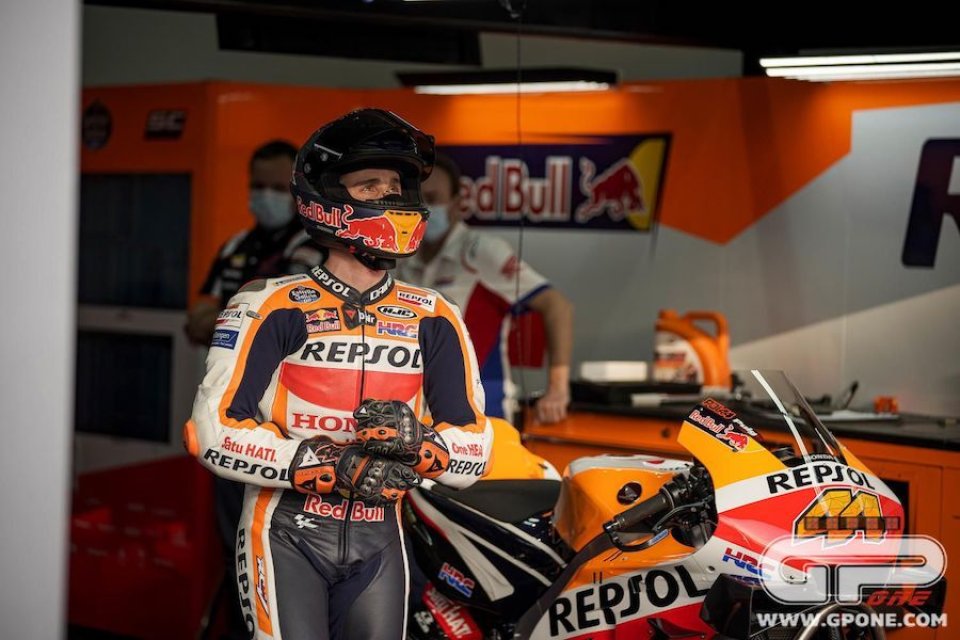 Pol Espargarò’s period of adjustment on his Honda is continuing in Losail, and he’s faster than expected. The former KTM rider from Spain  closed his third day on the RC213V today and has already given his best. He’s 5th in the rankings, but he’s worth a 4th, since he had the same time as Zarco, who precedes him, and is just 7 tenths from Miller’s record time. Not bad considering that the Honda was described as a nightmare for those approaching it for the first time.

Pol, what changed today?
“I still have a lot of work to do on the limits of this bike. I was afraid of doing the first race not knowing when the front would close. Today I did some laps at the limit, and I learned something more. I felt the front close a couple of times, but I didn’t crash and there I said, ‘ok, this is the limit’.”

How stressful is it for you to wait for the first fall with the Honda?
“It’s stressful, especially on the flying lap. When I try the race pace, I feel more relaxed, and I have the situation under control. Instead, when I push, I never know if the rear is about to launch me or the front is about to close. If I push even harder tomorrow, I don’t know what’ll happen.”

What are your sensations at the end of this third day as a Honda rider?
“I still don’t feel comfortable on this bike. Certainly, there has been an improvement in these days, and I’m faster than I would have expected. My reference is constantly changing because I’m improving, but what’s more important is consistency, and that’s why I’m happy today. My race pace is better than my flying lap.”

Have you tried any of the innovations implemented by Honda? Is Marc’s absence, just like last year, making the bike suitable for everyone?
“Today I put myself to the test  on the bike, but the day started with trying out some electronic stuff and then moved on along those lines. It’s probably the first day that we’ve done so many tests, and I’m happy with that. Regarding Marc, I honestly can’t answer because I didn’t try last year’s bike on different tracks. I don’t know if it was easier or more difficult, but I’m certainly getting along well with some innovations that Bradl and Alex Marquez have also tried.”

As for Bradl, have you tried to work as a team?
“We were supposed to work together today, but he fell and stopped. We’ll do it tomorrow or Friday.”

What do you think of this ranking? Your opponents are fierce and the times are showing it.
“Now we’re just doing tests. Everyone can push hard and, even if you fall, nothing happens. You can’t do this on the race weekend because we have a certain number of tires, and you can’t waste them with a fall. You have to be more careful. Now it’s as if we were free, without pressure.”

Stefan Bradl also worked a lot these days, but he had to stop today after 15 laps due to a fall.

“We had another good start to the day, and I felt good on the bike. Unfortunately, I fell at Turn 2. This was a tough corner for everyone in these tests, but I was pushing to the limit. The fall itself wasn’t a problem  but, when I got onto the gravel, I rolled quite hard and felt sore. I went for a medical check-up, and there’s nothing serious, but we decided to rest today because we still have two important days. My goal is to recover immediately.”