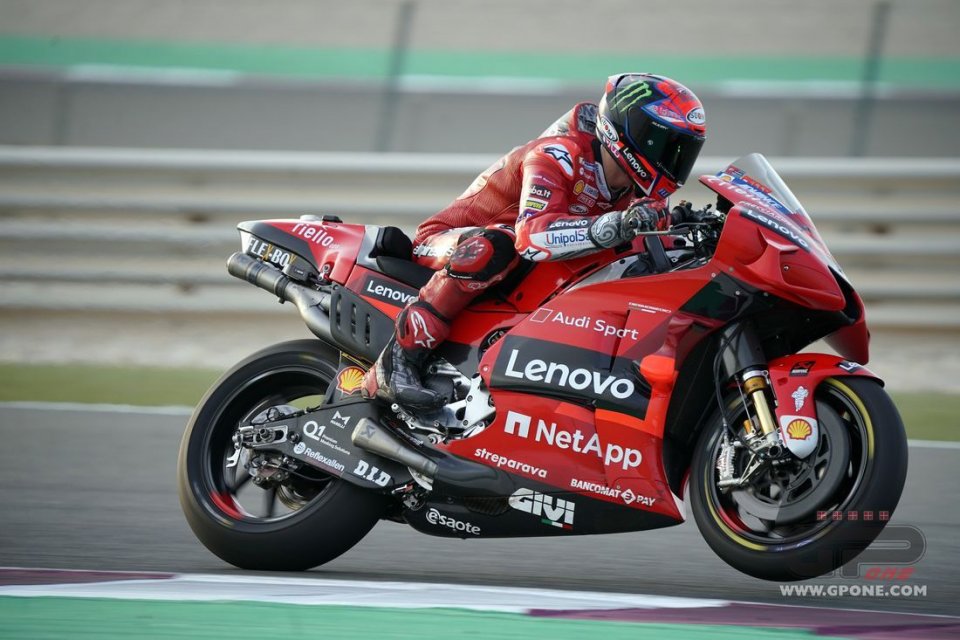 Pecco Bagnaia ended his third day of testing in Qatar with the ninth time, not a bad result but the gap from Miller was a second. As always, you have to interpret times set during the tests because the Ducati man did not go looking for a fast time, preferring to concentrate on race pace. In fact, he was not disappointed at all: “On the contrary, my balance is very positive. I tried two different setups and it took time, but I always kept a very good pace and that's the most important thing,” he said.

So you are not bothered about your teammate's time?

“We know that he is strong over one lap and I did not try to do it, it is scheduled for the next few days because it is always important to start from the front in the race. I knew that the track conditions were very good today and that there would be fast times, like those of Jack and Quartararo ”.

You spoke about two different settings…

"The balance of the bike completely changes and also the position on the saddle, they are practically opposite to each other. Both have pros and cons, we wanted to try them out and then decide which one to continue with because right now it's easy to get confused and we don't want that to happen.

What is your plan for the last two days of testing?

"I still have something to test, as I said I have to choose which setting to continue with, then do a race simulation, try the time attack, I want to be sure I'm going in the right direction".

Do you still have some doubts?

"I want to be sure about my pace, then I will concentrate on setting a fast lap which is usually not a problem for me, as we know."

Have you already managed to get an idea of ​​the level of your opponents?

“It seems to me that as far as the pace is concerned, Vinales is the fastest, he is always competitive in the tests. I think all the Yamahas have a good pace but, in the end, if you look at the top 9 riders in the standings they all have a similar pace. But I don't think that in the race everyone will lap with the times we saw in the tests ”.

Bagnaia convinced Dupasquier's tragedy can be accepted, but not forgotten