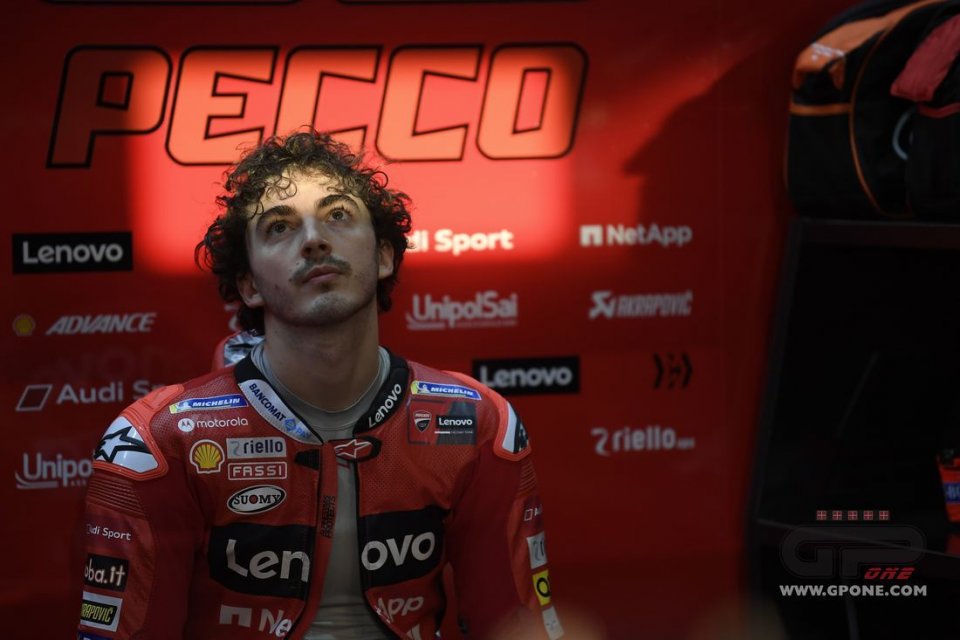 If yesterday it was Jack Miller who held the Ducati flag high with the new track record at Losail, today it was Pecco Bagnaia who had the satisfaction of being the first Ducati rider in the standings. The man from Piedmont finished 4th behind the Yamahas.

"I did my first time attack of the year, it didn't go badly but I have to admit it wasn't easy," he said at the end of the day. However, it was not that lap that made Pecco particularly satisfied.

"I am above all happy with my race simulation - he continued - I did it with the tyre used for the fastest lap, and it is never the best thing, but I managed to be just as consistent and fast. I'm really happy with the work done, but we still have to improve the electronics for the race. "

Bagnaia has also chosen which one of the two setups tested in recent days to continue with...

"One makes the bike more nimble and performing, the other more comfortable and stable - he described them - In the end I preferred stability, because that's what I need for my riding style. Now we have finished the whole program that we had set for ourselves and I feel very good and competitive on the pace. Everything is going in the right direction ”.

It's also time to give an overview of his opponents…

"I saw the Yamahas very fast, like the Ducatis and the Suzukis, especially Mir seemed in very good shape – was Pecco's opinion - These seem to me the three most competitive bikes, in the race the story will be different, but we are ready. As for Aprilia, I know they have invested a lot and taken a step forward, Aleix was very fast in testing last year too. Their bike seems to work well, I will be pleased if they are competitive ”.

Jack Miller: "My best tests since I've been in MotoGP"

After yesterday's blistering time, Jack Miller prepared for the race today with a 21-lap simulation that did not disappoint.

"I started the day with medium tyres to do some tests with the new fairing, then I mounted two soft tyres for the long run - he said - I would say it went relatively well, apart from when on lap 10 I almost crashed at Turn 4, the front went away from me. I kept a 1’54” pace, going up to 1’55" in the last 5 or 6 laps because the rear tyre was finished, it was vibrating. However, I have nothing to complain about after this simulation, it’s something I worked on but I kept a fast pace, even if you have to consider that the track has a lot of rubber on it, it will be different in the race ".

Tyre management will be crucial…

"It has always been like that at Losail, in fact Dovizioso in recent years waited before pushing - recalled Jack - However I think these have been my best winter tests in MotoGP, yesterday I did a good time and today I'm happy with my race simulation, I feel comfortable on the bike. I just still have to figure out what to improve at Turn 10, but it's normal to struggle at that point with the Ducati ”.

Miller is now preparing for the final day of testing with the knowledge that he has given his all...

“I tried to do everything I could, I'm happy with my performance. I remained calm and adapted to the new team, all that remains now is to find out what it will be like in the race” he concluded.