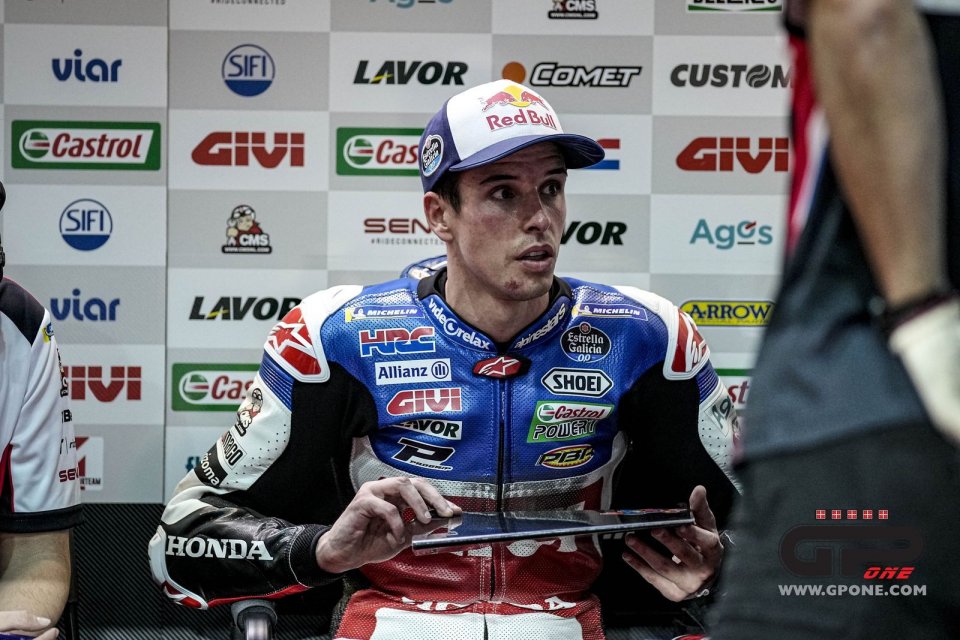 Today's session ended early for Alex Marquez. The LCR team rider was the protagonist of a high side in turn 9 and picked up a small 2mm fracture in the fourth metatarsal of his right foot. 1'54.692 was his best time today. The Spaniard was temporarily declared unfit to go back on track. Despite this, Alex declared that he was ready to get on the bike again, in case the doctors were to give him the okay tomorrow.

“In the first part of today's session I tried a lot of important things. Actually, in the morning I rode with somewhat strange conditions because in the race we won’t have the same situation. In the afternoon I changed the tyres and tried to set a good time to improve but I crashed. After all we are here for this, to try new things – were the words of Alex Marquez - I crashed in turn 9 and it was a high side, luckily I'm fine. I have a small fracture in my right foot. For now the doctor has said that I am not fit to get back on track but if we have good weather conditions tomorrow I will try to convince him. I feel good and I think I would have no problems on the bike ”.

You said you'll have to work a lot tomorrow. Do you still have a long list of things to try?

“I still have to work to be ready for the race. I have to focus on the race simulation, the time attack and other things. I crashed in a corner where I was already very fast because I was trying to pick up the pace. I went a little further and made a mistake. I will have to turn my attention to the other corners where I’m losing something, at that point I am already doing very well. I have to try to control my limits. I'm sorry for the team because I’ve crashed several times. In Qatar there are always a lot of them, it's difficult to understand the front tyre well in high temperatures ”.

You have had several crashes in these two test sessions, what do you think about that?

“I think everyone crashes. I must admit that it is difficult to understand the performance of the medium or hard tyre on the front in these conditions. We don't have a lot of information and it's easy to lose control. At the beginning I tried to put on medium tyres, it went slightly better but there was not much feedback on the front and that's why it's easy to slide. If I don't have the chance to get out on track tomorrow, we would still have enough data to start the season well. If the doctor says I'm ok then I'll try. In 2017 at Le Mans I raced with a more serious fracture in my left arm while now I have a very small fracture. Anyway, it wouldn't be a problem not to go out on track ”.

After the last two years spent in MotoAmerica, next season Hector Barbera will return to racing in British Superbike with TAG Racing Honda
1 day 1 hour ago

The first of four episodes will be available starting January 27th, while the final episode will be released on February 7th. For now, it’ll only be...
5 days 19 hours ago