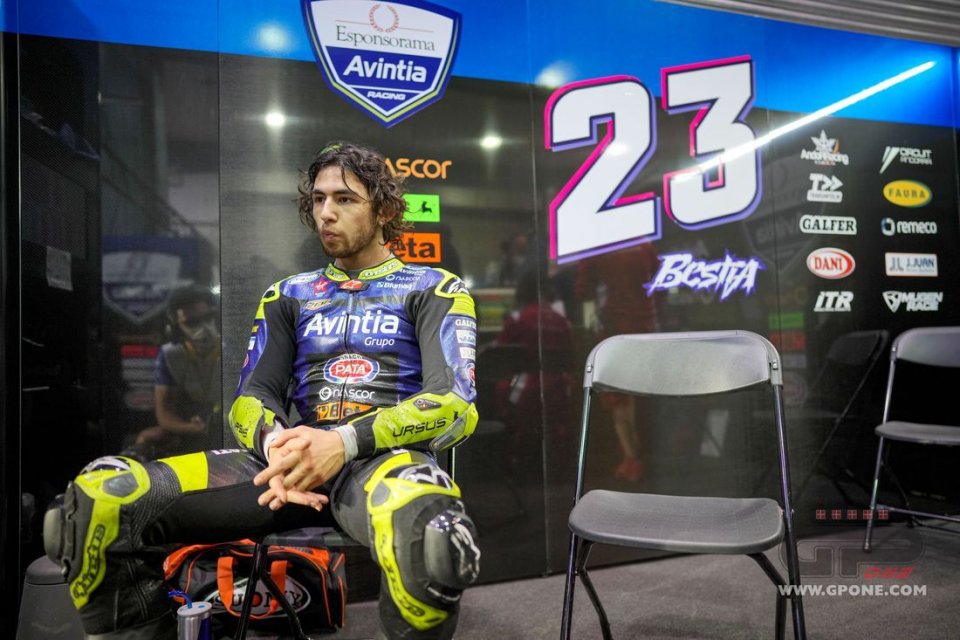 The first of three further days of testing at the Losail circuit in Qatar has come to an end, and it was a good session today for the Esponsorama rookies: 1'54.738 was the best time set by Enea Bastianini. The #23 started to shave tenths from the times of the previous practice sessions, recording a gap of 0.8 seconds from the fourth best time of today by Johann Zarco. Further down was Luca Marini, with a time of 1'55.328, who focused on improving his performance in mid-corner.

“Today was a good day and it was nice to be back on a MotoGP bike. I am happy because I immediately felt at ease and was more relaxed than in the past three days - said Enea at the end of the day - I started working on the setting because I felt that the bike was a bit nervous and I could not open the gas. I had a good pace and was lapping in 1'55 more or less on all my exits. I'm not saying I was in line with the best but I was with the group immediately outside the top 10. Tomorrow I'll have to make a further step forward and try a long run, a sort of race simulation. I'm happy to be the first of the rookies but it means little and I have to keep working so concentrated. There is not much of a gap from the fourth time today, but there is a lot from the first. I’ll have to have a look at Jack's data so I can see where I’m going wrong ”.

The balance of this first day of the second part of the test is positive.

“More than positive! I think I have to loosen up a little bit more in the saddle, but overall I'm happy. I still have to refine the details but I managed to do the bulk of the work, now the best part comes because this is where the sacrifices begin to bring down the tenths”.

Today you went very well, it seems that you adapted to the bike very quickly, what do you think?

“I feel better, also because that last session was difficult for me. I was able to adapt my style to the bike and for this reason it was better. It was easier for me to go fast especially in the last part of the tests."

How did these two days off go? Did you have time to do any analysis?

“We analysed some data, especially Jack’s because he is really fast on this track. It was essential for me to compare them today and it will be the same in the next ones as well”.

"Today was another good day - were the words of Luca Marini - I worked on the setup of the bike and on the use of the tyres for the race pace. Towards the end of the session I decided to do a long exit of ten laps just to try to understand tyre wear and how to possibly manage it with the help of the electronics. I must admit that the pace was good at the end. I want to try to start the day well tomorrow because I will try a race simulation ".

After the end of the first few days of testing, and considering even today, did you think it would be more difficult to adapt to the bike and understand how a MotoGP works or is it going as you expected?

"Honestly, I expected it to be a bit more difficult, especially trying to set a fast lap time. I have to say that my times are not that bad and the pace is good too. I expected to find a bigger difference with the times of the other guys. I'm happy with my performance! ”.

There were two members of your team who turned out to be false positives after taking the swabs, how did it go?

“One of the guys tested positive for the swab initially and in fact he was immediately quarantined in the hotel. Luckily, now he did the PCR test and it came back negative, then he did another one and is waiting for the results. I hope that from tomorrow he will be able to return to work with us ”.

Did you have the opportunity to speak with Pecco?

“During these days I talked to him, actually we chatted in general about the bike, the tyres… He didn’t really give me any advice. Today I was able to follow him for a lap before he went back into the pits. During that lap I noticed some things that helped me a lot, especially in the change of direction ”.

How did watching him help you?

"To see how he moves on the bike by moving from side to side. For example, if he is with his body on the left I saw how he moves with his lower back on the right side and when he brakes he can move the bike to the right. I am trying to do the same thing. With the setup I use it is not easy to replicate it, but following him helped me a lot ”.

You were on the track a lot towards the end of the session and this gives the impression that you are comfortable on the bike, also because you said that tomorrow you will try and do a race simulation. What about the time attack?

“Today I tried to do a time attack. I think on the third day of the test I will try a qualifying simulation. I will do it in fifteen minutes and I will change the tyres, I will try to do the best time possible. The sensations on the bike are good, I have to work better on the corners. Tomorrow in the race simulation we will collect a lot of important data ”.

So far, seeing you on the track it seems that everything is going well, is there an area in which you find yourself most in difficulty?

"There is no one thing in particular. If I had to say one it would be in the centre of the curve: in the final part, right in the middle of the curve, just before touching the gas. I have to try to control the speed at that moment. I will work on the setup to try and improve in this area. Pecco and Miller seem to have more cornering speed for now ”.

Have you worked on your critical points of the past few days?

“I worked on the position in the saddle, the mechanics are working on some details that we will try in the next few days or in the first Grand Prix. I need more support on the saddle in the middle of the corner because I find myself completely out with my butt and I no longer feel the saddle of the bike, as a result I can’t understand how the rear tyre works. I’m just missing that and then for the rest we are there. We changed the braking system and I found what I like. It tends to heat up a little more and the feeling with the lever will be different, tomorrow in the simulation I'll see how it goes after twenty laps. "

How are you physically?

“I thought worse but I'm fine, these two days helped me a lot to recover and I feel 100%. Now that I understand better how to ride the bike it's even easier ”.

Bastianini: "I take too long to get up to speed, I’ll have to talk to...