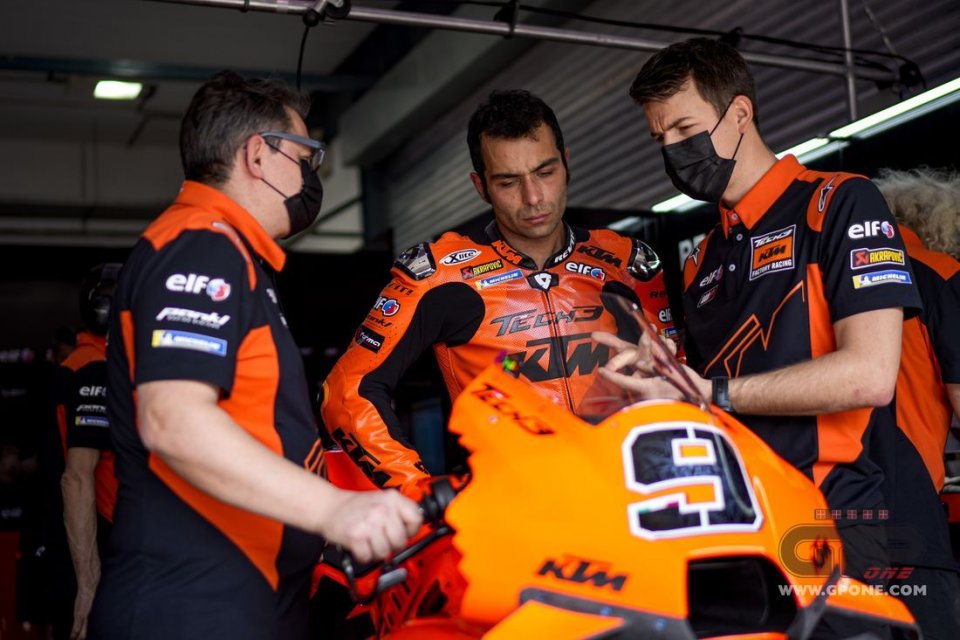 Danilo Petrucci's first contact with the KTM was not exactly painless and the name of the Italian rider from Terni at the end of the first two days of testing was at the bottom of the standings. It is not yet the time to be alarmed, because it takes time to adapt to a new bike and the next 3 days of testing, which will start tomorrow, will be essential to take further steps along the path to being competitive.

"We are only at the beginning and in this moment even one more day on the bike counts for a lot - underlined Danilo - I don't know the KTM yet and the team doesn't know me, but we have ideas for tomorrow. I still have to analyse all the data, but there are points on the track where I am close to the other riders and others where I lose a lot. For example, in the first corner I am in line, while in the 5th and 6th I’m losing three tenths and that’s a lot”.

“Last year it was the surprise of the championship, it made some big steps forward, but I still have to benefit from the strengths of this bike. It has great braking stability and a lot of traction, I'd be curious to try it when it’s really hot and on a track with worn asphalt, because in those conditions I was struggling a lot last year, I would be able to understand more. "

Losail is the opposite…

“It's a track where I've always been fast in the past, now I'm struggling more because I don't know how to ride the KTM yet”.

You compared Pedrosa to Muhammad Ali, can he help you?

“I have always had great esteem for Dani because he always managed to make a difference when conditions were difficult, like in Sepang or Jerez. He practically starts accelerating when I let go of the brakes, I've always wondered how he can ride a MotoGP bike with such a small body. Unfortunately we didn't have many opportunities to fight against each other, I only remember one battle with him in 2015 in the rain at Silverstone, when I made my first podium. Then, in the GPs where I was slow he was fast and vice versa, probably due to our different physique. I was very pleased that he came to my garage to ask me what I thought of the KTM ”.

What did he tell you?

“That this is not the best track for the KTM. In the end we have the same impressions about the bike, he and I are the only two riders who have also ridden for other makes, so we are the ones who can provide more information ”.

Will another 3 days of testing be enough to become competitive on the KTM?

"I can't say they are enough, above all I would have liked to try it on another track as well. Here in recent years I have always fought for the podium, but now the gap from the best is great but I know I can make it up. I was expecting a difficult debut, like when you are about to tackle a climb on a bike: it seems tough, but when you start pedalling it's even harder ”

“Seeing myself so far behind on one of my tracks doesn't make me happy, but with each exit I’m improving and we have some ideas. A big rider like me takes longer to adapt the bike to his weight. I think the KTM has incredible potential, the engine has a very smooth and linear delivery that can make a difference when we race in difficult conditions. "

Is it just a matter of keeping calm?

“I didn't set myself any goals for these tests. As I said, here in Qatar, in the past few years I had always done some incredible tests, I started for the race as the favourite and then I couldn't get on the podium: this year I would like to do the opposite (laughs). Keeping calm is not easy, in fact in the last few days I crashed because I was too impetuous, I was behind in the standings and I wanted to recover. Expectations are high, I want to do well and keep a positive attitude. The important thing is not the times, but finding good sensations on the bike".

You seem very serious and focused these days…

“When I'm back in the top 5 you will see me smile. I would like to do it especially on Sunday 28 March, the day of the first race ”.