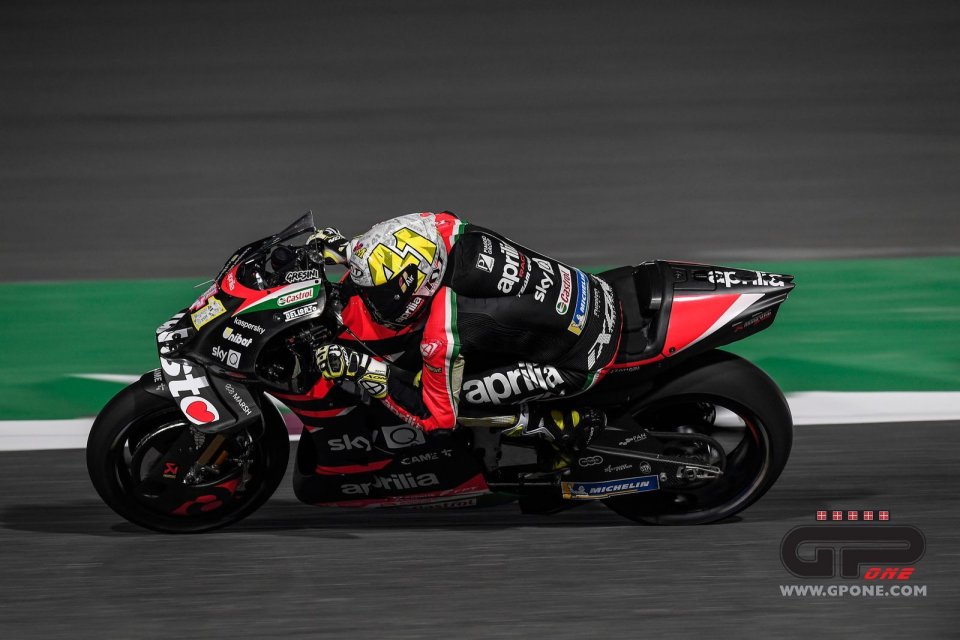 Aprilia’s 2021 MotoGP season got off to a good start. The new RS-GP, already promoted by Aleix and Lorenzo during the Jerez tests, also confirmed its development compared to the 2020 prototype on the Losail track. An evolution that has touched all the main aspects, from aerodynamics to electronics, to the further evolved V4 engine.

Even without focusing on the fastest lap, which still allowed Aleix to finish in third position after being the fastest yesterday, the speed of the new RS-GP was confirmed by several long-runs in which the Spanish rider maintained a promising pace.

“It’s obviously only a test, but our progress is equally evident. The great work which started last year and that continued during the winter has made the RS-GP improve according to my needs,” Aleix Espargarò said. “It’s not just one aspect but many small changes that make it different from the 2020 and more competitive. We deserve it, from the bottom of our hearts. We can fight it out with the best on the flying lap, and we’re in good shape as well. I don’t want to exaggerate, but I’m extremely happy, even if I want to keep my feet on the ground. In 2020, we were between a sixth and tenth place. Now, the story is different, even if we haven’t yet found an optimal balance. Here, in Losail, we were fast and did several laps in fifty-four. Of course, the race will be different.”

The 2021 RS-GP looks really different from the previous one, but is it really?
“Not really. The bike is not a revolution, but many small adjustments have been made that, put together, make a difference. The engine has more acceleration and torque below and a lot more downforce, thanks to the new aerodynamics. But, because of this, we lost some speed. Due to the new aerodynamics, the RS-GP has become very hard and tiring to ride, especially here in Losail where there are many fast corners. When I talk about riding fatigue, I’m not referring to weight. This is the lightest Aprilia ever. It’s the spoilers that make changes in direction tiring. I’d like it more agile and lighter.”

During the winter, Romano Albesiano worked a lot on weight and also on some innovations, such as the mass camper inside the saddle.
“I had already noticed this in the Jerez tests. The chattering disappeared and, here, with only four kilograms, there’s no vibration. The bike is very stable. In this sense, Yamaha is the reference, and we’re going in that direction. But I’ll have to work a little more in the gym. The bike has no problems. We’re competitive, but it’s not luck. Everyone worked a lot in Noale. There are new engineers. We’re closer. We didn’t only improve on the lap. And, I have to say, we pushed because many fell.”