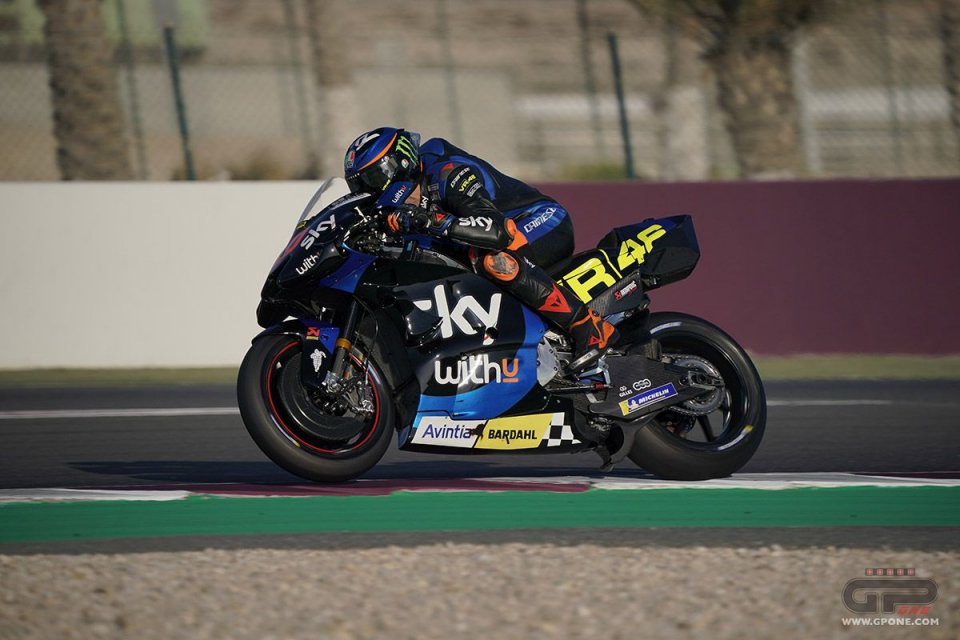 Ending the first three days on a MotoGP bike just over 1.5 seconds from the best in the standings can undoubtedly be called a great start. Luca Marini did exactly this, making an excellent start on the Ducati, and ending his first taste of the top class in 18th position, second best rookie behind Bastianini and ahead of Jorge Martin, both very close.

The icing on the cake was also represented by the fact that he finished the day in front of his brother Valentino Rossi, who instead finished his two days in 20th position.

Today Valentino was behind you, Bagnaia and Morbidelli. Maybe it’s the right time to shut down the Academy?

"Let's hope he doesn't close it! In my opinion, Valentino tested a lot of things today, I got the impression Yamaha brought him a lot of new material and I think they are important tests. The season starts soon, you only have three more days and then the test period is over. When you are a rookie like me you just have to think about riding, the bike is that and only today did we start to change something, the first little things. In these cases you only think about riding, dialling in and improving your pace. It’s easier to go fast in this way. "

Tell us about your day, how did it go?

"Today it was easier to ride the bike. The Ducati is awesome, we worked really well today. I still need to find the perfect position on the saddle to feel comfortable, but I already made some steps forward. I also improved a lot under braking, now from this point of view I am close to the best and it is very important because with our bike, braking hard is essential to go fast. I have to work on the data now to understand in which areas I can still improve. Then of course I have to also understand how to set up the bike, as well as change my style. In short, there is a lot of work to be done ".

Do you feel that you have made some steps forward compared to yesterday?

"Today I found a lot of differences in the saddle compared to yesterday, we worked very well on the electronics and I can control the bike much better. I prepare better for corner exit, as well as the braking, I feel the front better. I understood how to start the braking phase, while yesterday in some moments I found myself in difficulty in braking. In any case, today we really made some steps forward and I know what to ask Ducati to take more steps forward already in the next test ".

Did you follow other riders on the track to study someone and maybe understand where you are going wrong?

"Unfortunately I wasn't able to follow anyone today. Every time I entered the track I was on my own and I found myself riding like this, gaining more and more confidence and then looking at the data to see where I was wrong. I improved in every corner, except for two where I'm not comfortable yet. So even riding alone paid off from a certain point of view. Certainly following another Ducati rider would be easy, I think I'll ask some of the guys if we can do some laps together in the next few days. It is also important for the race, to understand when to brake. In MotoGP when you are in someone’s slipstream, you have to be careful because the one in front of you comes close to you very quickly. "

Looking at the speed chart, we can see that you are over 10 km/h slower than the best Ducati rider who is Zarco. Do you know what that depends on?

"Honestly, we haven't thought about it yet, because there is so much more work to do in that area which represents the last two tenths. For now I have to improve in other things. I also noticed this gap, I honestly don't know how to explain it. I don’t know if it depends on my position in the saddle, because I'm taller and bigger. I don't remember if Petrucci had this problem and he too was big. For sure the technicians will analyze this. I don't even know if we are using new engines or not, and neither did I ask. Top speed is one of those details you are going to look for at the end. Now I still have to improve my riding ".

All the rookies went strong. Moto2 prepared you well…

"The times were good. We rookies all did a great job in my opinion. Being just over a second and a half down after three days is not bad at all in MotoGP today. From a certain point of view, it also confirms that in Moto2 we are well prepared for MotoGP. There are a lot of similar things. I would like to be more satisfied with my comfort in the saddle, because there are still some problems from this point of view. But we are working on it and I hope to have something for the race to be in the best shape also in this area. I like the bike from all points of view, I don't see any big problems on the track. We need to make a small step forward, because I struggle in some parts of the track ".

Marini: "Just a few messages with Valentino, my mum gives me advice"