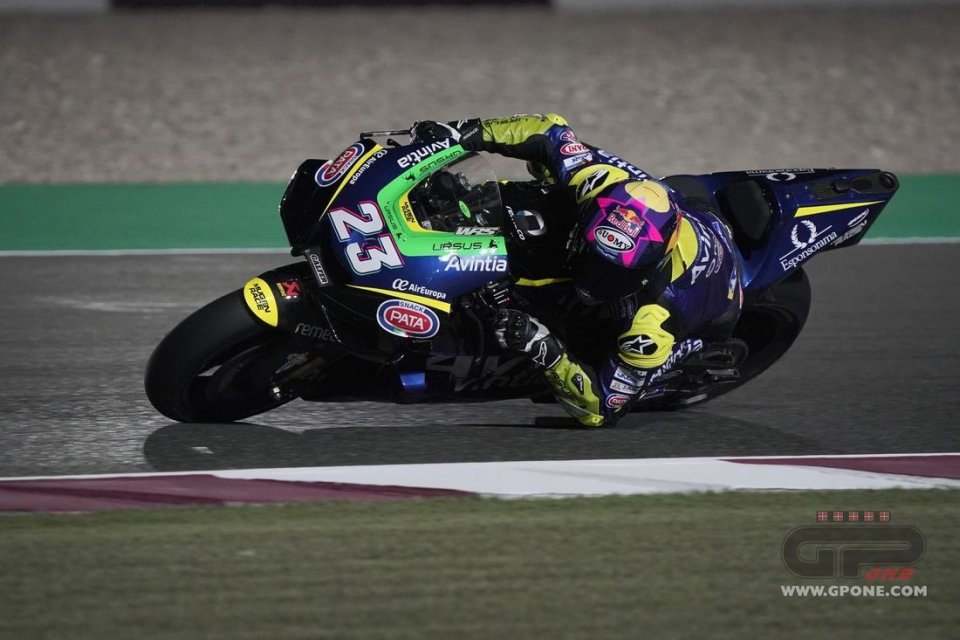 Enea Bastianini was the fastest rookie at the end of the three days of testing on the Losail track, in Qatar. The Moto2 world champion finished with the 16th quickest time, about 1.5 seconds behind the leader Fabio Quartararo. It’s a significant result, considering that these were the first three days in the saddle of a MotoGP bike, among other things not one of the easiest on the grid to interpret.

The Esponsorama Team rider managed to gradually improve his benchmark times, lap after lap building that vital harmony to be able to go fast on an over 260 hp beast which is the Ducati GP. He didn't push too hard today and managed to put together 45 laps without making any mistakes, and was able to provide an accurate summary of this first taste of MotoGP at the end of the day.

"A good result, I am satisfied with my tests - said Enea - we worked very well and I began to understand my bike which is not easy, the level is very high and so we will have to continue working like this. Compared to the first two days I feel I have made a good step forward. It was important to gain more and more confidence and that is how it went, so it was more than positive for the first time ".

You have started to get to know the Ducati GP bike, is it easier or harder than you expected?

"Better than I expected. I did not expect all this power and especially the speed in gear changes. It really makes you feel good, then when you start pushing and you focus more on riding ... I'm not saying that in three days I have already got used to the speed, but already on the second day it was less traumatic. There is a lot of enthusiasm and the team works well, so it’s all OK. In the garage I have Pigiamino (Alberto Giribuola, Dovizioso’s former crew chief, ed) who is very good, I feel good with him. I feel we can do good things together, but now it's too early to talk about it. The best is yet to come. "

Which aspects impressed you the most about the bike?

"The things that struck me the most were acceleration and electronics. We only started working really on the electronics today, because until yesterday I was riding too stiff. Today I loosened up a lot from the second session, I started to ride better and we made some changes. There is a world to discover and I think I am if not at 10%, at the most 20%. But it is very important to be able to sort out the electronics well. I am learning to manage the gas well, which obviously is a different world than Moto2. Then even with the tyres there is work to be done, they change a lot compared to those of Moto2 ".

Did the Michelin technicians give you any particular information?

"They told me to be careful on the first lap, because if you don't get the tyres up to temperature, you risk making mistakes easily. When the Michelin gets up to temperature it's perfect, but first you have to warm it up properly."

You also found yourself using carbon discs for the first time. How did it go?

"The carbon brakes didn't surprise me that much, I thought there was a lot more difference, but in terms of modulation they are very similar to those I was used to, so it wasn't a drama".

You are the best among the rookies. Did you see the others, did you keep an eye on them?

"I saw the other rookies, every day I checked where they were in the standings to understand what I was missing or where I was in the lead. For better or worse we were on the same level. I am in front, but it is the first test and it doesn’t count very much. I think I went better than expected, I'm happy to have been the best and this is a great start for me and for the team. "

Have you already taken a look at the data of the other Ducati riders?

"Yes, I did it because my riding style is very different from that of Bagnaia and Miller for example. Today I tried to ride more like them and it went well, I learned to be smooth with the bike, which is the best thing to do when entering a corner. Even the throttle opening needs to be studied a lot, because if you open a little the rear starts to jump, if you open wide the slide is controlled ".

Ducati has always been famous for its difficulty in cornering. Did you encounter this?

"I think the Ducati turns well. Obviously we come from a bike that is very different from this one, so this is like a completely different planet to me. I immediately adapted to the level of braking, while I have to work a lot on exiting the corners. Pecco and Jack are far away from this point of view. "

Is the good climate you built in Jerez still there?

"We all get along well, it's good for everyone to play together as a team. It's convenient for everyone, even to the strongest. We are all good guys and we all cooperate. This Ducati thing is really nice and I didn't expect it. "

What are your goals for the next three-day test session here in Losail?

"Now I know the bike better, in those days I would like to be able to ride more relaxed to do more laps because, for better or worse, I have not yet been able to do more than 6 or 7 consecutive laps in these days. It is important because the race is long, it's more than twenty laps so it's something we will have to work on a lot. In the tests you do a lot of little exits, the situation is different and then I’m still riding a bit stiff. I will have to finish the race somehow! ".