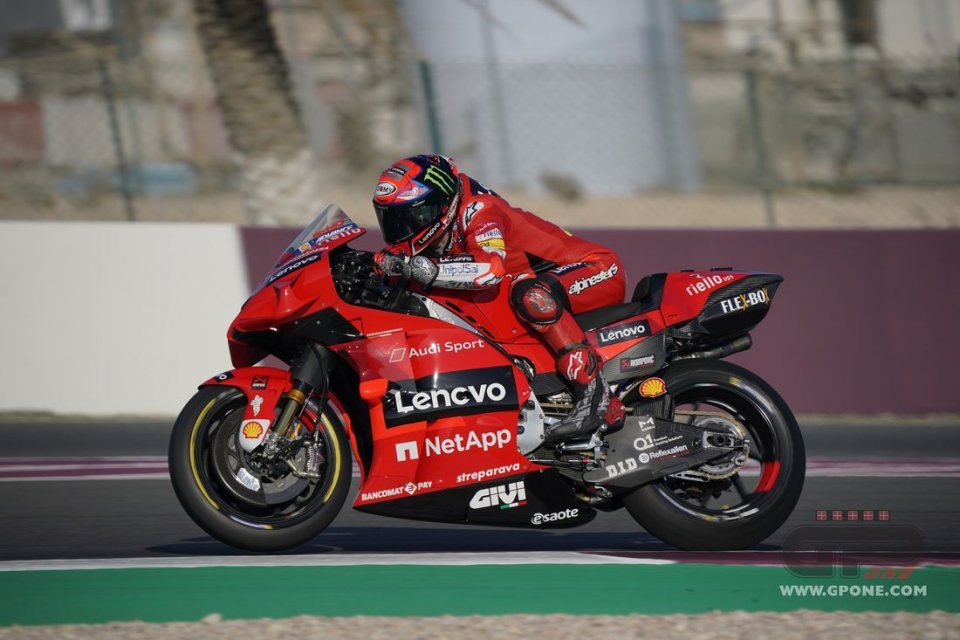 Ducati closed the first two days of testing in Qatar with Jack Miller’s 2nd time and Pecco Bagnaia’s 9th. All in all, it was a good start for the Italian constructor which, as always, worked hard in the winter and implemented some innovation, Gigi Dall’Igna’s trademark. We got to see the new fairing yesterday, and today the riders tried a new starting system that lowers the front of the bike as well as the rear. A new component that Honda is also experimenting with, as we can see in the video below.

Bagnaia explained: "Now the bike is completely lowered,” he laughed, “And this system makes a nice difference too. We’ve had lot of things to test, and that’s why I stopped in the pits often, because they were substantial tests and took time.”

The rider from Piedmont is happy with his debut in the official team.

“I didn’t have a great start yesterday. A fall isn’t the best way to start. I also felt a bit of pressure, maybe because it was the first day. But it went better today,”  he pointed out. “I concentrated on the tests, and it’s good now to have two days off to analyze all the data and plan the work for the next test. Qatar is a difficult track, which is why I’m happy to be in the top ten, even if doesn’t matter much these days.”

Miller was faster than he was, and the Australian rider can also be satisfied. Today he got to try the new aerodynamics for a while.

“I used it most of the time. I made comparisons with the old one,” he explained. “I’m quite happy because we don’t lose anything in maximum speed. There are no huge differences from the previous one, but maybe it gives a little more stability.”

Jack supports the work done in winter by the engineers in Bologna.

“They brought a lot of  innovation, and we haven’t finished testing it all yet,” he continued. “Luckily, we have another three days, and I’m satisfied with what they’ve done, considering the regulatory restrictions. I can’t wait to race.”

But, as for his opponents, it’s still too early to make a clear assessment of the numbers on the track.

“In Losail, we’re always close and, after five days of testing, we’ll be even closer,” he observe. “Did  the Aprilia surprise me? They seem to have done a good job, and Aleix has always been strong on this track, but then things can change in the race.”