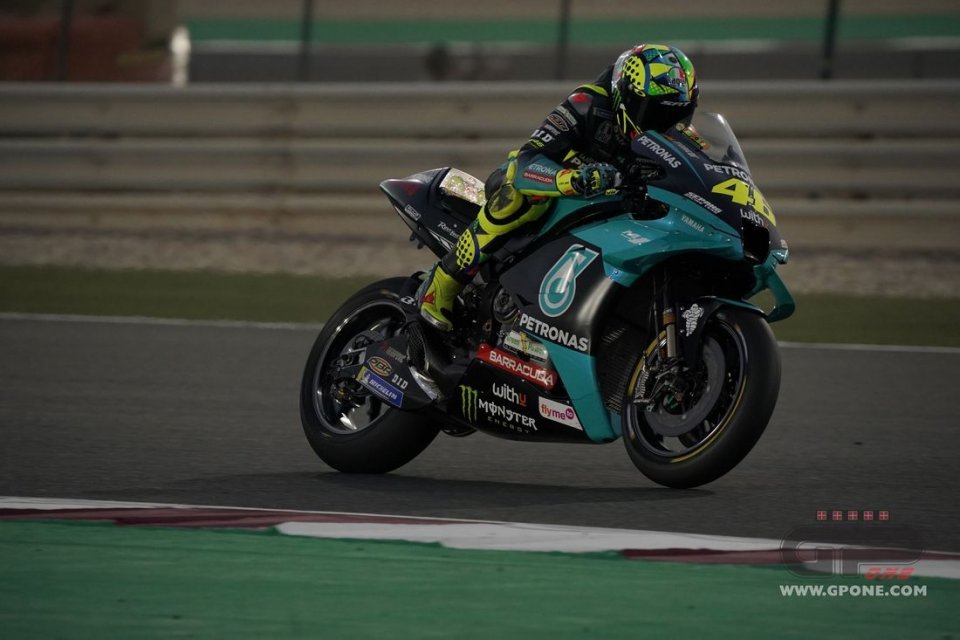 New things are often good, especially when a rider has a long career behind him. This is the case of Valentino Rossi, who today joined the Petronas team for the first time. Expectation was high to see him with the new colours and even a veteran like him felt a strange sensation.

“This morning I was excited and in the end I had a lot of fun - he confessed - In the end not much has changed, the bike is the same as before, and in the garage I found a good atmosphere to work well. As for the rest, the final result, 14th overall, wasn't great, but I managed to keep up a pretty good pace. As usual, there are a lot of different riders and bikes that go fast, you have to work, but the first impression was positive ”.

You have started your 26th season in the world championship…

“More than a career, it's a life! As I said I was excited because I have started a new adventure and this gave me a lot of strength and motivation. The first time out was a bit strange, but in the end I found the same old M1 again, only in a different outfit. I know it will be a tough match, with a lot of young riders and a very high level, it won't be easy but I will give my best. I’ve trained hard, my approach doesn't change ”.

“That’s because I don't take out my ear plugs and I don’t adjust the tone of my voice, I'll have to be more careful (laughs). Franco is the best teammate I could want, we train together and challenge each other almost every day with all types of bikes. Even today he went very fast and I'm happy to be with him because we have a special relationship, we are a good team. We hope to be both competitive ”.

You also left him the left side of the box…

“Yes, Wilco (Zeelenberg, ed.) came to talk to me and told me that I should take the right, because Franco was used to the left. For me there was no problem, if Franco is happy I am too, the side is not very important. "

Your brother Marini was also on the track, he says your mother gives you both a lot of advice. Is that true?

“She is very technical and she says interesting things. After all, she started forty years ago with Graziano, then I was there and then Luca, she has more experience than me (laughs). We like to ask her a few questions and then hearing her answers. Unfortunately, today I was unable to see Luca on the track, it is not easy to organize a few laps together, but I would like to do it before the end of these tests ”.

You were faster than Quartararo today, is that important?

“In these long days of testing there are so many variables to take into consideration, it depends on when you put on the new tyre, on how you use it. Honestly, I don't really watch what the other Yamaha riders are doing, I prefer to focus on myself to give my best ”.

How have they worked in Yamaha on the new bike?

“Last year's M1 solved some problems, but it deteriorated in other aspects. Franco was very fast in the second half of the year, while the riders with the factory bike had more problems. Yamaha has worked hard over the winter, we have a lot of things to try and we will do it in the next few days, I hope they are good. "

Have you already tried the new frame?

“Only for 6 or 7 laps, because today we preferred to concentrate on the standard bike. I must say that the first impression was not bad, but I will have clearer ideas in the coming days. There will also be other interesting things to try. The main problem is that we have five days of testing on the same track and Losail is not the best place to judge a chassis, because it is fast and has no slow corners, like Valencia or Jerez”.

How is the work in the garage going?

“I miss my Australian mechanics, but I have found a lot of passion and desire, they work well and a lot. There are so many things to sort out, for example I still have to figure out who has the best hand to put the stickers on the bike (laughs) ”.