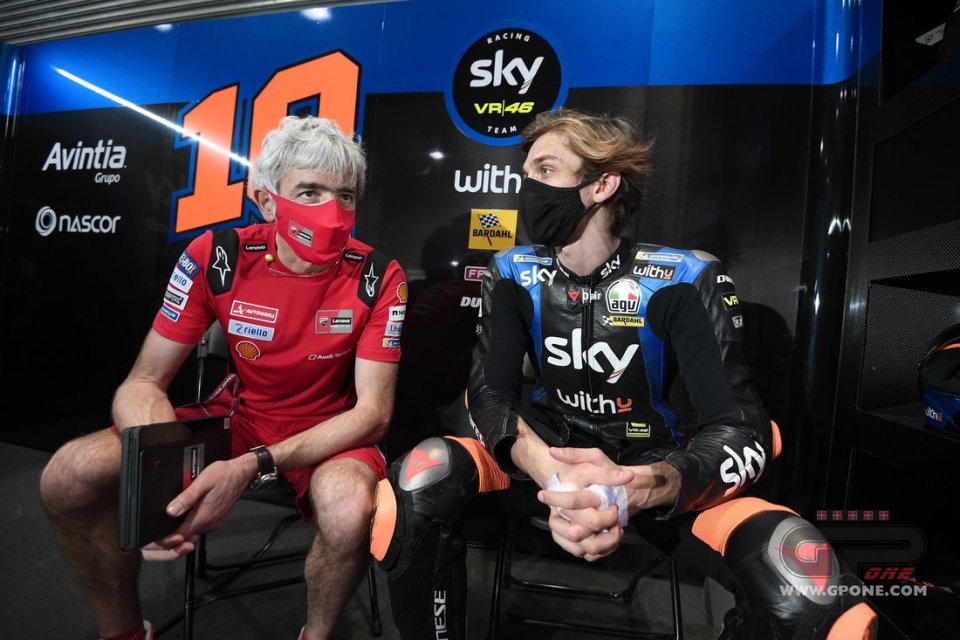 Things don't always go the way one imagines, or rather dreams. Luca Marini had long been waiting for the moment to get on the Ducati MotoGP, but when he left the pits and set off on the track, the Desmosedici did not give him the sensations he expected.

“When I got back, everyone asked me what my first impressions were and I told them it was all normal, I didn’t have any shocks. They were amazed! - he said with a smile- but then we found out that the bike had a problem, it wasn’t giving all the power ”.

So the Ducati technicians did their job to bring everything back to normal, because even on the second Desmosedici not everything was going well.

"I must say that it was nice to hear their support, to see so many men in red in my garage – continued Luca - They worked to fix the bikes, unfortunately the day was a bit complicated, I lost a lot of time at the beginning, but in the end everything went well and I managed to do some good laps ”.

In other words, Marini discovered what it really means to ride a MotoGP bike…

"I had some good sensations, I expected a lot worse, although of course I haven't taken it to the limit yet - he said - The thing that impressed me most is the braking. Carbon discs are different from anything I was used to, the feel of the lever is very different and I don't brake in the right way, I have to work on this. Another thing is the electronics, it is scary for how they work. Practically the more you open the throttle the better they work, you have to trust it because the feeling is that the more you open the throttle the more stable the bike is. We are not used to that in Moto2, we control the throttle, I think it is for this reason that Martin crashed, he was in a strange position, virtually upright”.

Luca has clear ideas on what to work on in the next few days and his seat position is one of the key points for him at the moment.

"The position on the Desmosedici is very particular, similar only to that on the Panigale V4 - he observed - I had already been in Ducati to do some tests and in fact today I had some material for myself, such as several handlebars and foot-pegs and a tank that Lorenzo and Pecco also use. Tomorrow we will do other tests because I still don't feel it mine, in the middle of the curve I can't keep a natural position. I would also like a different saddle, if they can give it to me well, otherwise it won't be a big problem, I'll adapt ”.

The rider of the Sky VR46 Avintia team is very analytical and must also thank his colleagues from the Academy.

"During the winter I talked a lot with Bagnaia, who knows this bike well, but also with Morbidelli - he reveals - They gave me some useful advice, I arrived prepared for what I had to do for my first time on the MotoGP bike and it went well".

Tomorrow he will be back on track and hopes to find two of his mechanics in the garage, who today remained at the hotel after being found positive for Covid.

“I'm very sorry about that, because I wanted them with me after working together in Moto2 and this would have been a special day for them too. We know each other well, they live near me, and I am taking many precautions. I think it must be a false positive" was Luca’s wish.