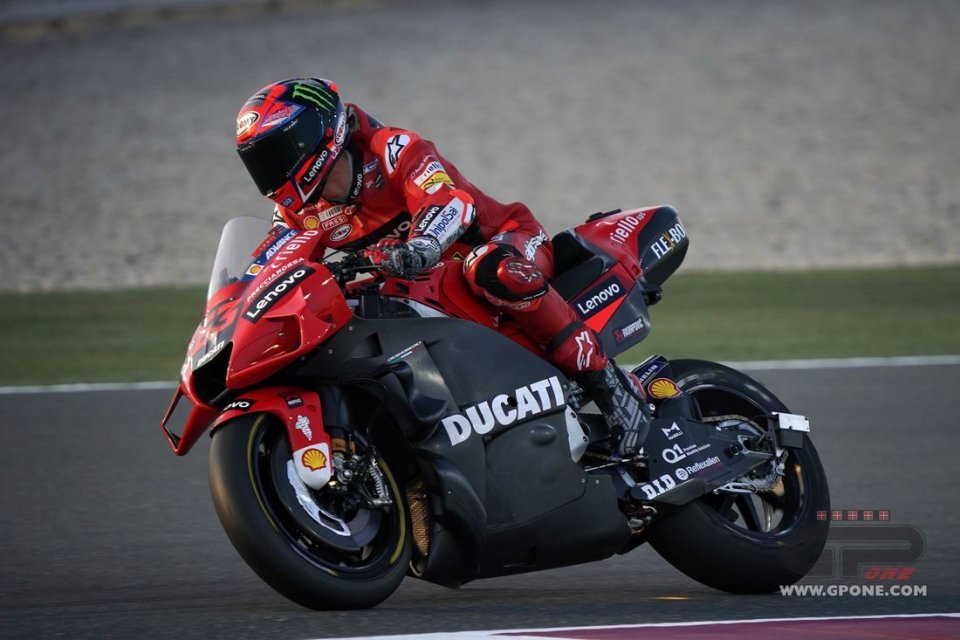 They say that the you never forget the first time and the first time in red for Bagnaia and Miller was special for both of them. The two riders who were under the Pramac roof last year have now moved lock, stock and barrel to the factory Ducati garage. "I couldn't wait to see myself riding with those colours" smiled Pecco at the end of the first day and even Miller seemed more responsible with the factory shirt on.

For both men, the first day of testing in Qatar was useful above all to regain pace and confidence with a MotoGP bike, even if the track conditions were not the best due to the wind. Gigi Dall’Igna, however, still brought them something to test: a new fairing, on which the Borgo Panigale technicians worked mainly on the lower part. The first impression was positive.

“I liked it - Pecco declared - It has its pros and cons, but the former beat the latter, especially on a track like this. Unfortunately I broke it in a small crash and they are trying to repair it. I crashed like an idiot, if I may say so, I had a hard tyre on the front, the sun was going down, the temperatures had dropped and I went down on the ground ".

Jack also liked the new fairing: “With this wind it was not the ideal day to do aerodynamics tests, so we will have to do more tests and analyse the data, but I didn't find anything negative”, was his comment.

For both of them this will be a fundamental year and they will have to get used to working in the factory team.

"There are a lot of people who listen to you when you stop in the garage, even if today it was difficult to talk to each other with all that wind - said Bagnaia - Today was a rather complicated day, because it is not easy to get back on the saddle after three months off. It's hard to say anything more, but when I tried to push I felt good, especially in the braking and corner entry phases. After all, the bike hasn't changed much from last year due to the regulations, but from tomorrow we will start working more for the future ”.

Even Miller, who usually solves everything with a joke, felt the excitement of entering the red box for the first time...

"When I sat down I was a bit nervous, almost embarrassed - he confessed - There are a lot of people, all very professional, and today was useful to get used to the new team and to the bike again. I would say I can sleep peacefully tonight, it was a positive test. I didn't go looking for the time, it didn't make sense with all that wind, but I focussed above all on the pace ”.

Jack and Pecco will continue their work tomorrow, but before leaving the Italian also commented on the first day of the rookies on the Ducati: "I saw Bastianini for two corners, then he let me pass and I crashed, so I don't think I helped him a lot - he joked - They all seem to be stoked, both him, Martin and Marini. Luca is getting used to a complicated bike, but the level of all three is very high ”.