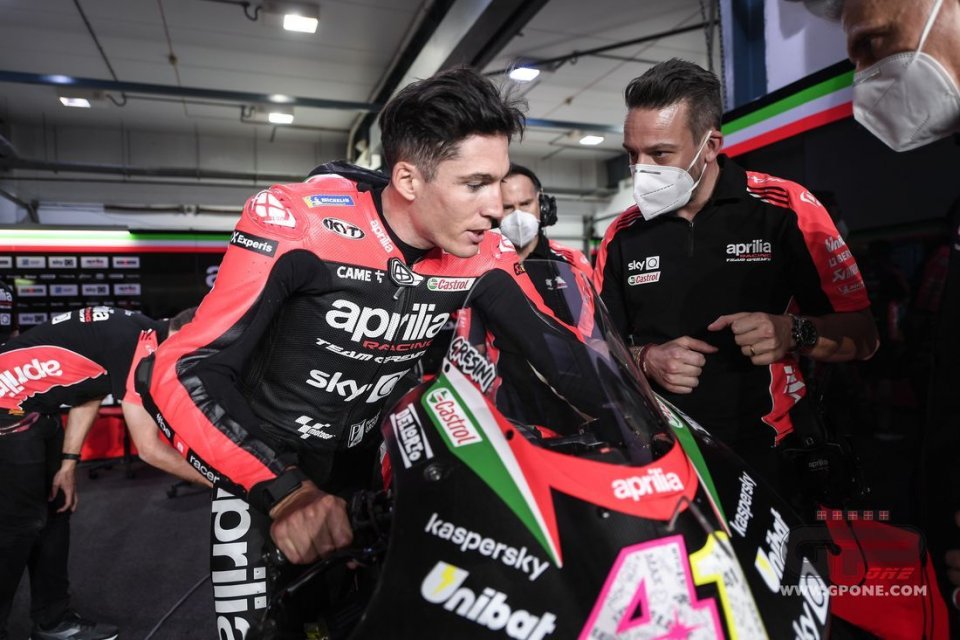 As they say 'a good beginning bodes well', or even 'well begun is half done'. Of course these are only the winter tests, yet Aprilia, more specifically Aleix Espargarò, looked pretty good in the first direct confrontation with their rivals. At the end of Day 2 under the spotlights of the Losail track, the rider-bike pairing (somewhat surprisingly ..) were on top of everyone else in the timesheets with a benchmark time of 1'54"687. The performance underlines the excellent work done by the Noale manufacturer during the winter. "I want to dedicate this beginning to Fausto who is no longer with us - said the Spaniard - he would be proud, on this track he started the project with Aprilia and will be happy seeing from up there that now the bike is fast ".

"The bike hasn't changed much from last year, however, especially in terms of stability we have made significant steps forward - he specified – The same can be said for the aerodynamics, now we have more downforce and acceleration out of the corners. We still have to find the right balance, however, it is certainly a great starting point. Even though it was only the first day, the time came easily. "

Much of today's work focused on aerodynamics. The 31-year-old had the opportunity to try out two different packages, already used in the previous Jerez test.

"In Spain we had some interesting tests. Now, albeit on a track with different characteristics, the schedule is almost identical. Today I tested two bikes with slightly different settings, in the next few days we will also focus on the pace".

At the same time, the RS-GP did not appear to be extremely competitive on the straight, either with the Spaniard or with Lorenzo Savadori. According to the official data, Aleix Espargarò achieved a top speed of about 15 km/h lower than Jack Miller's Ducati.

"The engine is the same but, compared to some time ago, the aerodynamics play a fundamental role - he pointed out - The matter is complicated and undoubtedly it is something that we will have to fill. In any case, I am satisfied because we were able to have a good acceleration that compensated for this deficit ".

As he waits for the season to start, the man from Granollers hoped that today's performance will not become a single exploit similar to the tests of past years, but something more consistent...

"I am happy with the time set this evening, I also completed a 10-lap race simulation. In 2020 we did well in Sepang, but here in Losail we found ourselves at the back. We have to be satisfied, despite this being the opening day. If we continue on the path we have taken, I think we will reach the goals we set for ourselves".