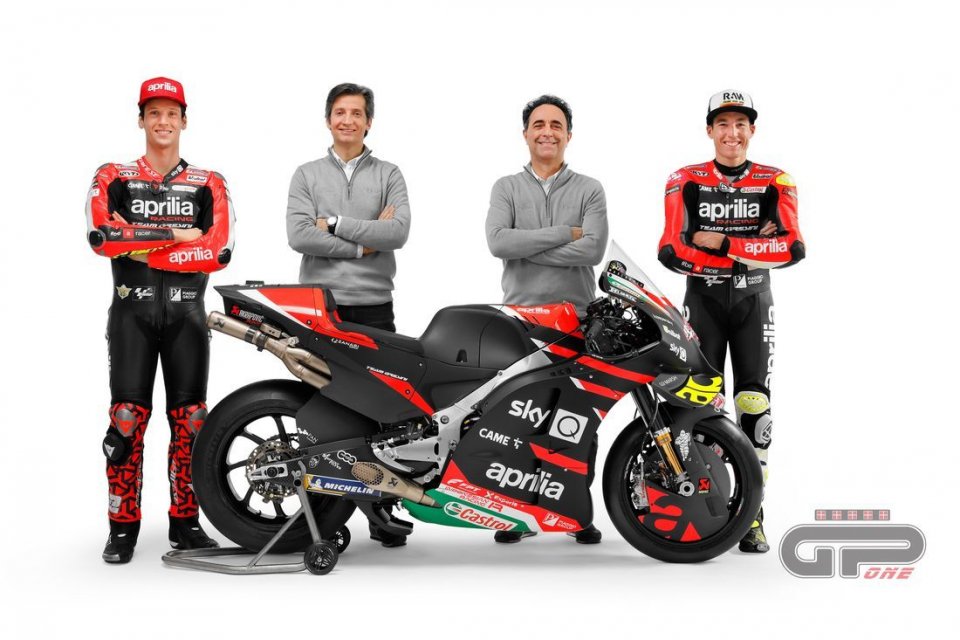 "This is my third year in Aprilia and it is the most important one". Massimo Rivola, the CEO for racing, has no doubts, the Noale manufacturer must make a leap of quality in 2021 and then carefully plan its future. However, with the season about to start, there are still a lot of questions to be answered. Today the new RS-GP was unveiled and Lorenzo Savadori was confirmed as a rider alongside Aleix Espargarò.

Massimo, you said you would wait for the tests before choosing between him and Smith.

“It's true, but we decided to bring forward the decision and it was a company choice, because it also influenced other aspects. We thought Bradley had the right experience and the best characteristics to be the test rider. "

So will Smith continue to be an Aprilia tester?

“We don't have a name yet. We think Bradley did a good job in the past and we would like to continue with him, but he’s not sure. He is not happy because he would like to race, I understand that and he could do some wild cards ”.

Wouldn't it be useful to have an experienced tester?

“Yes, especially at this moment when we are trying to make up the gap with the best”.

Iannone would be perfect…

“Unfortunately he can’t, the disqualification also applies to the tests. I don’t want to comment, but if you think that now those who are cocaine-positive only have a one-month stop… ".

What do you expect from Savadori?

“I am aware that a rider who had come from Moto2 would have had a better chance of doing well right away, but Lorenzo did three races with us last year and was promising. I expect him to grow over the course of the season, not that he will be able to get ahead of Espargarò but that he will get closer and closer. It is not right to talk about results, Aleix must be his benchmark and it will not be easy to beat him, we have seen how even a great talent like Iannone struggled. It takes time ”.

A lot of riders have said no to you, will a more aggressive strategy be needed on the market for 2022?

“Yes, but first we will have to figure out whether or not we will have a satellite team. Depending on the answer, we will decide which path to take ”.

When will you decide?

“Carmelo Ezpeleta has asked us to decide by May, it would also be useful for us to make a decision early in order to be able to get organized in the best possible way, also from a production point of view. Right now, after Fausto's passing, I prefer not to talk about it. Give us a month and we'll think about it, now we are focused on the present ”.

What did Gresini represent for you?

“Fausto was an intelligent person and a champion, like all riders he had something special. In addition, he also achieved a lot of success as a manager, he had an eye for the riders and Savadori is the proof of this ”.

Fausto's name was also on the bike unveiled today. What can you tell us about the new RS-GP, will it now be able to close the gap with your rivals?

"To do this you need a bit of everything, but I think we are not as far away as you think, as what we saw in 2020. From an aerodynamic point of view, we are among the best, as far as the Aprilia frame is concerned, it’s a story that speaks for itself, plus we have taken a step forward in electronics and still have leeway. The weak point is the engine, our guys did a great job, in one year we went from a 60° V to a 90° one, but it takes time ”.

“I prefer time. However, if the new bike is as fast as I think, we will show that you don't need a huge budget to be competitive ”.

How about a satellite team with VR46?

"It would be fantastic to bring Valentino Rossi's name back to that of Aprilia again, but before thinking about that we will have to show that our bike is competitive."