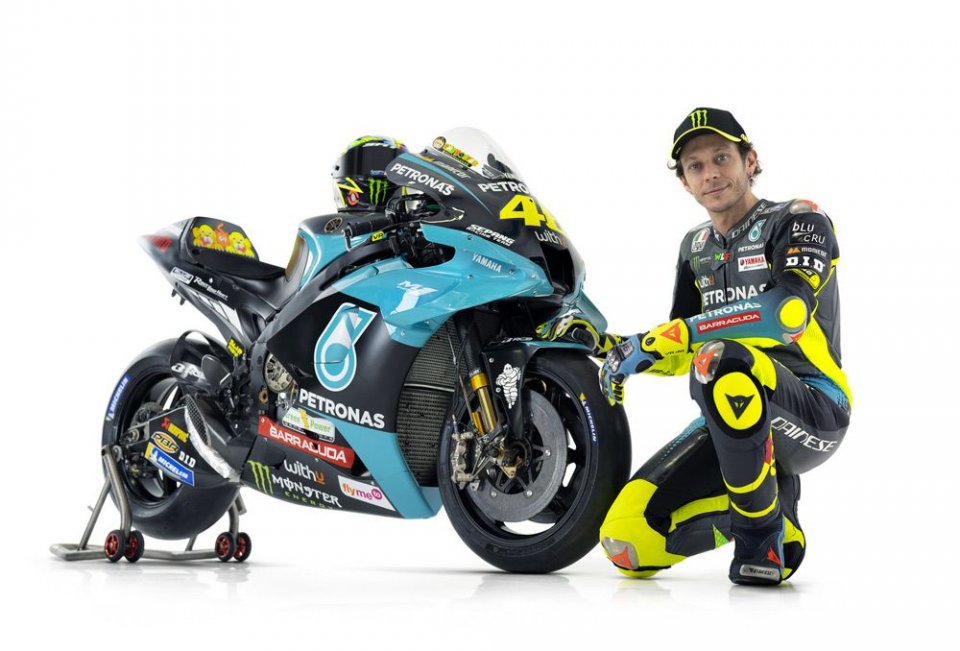 "The yellow with this blue is really good" smiles Valentino Rossi at his first public outing with the colours of the Petronas team. His 26th year in the world championship begins in a new team (but with the same bike, Yamaha) and the same desire as always to put himself to the test, in spite of his ‘advanced’ 42 years of age and the many doubts that always accompany a new chapter of life.

"I have been in official teams for a long time, since 2002, but in the first two years in 500 I was in a similar situation - he began - Of course, we are talking about another world, but I was very happy".

How do you start your 26th year in the World Championship?

“That is a lot, a whole life, but I don’t race just to spend time. This is a very important season for me, because I come from the last two seasons that are less than what I expected, especially in the results. I want to be stronger, I want to be more competitive than in the last two years, fighting for the podium, fighting to win races and trying to be competitive throughout all the season. I would be happy to finish in the top 5 in the championship ”.

Isn't a 10th title an obsession?

“All the riders on the grid think they can win the World Championship, the same goes for me, why not? It will certainly not be easy, because there are so many strong riders, we will need to understand many things, starting with how I will be on the bike and with the team. But it is not an obsession, I would be happy if I did a season as a protagonist, then everyone decides what it means".

Your fans still support you…

“I have a lot of them because I made them have fun and to do that you need to do some good races, some good battles, in short, be competitive. So the goal is for them to have fun, not me (laughs) ".

Doesn't age count on the track?

“Unfortunately, even on the track I remember how old I am (laughs). However, thanks to the Academy project, I have the opportunity to spend almost every day with a dozen of the World Championship riders and 3 of them race in MotoGP. When I talk with them I can see what the first physical performances are, we challenge each other 2 or 3 times a week with different bikes, sometimes I am the fastest and other times there is someone who beats me, but I am always there. Let's say I want to demonstrate that you can be strong even when you grow up (laughs) ”.

This year you will be up against Morbidelli, Bagnaia and your brother Luca. Will you be more of a rider or a mentor to them?

"I admit that this Academy thing has got a little bit out of hand (laughs). I never thought about racing in MotoGP against Franco, Pecco and Luca, but we did a good job and it happened."

"My friendship with Morbidelli, Bagnaia and Marini is strong, we won't ruin it on the track"

Will friendships be ruined?

“I'm not worried, to race against a friend without ruining the relationship you need a strong bond and we have it. I challenge them almost every day and now I will do it in MotoGP, it's an exciting thing. I expect them to be fast ".

Morbidelli said yesterday that friendship is more important than racing.

""I agree with Franco. I’m happy with what he said. I’ve been very good friends with Franco for a long time.  We worked together to bring him in MotoGP. I’m very happy to be his team-mate. So it will be not easy, but I think we can do. And I hope we can be both be competitive to try and win races."

What makes you continue racing? Do you want to prove to Yamaha that they were wrong in not choosing you for the factory team?

“No, not that, but I have many other reasons: I race to win, to put Franco, Pecco and Luca behind me, to be fast, to score a lot of points. There are many stimuli ".

"I'm not worried about retiring, but the results will decide"

Will it be your last season?

“As always, the results will make the difference, it will all depend on them and I like it that way. I will decide during the summer break, so in the middle of the season, I want to make half a season. My decision is from the result. If I’m strong and if I can fight for the podium, I can fight for the victory, I can continue for another year. It’s not an easy decision, but for sure everything depends on the results. But this is my idea. I don’t speak with the team, I don’t speak with Yamaha. Maybe they say to me I don’t have a decision! It’s possible.”

How do you imagine yourself once you leave MotoGP?

“It will change a lot my life, but I am not very worried. I know I’ve had a long, long career and I’m happy. Of course, after 26 years of this life it will be different, but I want to keep racing in cars”.

Ferrari has said it will prepare a hypercar to race the 24 Hours of Le Mans in 2023, are you a candidate?

“It would be great, my idea is to do that kind of endurance races, driving a Ferrari at Le Mans would be a dream. But I'll have to understand what my level will be, there are tough drivers in that category. I'm pretty fast, but I don't know if I am that fast. I'll try".

"In Petronas I will be able to concentrate on the races, Crutchlow will help us with development"

Let's go back to MotoGP, what do you expect from this season with the Petronas team?

“From what I can understand, there will be fewer people working on the bike, it will be a different method. Development will no longer be a priority, so I will be able to focus more on results over the weekend and I think that's good for me. I am happy with my situation, because I will have full support from Yamaha and the Petronas team has already shown that they can win races, I expect a high level structure and for my part I am open to everything. We will just have to figure out the best way to work together ”.

You will have an official bike, unlike Morbidelli…

"Yamaha made the decision and it will also be important to have a 2019 M1 on the track to see if we can improve the 2020. The work in the team will be a bit more difficult with two different bikes, but basically the difference is not that great."

Crutchlow is the new tester, what do you think about that?

“I expect him to help us a lot, because he raced until last year and he did it with Honda, so his input will be important. I also have a good relationship with Cal and I am happy to work with him, I will talk to him as soon as he has tried the M1. The important thing will be his motivations, because being a test rider is not easy, you have to find the incentives to push the bike to the limit without racing. I hope he comes with a good approach ”.

There will be no Marquez in the tests, will he still be a favourite for the title?

"We will have to find out when he comes back, from what I understand it will take some more time. But I think that when he does he will be as strong as before and, if he only misses a few races, he could still fight for the championship. Making a list of favourites is difficult, I see at least a dozen riders, either you risk forgetting someone or you say the whole line-up. That's the great thing about MotoGP, there are many bikes and many different riders who can win ”.