On the occasion of the presentation of the new MV Augusta F2 of the Forward Racing team, held in Courmayeur, Brian Gillen, the director of research and development at MV Agusta, expressed his views on the path of the team over the years, but not only that. In a year influenced by the health emergency, caused by Covid-19, which has brought about a freeze on technical development in the World Championship, Gillen revealed how a team can take advantage of this situation in order to prepare for the new season.

“So, this is the third year we have been involved in this adventure. We can say that this is the third year on the track because we started exactly four years ago: when the new Moto2 regulations were consolidated with the passage of the engine from Honda to Triumph. We started immediately with this new project. In all honesty, at the beginning we expected to do this activity by working with external companies because we weren't in the world of Moto2, we didn't know it well, unlike the Supersport that gave birth to MV's racing department in 2014. We had some good results in Supersport, so we decided to analyse the times compared to those of Moto2 and we realized that with a few more horsepower we could have done it in Moto2 as well. We were lacking knowledge of the tyres, of the environment. "

"In all honesty, we are much better than we could ever have imagined. We arrived with a lot of humility and expected the others to be better than us, then we realized the opposite, especially in terms of precision, assembly and pieces, but also in the work we do on the track. We pay close attention to every mechanical processing, every single weld, every spoke, we have had this care since the first prototype. When we took to the track for the first time in the Misano tests we immediately realized that we were not at the point where we expected to be despite working with important external companies. We started all over again in making the project very clearly, in its entirety: not even a washer remained, we did everything from scratch . We started by trying to get to know the bike because we didn't have the opportunity to do many tests away from the track. Our tests were the ones we did on race weekends, we got to know the bike this way. The same goes for the technicians and for Giovanni (Cuzari, ed.) or Milena (Koerner, ed.) ".

As for last season, what is your opinion?

"In Valencia, in 2019, we had an excellent result with Stefano Manzi, we finished fourth, so at that point we were ready to take a further step forward with the bike and we found ourselves in the middle of the pandemic, due to which there was a total freeze on the project. From that moment on we focused on all those details where we could still intervene, despite development being halted by the regulations, and on the one hand I can say that it did us good! This situation gave us the opportunity to focus again on all those details that are fundamental in a category in which in a second you go from being first to twentieth. Over time we managed to reach the top ten in the race and we realized that we were not far away, it is the details that make the difference and some of these were getting away from us, such as the electronics management to get the best out of the engine's performance. It reaches its maximum in a very narrow range of temperatures and at the beginning we weren't very focused on this aspect. The pandemic, and the technical stop, forced us to focus on these details and it was fundamental ”.

Can we say that this is a project that is now reaching its maturity?

"Yes, it is having an evolution. We are talking about maturity both of the bike and of the whole team that works around the bike. Working with the technicians of the Forward team is giving us considerable satisfaction also thanks to our core of CRC knowledge, the bike was built 100% by us: the frame is ours, everything you see is made by us and in this way we know the entire DNA of the F2 ”.

What results do you think can be achieved in 2021?

“We can't just talk about the bike. The races are based on three elements: the bike, the rider and the technicians. If one of these three is at the top and the other two are at a lower level, you will never get the results. Unless you happen to have between your hands a Casey Stoner or a Marc Marquez, who are champions and ride over any problem. However, such a rider creates other types of inconvenience because he ends up no longer recognizing what the bike's problems are. In this sense, the right thing would be to find a balance between the levels of the bike, the rider and the team, especially in a category as competitive as Moto2. Every weekend you have to find the right balance if you really want to be fighting for the championship, you have to work in this sense race by race, otherwise you score a podium but the race after you are twelfth and you cannot aspire to win the championship, there must be continuity. " 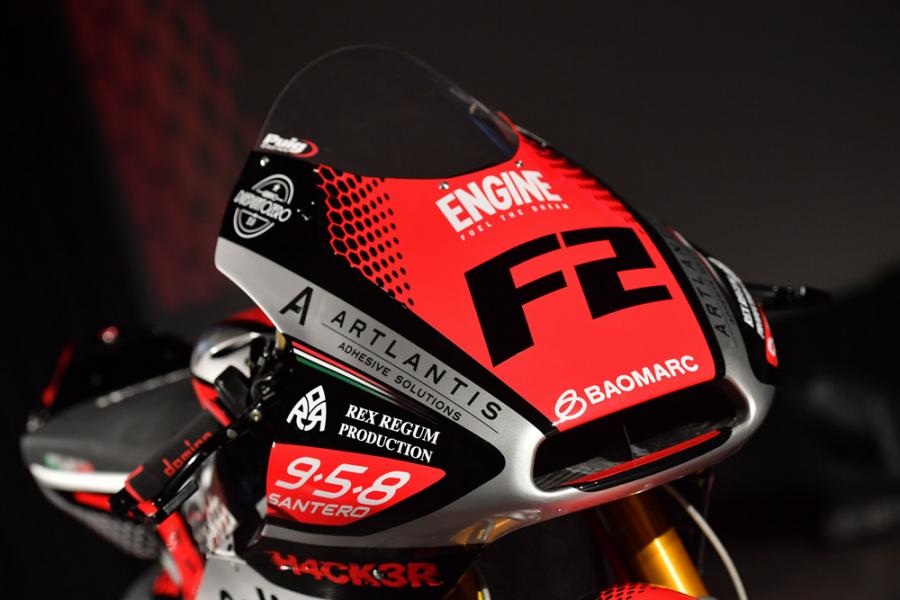 The new F3 road bike will be presented shortly, how much of the current F2 will be on that bike?

“I can't say anything, you have to read between the lines. I can say that the F2 that races in the World Championship has the same horsepower as our homologated bikes that run on the street with catalysed exhausts that must respect the noise levels imposed by law. The F3 800, which will be presented in a few weeks, is a very advanced project. It will have technical solutions that you don't find on the Moto2, it will have an inertial platform and traction control, it will have anti-wheeling. We are trying to make a bike that everyone can ride. It is much more difficult than a racing bike that you have to adapt to a limited number of tracks and is ridden by a racer. We can say that we have reached a point where road bikes are technologically ahead of those that race in the World Championship. With this technology, to crash you have to do something really incredible. On the contrary, in a championship like Moto2 I share the logic of making the riders grow and not the technology to try and get to MotoGP with the most skilful of riders. "

As a technician, wouldn't you like to put yourself to the test in another category?

"Of course. When it comes to fun, it would be great to be in a no-rules category. From a technical point of view, when there are regulations you have to be able to interpret them and at that point you find that not everything is black or white, but that there is always a technical interpretation of what has been written. It doesn’t mean that there are no challenges, they are just much finer and you have to try to understand how you can use the words in your favour to bring a technical advantage to the team. "

You are working for 2023 on a model with an innovative engine, what can you tell me about it?

“We have so many projects. There is an Adventure that will arrive shortly in two different displacements: a medium displacement and a 950, we are developing a completely new engine, a three-cylinder, which has nothing to do with the current one. "

"A thousand is a project that is always in our hearts, all our designers, planners, engineers dream of making a new F4 but it is the market segment that has the least market. At a time when it is very important to invest and grow as a company, we must be sure that from any sum we invest then we will have a gain for our growth, that type of bike would not allow it. You can start thinking about it when you have the rest of the range in balance. It is difficult even in terms of racing, if you want to be competitive in SBK, as we were in Supersport, you have to arrive immediately with a very advanced bike. Twenty years ago you could transform any bike into a World Superbike bike, today the regulation is so stringent that you must already have a technically advanced bike and you cannot develop it in progress. Think of Ducati, it did an exceptional job with the Panigale V4 but it did not win the world championship anyway. In many years with the Panigale V2, which as a technician I can say is one of the most beautiful bikes ever, however they did not manage to win the title. So even investing millions does not give you the security, because the following year someone releases something new and yours from the previous year no longer exists. At the right time we will build the new F4 ”.