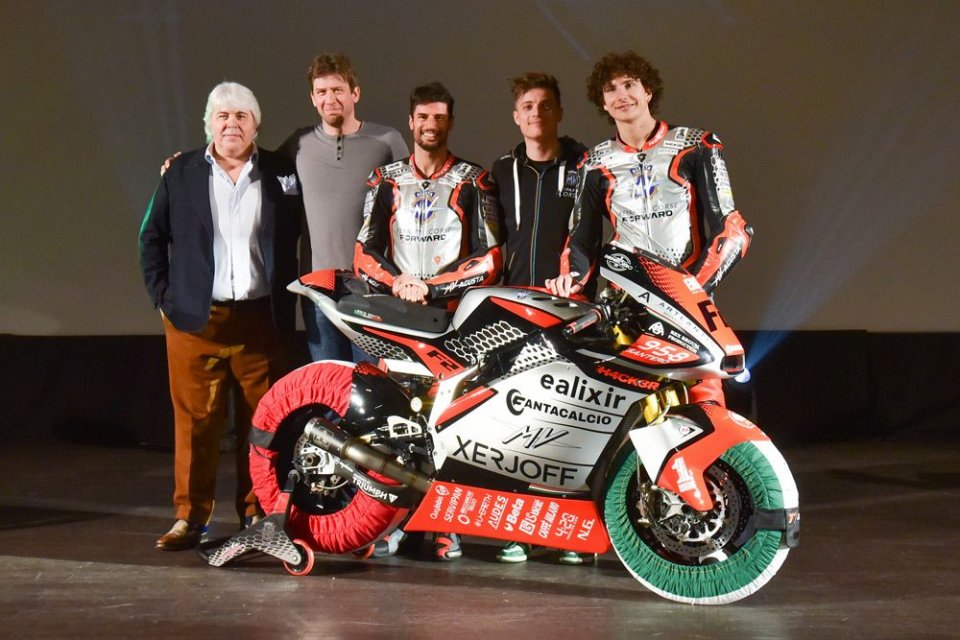 The history of MV Agusta is a long one and full of success, but also of dark moments which, however, now seem to be definitively behind one of the most famous motorcycle brands in the world. Now at the helm of the Italian brand is the Russian Timur Sardarov, who took over the company in 2019 from the Castiglioni family, who had relaunched it in the 1990s.

Timur has a past as a rider (in cars) and clear ideas about the future of MV, which is focused on its road products but also engaged in racing in Moto2, together with the Forward team. The MV president is looking at the new F2s on the stage, just after the presentation of the team.

“Colours are not very important in racing (laughs). The important things are the team's approach and the package created by the engineers, managers and the ability of each person, including the riders. "

Are you satisfied with the first two years in Moto2?

“In general in any sport, and I know it because I was racing in the Blancpain Series in cars, it takes time for the team to gain experience and to make their package competitive, miracles do not exist. Especially in a championship where everyone races with the same engine, it is difficult to fine-tune each part to stay in the Top 10, which is the first goal. Each year the Forward team has made progress and I think we will do better this season. We have two strong riders and a fast bike and we hope to get on the podium ”.

So the first podium in Moto2 is the goal?

“Yes and then we will go on from there. When we manage to get onto it, everything will change, people will become more motivated, even in the company. The hardest thing is to get onto the podium from scratch, when you do it everything becomes easier ”.

How important is racing for MV Agusta?

“In these times, racing is a technological showcase and a stage where you can demonstrate your competitiveness, we produce high-performance motorcycles and racing is important for our customers. My personal opinion is that it shouldn't be like that, because sport is only one part where the company has to focus, the other is to make their bikes easier to ride, with better technology, better services and better quality, and I'm not sure if any of this is related to racing. They are important, but they are only a part of our company, of what we have to do ”.

Would you like to see the MV Agusta brand in other classes?

“For Moto3 we don't have the bike, MotoGP is a path to take. Our company must first learn in Moto2 and then slowly move to MotoGP later in this decade ”.

Is Moto2 useful for doing developments that can then be introduced on production bikes?

“Not much, in fact the F2 derives from the F3, from our production bike, which is one of the best in its category. We took its philosophy, its measurements, and created the Moto2, so we went the opposite way from usual ”.

"We have done a restyling, it will be presented within a month and will be updated to Euro 5".

Is there any other news in the pipeline?

"We are working on a new 950cc 3-cylinder engine which I think will debut on the market probably at the end of 2022. This new engine will be launched with the new Dragster and Brutale, then it will be used on the F3 and Superveloce".

Can you tell us some more?

"We are working on two completely new bikes, they will be the Adventures, the first with a displacement between 500 and 600 cc and the second will have the 950 engine, they will arrive in mid-2023. We are also working on another new engine, it will be unusual, with an architecture that no one else has and will be dedicated to sports bikes. I'm not saying any more, we have a lot to do ”.