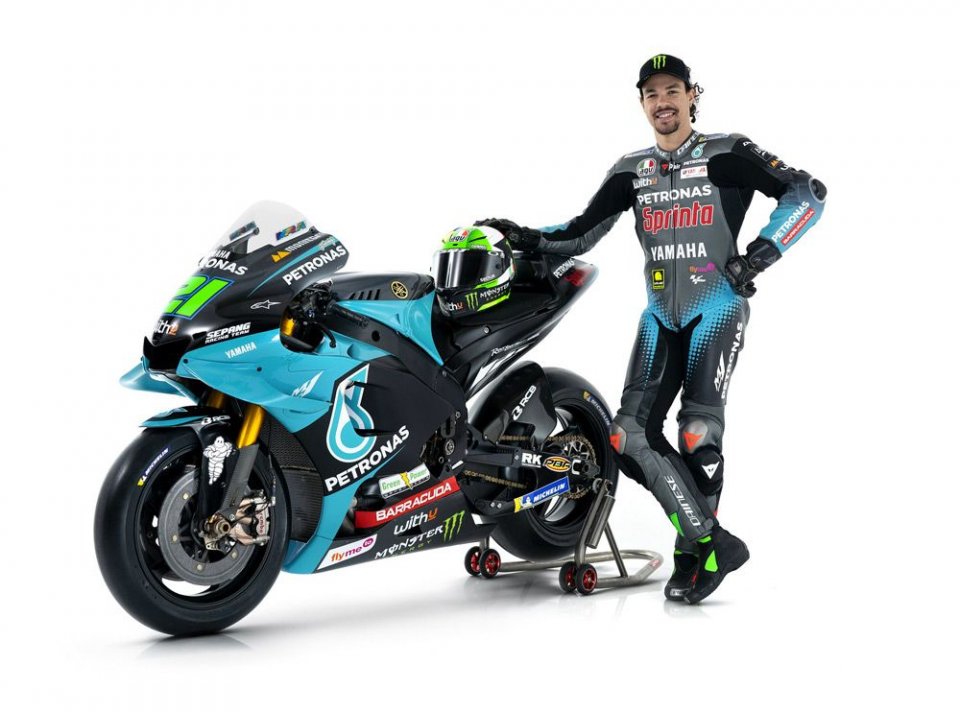 For far too long Franco Morbidelli has been playing as an outsider on the MotoGP field, and it wasn’t always his fault. His debut with a non-competitive Honda in 2018 didn’t help him, the following year he should have been the front runner of the Petronas team, but he came up against Quartararo who overshadowed him. It might have been easy to feel bad about it, but Morbido showed what he is capable of in 2020: three wins and second place in the championship, the best Yamaha rider despite having a lower-spec bike than his brand mates.

Franco, do you feel you are one of the favourites for this season?

“More than feeling that I am, I have to be. I can't hide behind a convenient answer, I know what I did last year and I have to try to improve”.

It won't be easy…

"In the winter I worked like last year, if not better, and now I know myself and the bike more, I also have more confidence in myself".

Were you surprised by last year's results too?

“I felt good on the bike and was able to attack and express myself at a level that no one expected. The goal is to replicate those performances in order to be able to fight for the championship and not just for the win in individual races. In the end, this is my job, but it won't all depend on the rider, the bike will also count ”.

You will remain with the 2019 M1 you used last season…

"I think the gap from the factory bikes will not be as big as it would be in a normal situation, now the development has slowed down and I think the difference, if there is one, will be similar to that in 2020. And then I really believe in the human part".

What can be worked on?

“Technically there are some details where we threw away a few races last year, so we'll have to take care of those. From my point of view, 2019 frustrated me as a rider and that feeling made me come up with something I didn't expect. I'll try to use those feelings again in my favour and hopefully it works (laughs) ”.

In a few days, in Qatar, you will find Valentino Rossi on the other side of the garage. How will you behave with him?

“As with all my friends, trying to be fair to him. We have already raced against each other, so we will continue to do it in the same way, nothing will change. But we must always remember that there is nothing as important as friendship and love. MotoGP is a game and the human side is more important, we must remember that when we find ourselves fighting, as I hope will happen, for important results ”.

"It is difficult to separate Valentino the friend from the rival"

Will you see Rossi as a friend or as your first rival?

“Both things, it's hard to separate them. Certainly, when we are in the garage the more strictly sporting sensations will prevail, so he will be a rival to beat ”.

Is it true that you have often beaten him in training lately?

“During training you can understand a lot of the character and the different facets of a person's personalities, this is what I mean when I say that Vale and I know each other well. But I also know that training is one thing and real races are another, in that case everyone brings out something more and usually positive. Vale knows me very well, which is why he believed in me many years ago when I had no one to support me and even when I was struggling in MotoGP ”.

How can you help each other as teammates?

"I think what will help us will not be the exchange of technical information, but of personal feelings, thinking about bikes and races".

“It's nice when other riders recognize your worth, it makes you proud, but a responsibility comes from this pride”.

Don't you think that this year the team is also betting more on you than on Rossi?

"In Petronas there has never been a number 1, riders are treated in the same way. It is true that my results last year were better than Vale's, but it is also true that he has achieved better results than mine in his entire career (laughs) ”.

Razali said that you are an artist on two wheels, like a painter or a musician…

"I prefer a musician, it will mean that we will try to write a good song together (laughs)".

"It will be difficult for Marquez to go back to what he was before, but not impossible"

In a few days there will be the tests in Qatar, but without Marquez. What do you think about what happened to him?

“He suffered a very serious injury, I do not remember an athlete of his calibre stopped for so long. It will be difficult for him to get back to his former form immediately, but not impossible ”.

Do you think it will be more complicated physically or mentally?

“It is difficult to put myself in Marc's shoes, because I don't know exactly the extent of his injury, if he feels pain, I cannot judge from a physical point of view, but I can from a mental point of view. An injury like this has repercussions on the head, because we are all human and we remember the bad things that happened to us. But Marquez is a tough guy and I don't see any reason why he can't go back to being what he was ”.

"I don't blame Yamaha for not choosing me, the problem is signing so early"

Are you already thinking about 2022, about Petronas choosing another bike other than the Yamaha?

“I try not to think about that, because it doesn't help me do my job better and those are things I can't control. I know that Razlan will make the best decision for the team and consequently also for me ”.

What are your relations like with Yamaha, considering that they did not think of you for the factory team?

“I've always felt good, especially with Maio (Meregalli, ed.) and Lin (Jarvis, ed.), I understand their decisions and I don't blame them. If anything is to blame, it is this fashion of anticipating the times to decide, so it can happen that a rider you did not think of up to then ends up by becoming one of the favourites for the title, as I did. Unfortunately there are conditions that have to be respected ”.