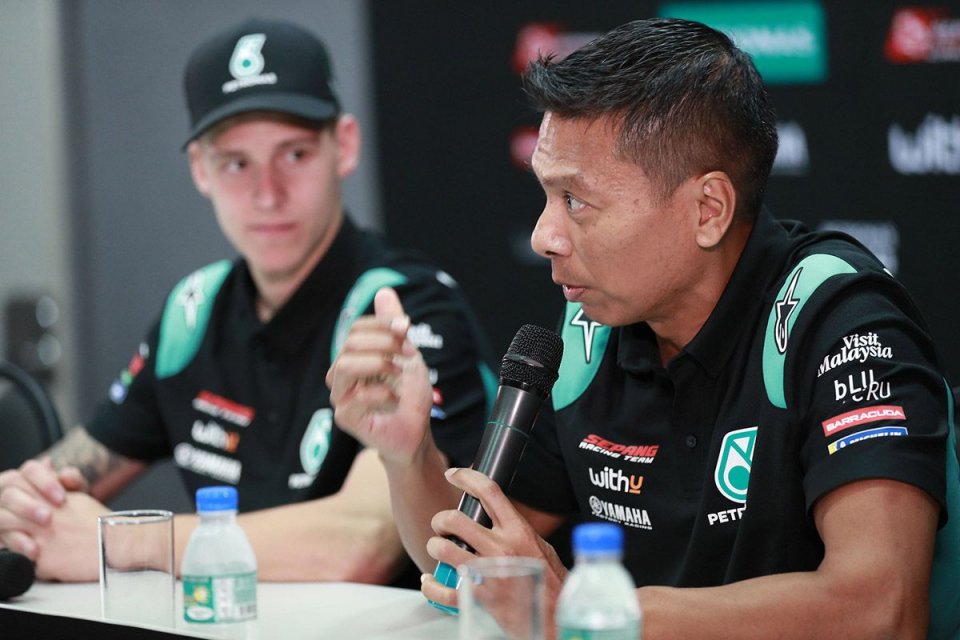 If you want to upset Razlan Razali, tell him that his team is a satellite, or an independent one. “I hate those terms,” he admits with a smile. After all, the Petronas team cannot be defined as second division: it has a sponsor that would everyone would die for and in two years it has put together a trophy case that others dream of. As if that were not enough, this year it will have in its line-up, in addition to the reconfirmed (world champion runner-up) Franco Morbidelli, the living legend Valentino Rossi.

Razlan, how do you imagine the coexistence between the two riders?

“They have a long relationship and are friends, I think it will be easier for them to manage than for other riders. We certainly won't have to put a wall in the garage (laughs) ”.

The Petronas team has the goal of making young riders grow, so why Rossi?

“In a normal season we would have evaluated other names besides Valentino's, but the pandemic has changed things. With Franco we will have a young and competitive rider, while Rossi will bring us stability and results. We made an exception for him ".

What effect did Valentino have on you?

"Unfortunately, in 2020 there was no opportunity to get to know each other or to have dinner together, we only talked to each other in meetings. I don't know him as a person yet, but there will be an opportunity to do so this year ".

Rossi is used to a factory team, what kind of environment will he find in Petronas?

“I think we have a different approach, we have a good balance between people with great experience in MotoGP, like Forcada and Zeelenberg, and others who have less, like me. We listen to what the riders want and try to help them, if we don't like something we say it directly to Yamaha and ask what our riders need ”.

Valentino has only a one-year contract, will there be the possibility to renew it?

"As with all riders, the first 5 or 6 races of the year will be crucial. Rossi is a highly experienced rider, the races will also be used by him to evaluate his performance. Apart from that, the contract is for one year because our agreement with Yamaha, and also with Petronas, expires at the end of the season and we couldn't have made a longer commitment ”.

With Morbidelli, however, you have signed for two years and directly as the team…

"At the beginning of last year all the attention was on Quartararo and there was less attention on Franco. But he had worked a lot in the winter and became very strong. We started thinking about our future in July, when the championship started. At Jerez Morbidelli had a technical problem and Fabio was more consistent, but we couldn't wait and risk someone taking Franco away from us, continuity is important for us, so we decided to sign directly with him for two years ”.

What sort of rider is Morbidelli?

"Franco is an artist, for the way he talks, the way he behaves. He is like a painter or a musician, but on the bike. I really like his attention to diversity, he is a great person but on the track he is aggressive like all the riders ”.

He is also the world championship runner-up, will he feel the pressure this year?

"Franco has already won a title in Moto2, he has the experience to handle this kind of pressure, plus he is more mature than other riders, such as Quartararo. What he did last year, after being in the shadow of Fabio who was a rookie in 2019, allowed him to move up a level. Franco knows that nothing is impossible and we believe that he can fight for the championship ”.

“We all know Franco is a competitive rider, including Yamaha. Only contractual and economic reasons did not allow him to have an official motorcycle. In any case, he will have some evolutions, we will know which ones in Qatar, and already last year he received some updates ”.

Will he not start at a disadvantage?

“In 2020 Yamaha had brought a completely new bike, which won 4 races with Quartararo and Vinales. The absence of tests, however, prevented development. I am sure that the 2020 M1 will be more competitive this year, but I also know that Franco will be more comfortable on the 2019, which he will ride for the third year. "

The contract between the team and Yamaha expires at the end of the year, how is the renewal going?

"We started discussing the extension with Yamaha since December last year. I already have the first draft proposal for the next five years from Yamaha. We hope to be able to complete everything by May or June this year.”

So you are not afraid that Valentino may ‘steal’ the M1s with his team?

"With regards to the potential new team by Valentino, I would not really want to comment on that."

But it is rumoured that other manufacturers have also come knocking on your door, like Suzuki ...

"I would not deny that when other manufacturers want to come and talk to us, we listen, our door is always open to listen and look at all possibilities. But our final decision on selecting a manufacturer also depends on what our title partner wants.

What if VR46 proposes a collaboration?

"I repeat, we do not close any doors, we do not exclude any opportunities, even if it is Petronas who has the last word on certain decisions. If they come to talk to us we will listen to them”.

Has Yamaha accepted your requests in the new contract?

“We were pleased that Yamaha has recognized our work in developing riders and told us that they wanted to be more involved. We start with the youngsters in the Asian and Japanese championships, then we take them to Moto3 and Moto2. On the other hand, we asked Yamaha to be quicker in providing us with updates to the bikes. "

Now that Hamilton and Rossi have the same sponsor, can we expect any events together?

“That would certainly be nice, but with a pandemic underway it's not that easy. However, it is not our team's job to think about how to exploit Valentino's popularity, it’s the results on the track that matter to us”.

Also in Moto2 and Moto3, what are the objectives in those classes?

"In Moto2 we expect a lot from Vierge and Dixon, the minimum goal is to get our first podium in this class and then repeat the result regularly. In Moto3 we will have McPhee and Darryn Binder, two riders in their last year in this category, so it is in our interest to do well: on paper we can fight for the title ”.