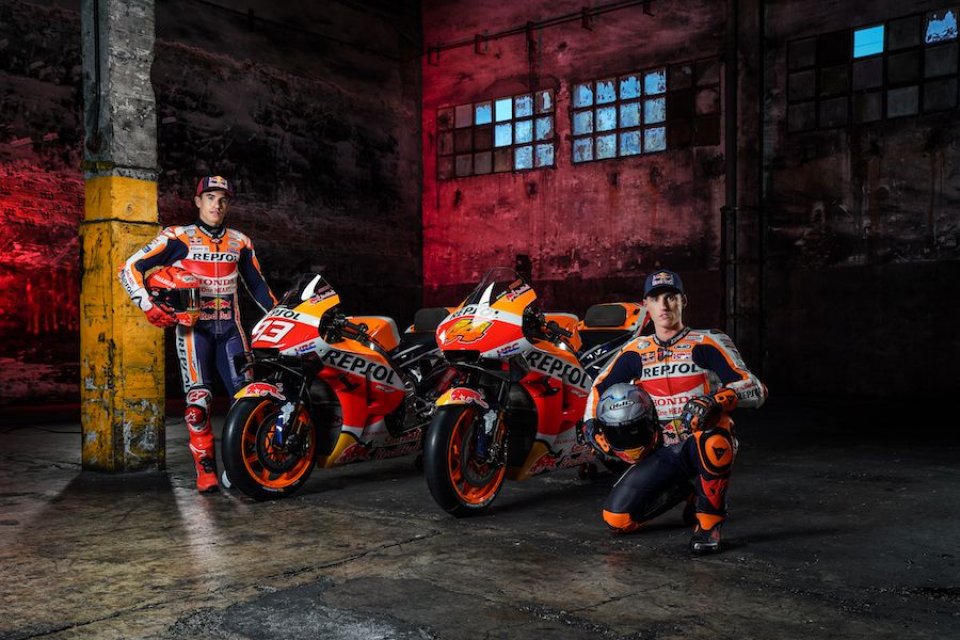 Honda presented its factory team today. After the launch of Lucio Cecchinello's LCR satellite team, we were finally able to discover the bikes of the works team that this year will race with the pairing of Marquez-Espargarò. Much of the attention was paid to the 8-time world champion who, however, gave no indication of when he might return (HERE IS WHAT HE SAID).

For the rest, the presentation focused on newcomer Pol Espargarò who will immediately have to try and get to grips with the Honda to achieve the team's objectives.

"We hope Pol can bring results to the team - said Alberto Puig - he has experience, he is not a kid and his target will also be to fight with all the riders and with Marquez. We expect and hope for a big competition inside the team and for Pol to like our team and bike soon as possible. We will try to give him our best material for him to show his potential".

The rider himself, however, preferred to keep a lower profile. Pol is an experienced rider who has ridden different bikes in the top class, he knows that a period of apprenticeship will be needed.

"I don't know what to expect from this season - said Pol Espargarò - 2020 was difficult for Covid and we still don't know exactly where we will race this year. I won't have many days of testing available and I think it will be a complicated start to 2021. Certainly it will be important to be very calm and have everything more or less as much under control as possible It is exciting to have an opportunity like this, now you see it is real.”

On his rivals for 2021, however, the former KTM rider’s ideas are clear…

"Well, if Marc starts well in Qatar, he'll be the one to beat. He's number one even though he didn't race last year. Sure, he's going to be a tough guy to beat he's the fastest on the grid. He's been like that for many years in the past and is a benchmark for me and for the whole MotoGP category. We'll see, but we certainly can't forget the Suzuki and the Ducatis. It will be an interesting but also a difficult season. "

Tetsuhiro Kuwata instead has ideas more similar to those of Alberto Puig and, in addition to praising Pol Espargarò and Marc Marquez, said what he thought of the changes made to the bike in this ‘freeze’ period for engine development.

"We have a big challenge ahead of us, we normally develop the engine but this year we couldn't do it, we focused on other areas and tried to improve them. The chassis has changed in some parts. Our approach hasn't had too many changes. Pol has the speed, we have prepared the bike for him and we hope he can fight for the championship. Marc, on the other hand, needs time to recover but I think he will come back stronger than before. "