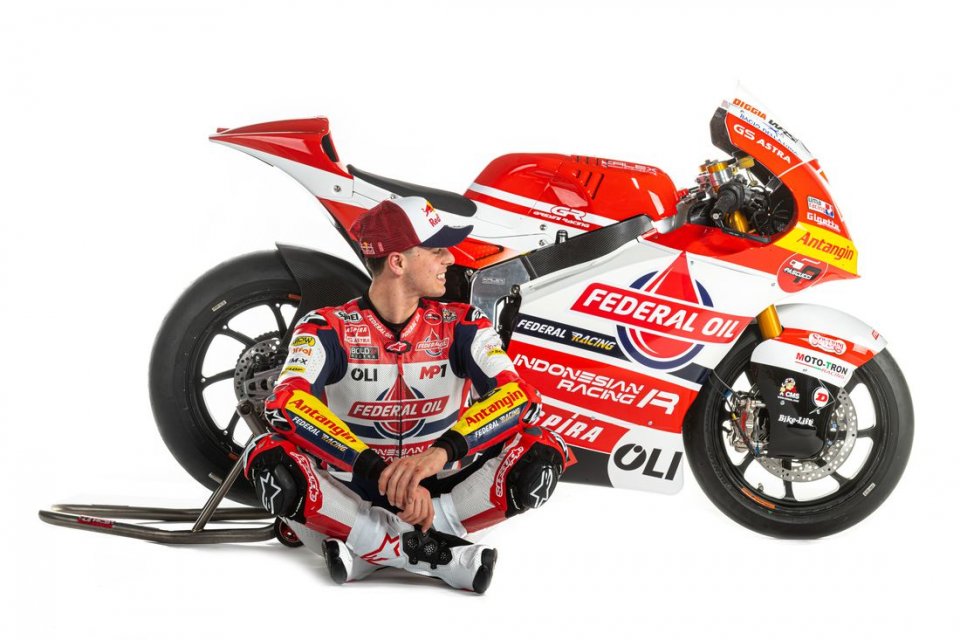 The new Kalex bikes of the Gresini Racing Moto2 team have been unveiled, in the presence of Fabio Di Giannantonio. For the Roman rider, 2021 with Fausto Gresini's team will be a new first year together. After three years of experience in Moto3, Diggia signed a two-year contract with the Speed ​​Up team in 2019, a relationship that never took off. The #21 said he has returned to feel part of a team that he calls ‘home’. Still waiting for his first victory in the middle class, Fabio did not rule out the possibility of winning the world championship.

You are in your second season in Moto2 and your first on a Kalex, what are the expectations? Can we say that this will be the year of truth for you?

“It will certainly be an important year, I have all the right credentials to do well. I’ve changed teams and bikes, I come off the back of two years with Speed ​​Up and there will certainly be some differences, I think I can do well because when there is a team that really believes in you, and that's what I perceive now, you can do everything. I can't wait to start, when I finally get on the bike I will find all the answers, but I’m really eager to get going! "

Towards the end of last season it was said that Aprilia was keeping an eye on you for MotoGP, but you are very attached to Fausto, so nothing came of it. Will you have to prove you're ready this year to make the leap next year to the premier class?

"Last year, towards the end of the season, when I started talking to Fausto, the possibility of moving to MotoGP with Aprilia also arose, but then talking about it we found an understanding to move forward together. After all, I’ve already demonstrated what I can do, and so we talked about going to MotoGP next year, always with Fausto. I'm happy, I thank Aprilia for thinking of me, but I'm excited for these two seasons with Gresini. "

Last year Marco Bezzecchi went from a KTM to a Kalex and immediately fought for the world championship. This year you are expected to be one of the riders who will actually fight down until the last race, seeing as you’ve moved from a Speed ​​Up to the most coveted bike in Moto2: the Kalex?

“The Kalex has certainly been the most competitive bike in recent years, a lot of riders have won and made podiums. With Speed ​​Up we did well but we have always lacked something and that is what I am looking for and I think I will find in the Kalex, I am excited. I don't know if I am among those who will fight for the world championship but now I want to be as ready as possible for the first race. If you work well in the tests, and at home, you will find it in the race, so it becomes more of a verification of the work done. You have to work hard and the results will come by themselves. "

Last year you had a bad first half of the season then you were reborn, did you work on this aspect? How did you try to work in order to start over from where you had finished?

"Last year we didn’t start very well, the season was quite difficult, especially the first six races. We didn't understand each other well within the team and so this was the cause of the discomfort in the first Grands Prix, afterwards we found the right balance and we were always very fast and competitive. This year I think we will have a different story, there are few tests but the important thing is to work well. When you feel comfortable with the team and you are looking for a good base on which to start then everything is a little easier. I think the secret is to use these few days to work well. "

Can we expect a collaboration between you (Di Giannantonio and Bulega, ed.) both in free practice and qualifying? Or will both of you go your own way both technically and on the track?

“Obviously we are in the same team, if we both go well we will have an advantage. This would improve the times and the bike, it would help both and above all it would be a boost if one of the two were at a disadvantage. For my part, there would be no problem in testing and free practice, but then when you are out on the track ... the race is the race and it’s every man for himself. "

What do you expect to find on a technical and human level in the Gresini team that you missed with Speed ​​Up?

"I would not like to make comparisons with the Speed ​​Up experience, this is all new. I am totally focused on the present and have no time or desire to compare. Now I feel like I'm at home, I'm back with the Gresini team and with Fausto, we're all excited and I feel good in this team."

Compared to last year, have you changed anything in terms of physical and mental preparation? How important is it to win in Moto2?

"During the winter I changed my preparation a bit, especially after the last race in Portugal. I hurt my right knee and had to adapt my preparation to that. In the end, more or less, the winter preparation is always the same, the goal is to arrive as in form and in good shape as much as possible, so nothing special. On a mental level obviously I will approach this season the same as usual, with the mentality of doing as best as possible, with the awareness of having a good package to do it. In the last two years there has been a lack of attention to detail, both on my part and on the part of the team, which I think and hope to find here. This will be the key to victory. "

Last year you fought several times for the victory but it never came. Do you think this new first year with Gresini will allow you to score a win in the first rounds? Also, the goal is always the world championship, can this also be achieved immediately?

"We always start with the goal of winning races, so yes, why not start from Qatar. The tests will be very important to get to the start of the season ready to win and make podiums and be fast. Towards the end of the year if you have accumulated the victories and been consistent, you become one of those who could win the world championship. So for sure the goal is to be part of the game. "

How do you feel about the Kalex? Have you already had the opportunity to set up a working framework with your new team?

"I've been studying it since the end of last season, when I already knew that the agreement with Fausto would be concluded and we would start this adventure together. From there I started to take a look at what the new bike would be like. During the winter I studied a lot, thanks also to the videos that MotoGP provides, I was very attentive to what the difference in riding would be between one bike and another. We often spoke with the guys from the new team and we tried to set up the work with an idea to follow and we will certainly arrive at the tests with clear ideas. "