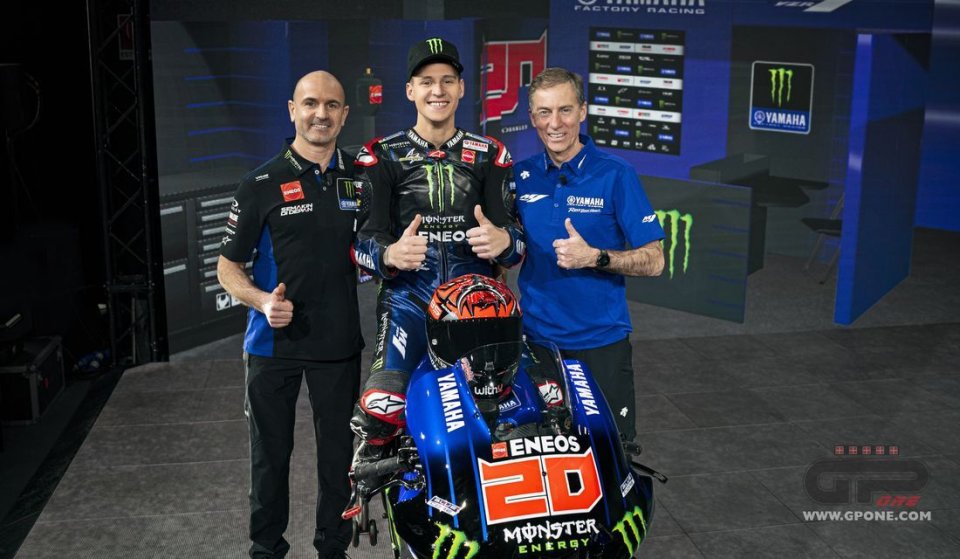 What sort of virtual presentation would it be without a hashtag? The one chosen by Yamaha is #InItToWinIt, a bit of a tongue twister that speaks for itself, a goal common to all, but which the Iwata manufacturer has not been able to honour since 2015. After Honda's successes, it was Suzuki who took advantage of Marquez's absence last year, just when everyone was putting the M1 as favourite for the title.

After two 1-2s at Jerez with Quartararo and Vinales (the new pairing of the official team), the disappointments outweighed the successes last year and only Morbidelli managed to salvage the season in some way, without however getting the new bike or the move to the first team for 2021.

Lin Jarvis, Yamaha's boss in MotoGP, doesn't want to point the finger at the Frenchman: “I don't think the pressure was Quartararo's problem last year - he said - After winning the first two races expectations were so high, but the faults were technical problems and lack of consistency. We did not provide Fabio with the tools to keep winning, so it was our fault. He is very young, he has won three races and I think he can win more this year, it is up to us to put him in the right condition to do so. "

Morbidelli also won three races, but that wasn’t enough to guarantee him an official bike.

“Franco had a great second half of the season, he impressed a lot of people. There are various reasons behind this choice: an official bike costs more and we are not at the best time for sponsors, moreover, you can't decide something like this in November, you need time to provide the material. Morbidelli deserved a factory bike, but unfortunately he won't have one. However, his bike last year was very close to the factory ones and with the freeze on engine development I don't think he will have a big disadvantage ”.

You chose Quartararo alongside Vinales, will they be difficult to manage in the same box?

“If there are problems it will mean that both will be fighting to win and I think they can, I think they can both be in the top three in the standings. They get on well with each other, they have the same passion for motocross, I would say that we are starting the season with a very solid base. They will be able to push each other and learn, but the same goes for Valentino Rossi, who will be in the garage next door and will have the same bike as theirs. "

Will Valentino and Petronas be pitted against each other to become the Yamaha satellite team in 2022?

“As you know, our contract expires at the end of the year and then there will be various changes, because Aprilia and Suzuki could also have a second team from next year. Petronas has done extremely well in these two years, we have no doubts about its abilities, and from what I understand VR46 has an option to enter MotoGP. Given the relations we have with the two structures, I think they are two candidates but we have not yet started talking, we will do it between April and May ”.

"I hope it will be Yamaha's year, but nobody knows (laughs). In 2020 I didn't expect to have any technical problems, but I think we will have a very balanced bike this year. We will have a lot to do in testing in Qatar and I am happy that Crutchlow will work with us ”.

Have the engine reliability problems been permanently resolved?

“Yes, because we will start with valves free of defects. Over the past year we have learned a lot about how to manage our engines, because we were forced to use them for a lot of kilometres. I have no doubts about the reliability, but I also know that the power deficit from our rivals will remain, but this didn’t stop us from winning seven races in 2020 and we can do it again. "

While the technical problems are solved, Vinales must find consistency. How can you do that?

“In recent years in his garage there have been many changes. He started with Ramon Forcada as crew chief, then Esteban Garcia arrived and other people changed. Last year, due to Covid, first his suspension technician and then a Japanese engineer retired, this year we will work on other details, essential if you want to win. We will provide him with our best support ”.

Last year he often complained to the press ...

"Of course we weren't happy with these negative comments, but the important thing is to understand the reason for this frustration. There is a need for positivity, negativity does not help, you have to understand what the problems are and solve them, eliminate those moments in which Maverick loses heart ".