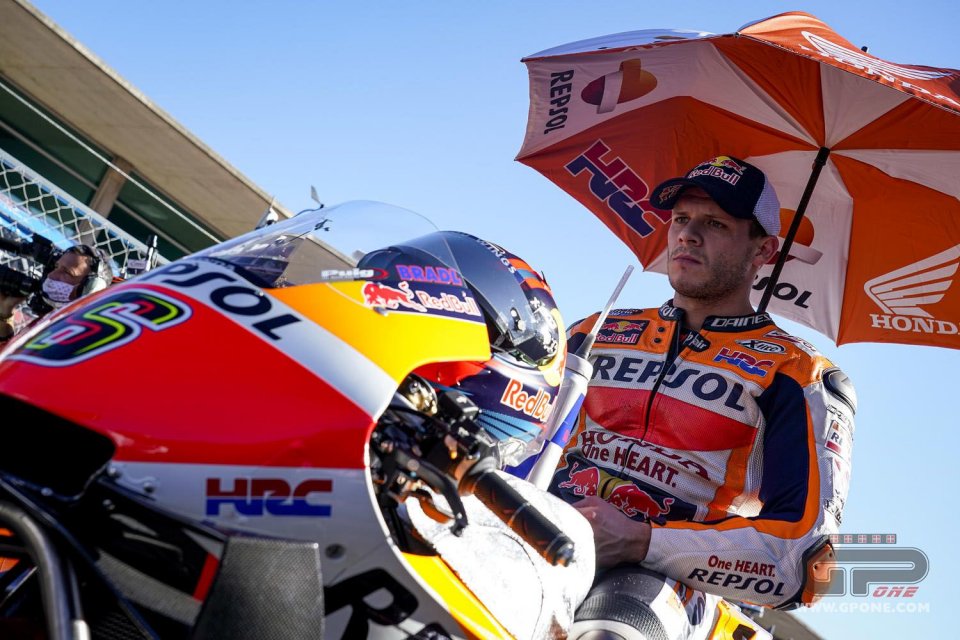 Stefan Bradl proved to be the lifeline for Honda in 2020 and could also be so in this first part of 2021. The German had been designated as official tester but the developments of Marquez's crash in Jerez actually opened the doors for him to a season as an official rider for Honda, which had to do without the Spanish champion.

This situation was clearly neither foreseen nor foreseeable at the beginning of the season, but it objectively created an advantage for Honda and for the rider, who in addition to covering the role of tester, also raced an entire season helping HRC to develop the RCV213. In fact the bike in the second half of 2020 started to go fast with all the riders, with Nakagami who was in with a shot at the title until a few races from the end of the season and who without the crash at Aragon he could have perhaps won a race.

Bradl was able to take part in the tests in Portimao reserved for test riders and then do the Grand Prix. That was a session in which Pirro for Ducati, Pedrosa for KTM, Guintoli for Suzuki, Lorenzo for Yamaha and Savadori for Aprilia also took part in, together with Aleix Espargarò and Bradley Smith for the latter factory which benefits from the concession rule. Bradl in Portugal was particularly incisive, finishing an excellent weekend in seventh place.

Now that we are at the start of 2021, we are in fact in a situation similar to that of last season. Marquez does not know when he will return, even if the latest news seems to indicate that it is likely soon. The Motorcycle Sports Manufacturers Association (MSMA) is evaluating whether it might be appropriate to intervene, limiting the number of rounds that a test rider can compete in as replacement for an official rider during the season to a maximum of three or four races.

Pit Beirer, KTM's Motorsport Director, told our colleagues at Speedweek: "Honda certainly had an advantage last year thanks to test rider Stefan Bradl. As a world champion team, HRC had testing opportunities like only a concession team would otherwise have. That was unfair to the other manufacturers. That is why we will be discussing whether in future a test rider may step in as a substitute rider a maximum of three or four times a year. Our approach is not directed against Stefan, but it is about equal opportunities.”

As reported by Speedweek, the thing that bothered the other manufacturers the most is the belief that Honda actually knew very well that it could not count on Marquez for the whole of 2020 after the second operation, thus preferring to let Bradl race on call rather than promote him to the role of official rider, which would have prevented him from participating in sessions dedicated to testers. In fact, if Bradl were to race in Qatar, he will arrive there with twelve more days of testing behind him  than all the other riders on the track thanks to the Jerez sessions and then also the shakedown day reserved for rookies and testers in Losail, which he will also take part in.

Bagnaia: "Stoner thinks like a rider, he is able to get inside your head...