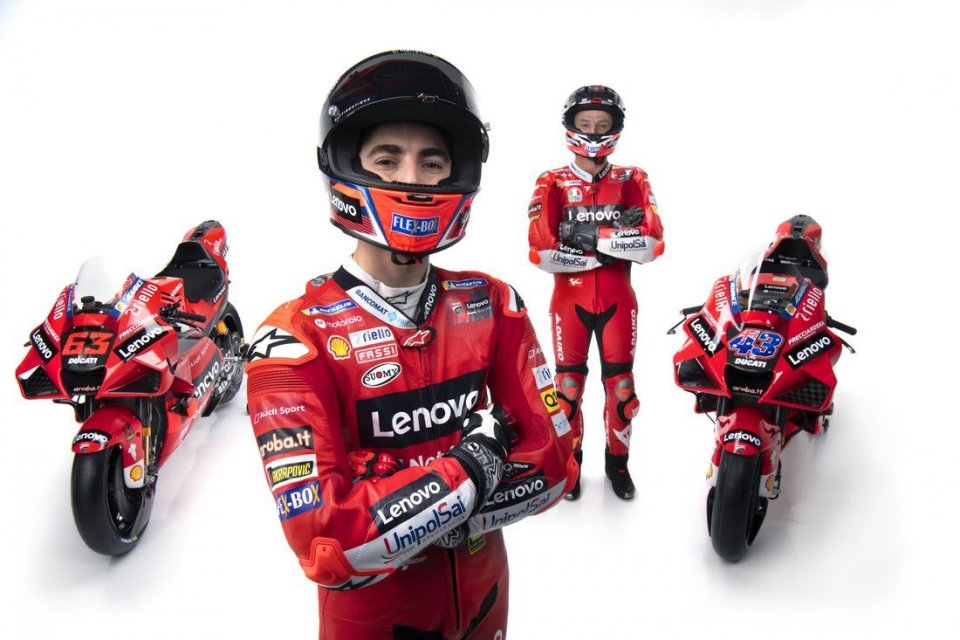 Red is red, as it hasn't been seen for some time. Young too, as the new course wants. Ducati made its (virtual) catwalk yesterday with all the good intentions that the beginning of the year requires, but to be honest only one: to win. This is what they have been wanting in Borgo Panigale for the past 14 years and the 2020 constructors' title can only be an appetizer that has increased their hunger even more.

After all, you can't live in the past and the one linked to Casey Stoner becomes more and more remote with each passing season. After the magnificent Australian, a succession of more or less well-known names have stepped onto the Red bikes one after another, from our very own Valentino to Dovizioso who was responsible for its resurgence, but with mixed fortunes, the result was the same for everyone. Bagnaia summed it up frankly: "On the Ducati many riders have tried to win, but only one has succeeded". Here Stoner's ghost reappears and the only exorcism to chase it away is to put that number 1 back on the fairing of the Italian bike.

Dovi came close, but failed, so within the Bologna manufacturer’s corridors they decided it was time to change strategy. After all, the bike is there and Dall’Igna's Desmosedici over the years has become one (if not the only one) of the benchmark bikes in MotoGP. A great engine and many options then copied by the competition, from the wings onwards, passing through spoons and lowering devices, not to mention the other secrets jealously guarded by the fairing. “The base must be good, but innovations can make a difference”, said Ducati’s general manager while smoothing out his mechanical satyr beard.

Perfect, but so why hasn't the D16 been a winner yet? "The bike reaches a certain point, then the rider has to make up the rest", Dall’Igna replied. And here Stoner comes back to mind, one who could have even covered with his talent a bike full of holes, which the current Ducati is not, but something else was needed and the program for the next few years is clear: away with the ‘senators’, young riders arrive hungry and are different in riding style and character, let’s throw them all into the fray to prove that they are the best.

It's a path already trodden by KTM and which has given its results. Now it's up to Ducati, which has fresh - but not inexperienced - riders in its three teams. Out of six four have won at least one title in the minor categories (Bagnaia, Zarco, Bastianini and Martin), the other two have battled for it (Miller in Moto3, Marini more recently in Moto2). All are flanked by internal men who break down the barriers between the official team and the satellite team, just think that Bastianini will have Alberto Giribuola, Dovizioso's man in the shadows in the official team as his chief engineer.

Another strategy is to offer everyone an annual contract, a way of saying: if you want to stay you must deserve it. But also: if you do well you will quickly climb the steps to be dressed in red. “It's not easy, but it helps you grow” guarantees Miller, who has reached the summit after three years in Pramac.

Ducati therefore is playing on the attack, but it is also taking risks. Because if it now has the best nursery in MotoGP, it doesn't even have a plant that can provide shade when the sun beats down. If we ignore the metaphors, and take away the three rookies, the other riders have only won one MotoGP race between them (Miller, in Honda, in a very particular Assen GP). Thinking of winning the war with soldiers who haven't yet won a single battle is a bit of a gamble, but nothing too great in motorcycling.

Mir hadn't won anything at the beginning of 2020 and we all know how that ended, Stoner (yes, him again) when he crossed the doors of Borgo Panigale only had one podium on his record sheet. Both, however, had already shown what stuff they were made of and the same can be said for Jack and Pecco.

The Australian has reached the right maturity to be one of the protagonists of MotoGP, the Italian has shown speed but must find consistency. They are both in the right place at the right time in their careers and now it's all in their hands. They will have to prove that they know how to beat outside competition, but also that on the inside.

Meanwhile, Ducati has decided to organize a sort of company internship for its quickest employees. All six MotoGP riders will be at Jerez tomorrow and Friday, on Panigale V4s. A first derby match, to get used to the fact that finishing runner-up is already a defeat…

“It’s happened to me a few times in the past. My arm is fine, but I left something on the table in qualifying. It’ll be important not to make...
19 hours 43 min ago