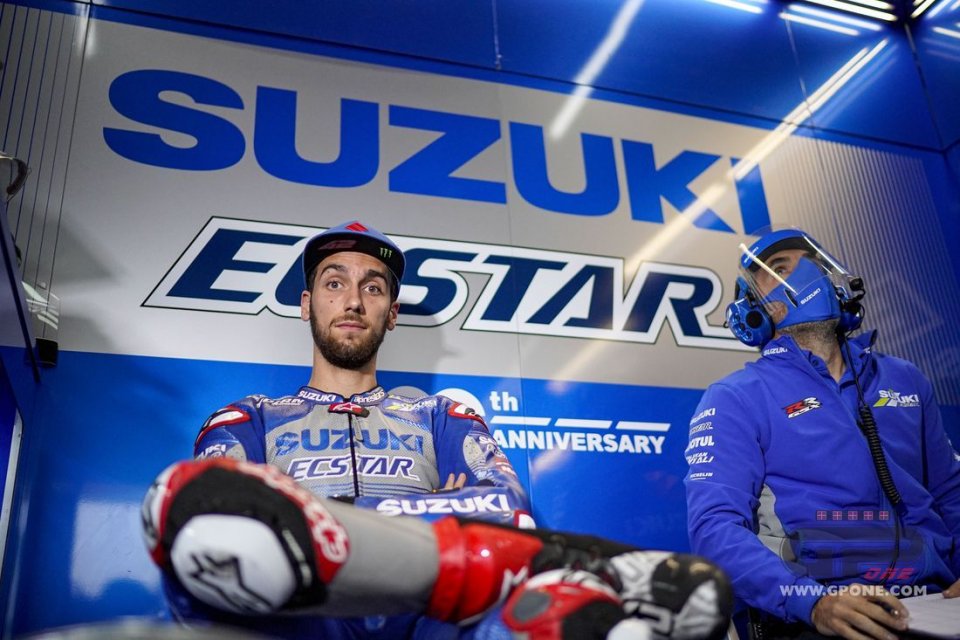 Alex Rins started 2021 with a press conference from the pits in Portimao. The Spaniard is at the Portuguese circuit to train with his Susie, the GSX-R that he has customized. "Last year I rode with a completely production bike, it also had headlights and a passenger seat. Now it’s prettier” he smiled. Alex is sharing the track with Albert Arenas, and on Wednesday Valentino Rossi and the other VR46 Riders Academy riders will also arrive in Portugal.

Rins spent the winter in the best possible way.

“I'm fine and waiting for testing in Qatar - he says - Unfortunately we won't go to Malaysia, I was excited to be going back there. For the rest, I'm happy because I didn't catch Covid and I'm training to the maximum in the gym, on the dirt bike, I'm doing a little bit of everything ".

You were worried about your shoulder at the end of the season, how's it going now?

“I am positively impressed because it is not giving me problems in the gym, I feel perfect. We still don't know for sure how we will start this season, maybe it will be a bit strange again, but I want to ride my MotoGP bike as soon as possible and give 100%. "

Davide Brivio will no longer be in the garage, how did you react when you found out?

“He called me one day before the news went public, I was in my car, coming home from a vacation in the Maldives. When he told me I thought it was a joke, it was a shock for both me and the team. It seems Suzuki won't put anyone in his place and I think it's the best thing, it's not easy to choose a new team manager so quickly, but the situation within the team is good. "

Will you miss him a lot?

“Of course, we talked a lot, we joked and he gave me advice, he just needed to look at me to calm me down, give me positive feelings. I hope he comes to some races as a guest, certainly not the first one because there will be the Formula 1 GP, I wish him good luck ”.

Would you have renewed with Suzuki in any case if you had known that he would be leaving?

“It's an interesting question, but Suzuki is like a big family to me. I don't know if there is anyone who can replace David, we will see, for sure Sahara will be more present ”.

Do you think Brivio will also be successful in F1?

“He will certainly do well, let's not forget that he created the Suzuki team practically from scratch. He will have more people to manage, but he has all the qualities to succeed ”.

“Trying to change those little things that didn't work out last year. My shoulder is better, so the goal is to fight for the title. In 2020 I came close and our team and our bike succeeded. I also know that the rivals are very strong, in fact there have been many different winners: the key will always be to stay ahead. I'm still angry about my crash in Jerez, but you learn from mistakes ”.

Who will be your biggest rival?

"Talking about rivals, it's quite early, but I think the first one will be my team-mate Joan Mir because he got the title last year and for sure he will try to keep it. It's a motivation for me. Joan did a super job last year and the first rival is your team-mate so I will give my 100% to try to beat him.”

"It's very difficult because we don't know his condition. Everybody's talking a lot, but I think until the last moment nobody will know the reality or the truth. I like to see him on track, he is very talented and you learn a lot from him".

Do you expect him to be competitive immediately?

“I hope he returns for the first race, of course, and that he is fighting. A lot will depend on his physical condition.”

“In many things, in the communication in the garage, in the work on and off the track, in understanding the bike more. As a rider I would like to improve in qualifying ”.

“There too we can always improve but we are already at a very high level, we are where we should be. The bikes will be very similar to the 2020 season because we have the frozen engines, just we will have one modification allowed on the fairings."

How do you expect the first race after five days of testing in Qatar?

“It will be an advantage especially for rookies and for riders who change bikes. After so many days I think that in the race we will all be closer than we have ever been before. Of course we will have to spend a month in Qatar and I would prefer to do it in another place, there is not much to do and it is very hot ".

Have you seen the new turn 10 of the Barcelona circuit, what do you think?

“I think the track is safer now, it's better for everyone”.

Given the risks of Covid, Rea proposed to introduce the idea to drop the worst result in SBK. Would this also be useful in MotoGP?

“It would be something different, like Superpole instead of qualifying. We talked about it in the Safety Commission but we didn’t go any further, I am a consistent rider, so it would be the same for me, if I had to vote I would abstain ”.