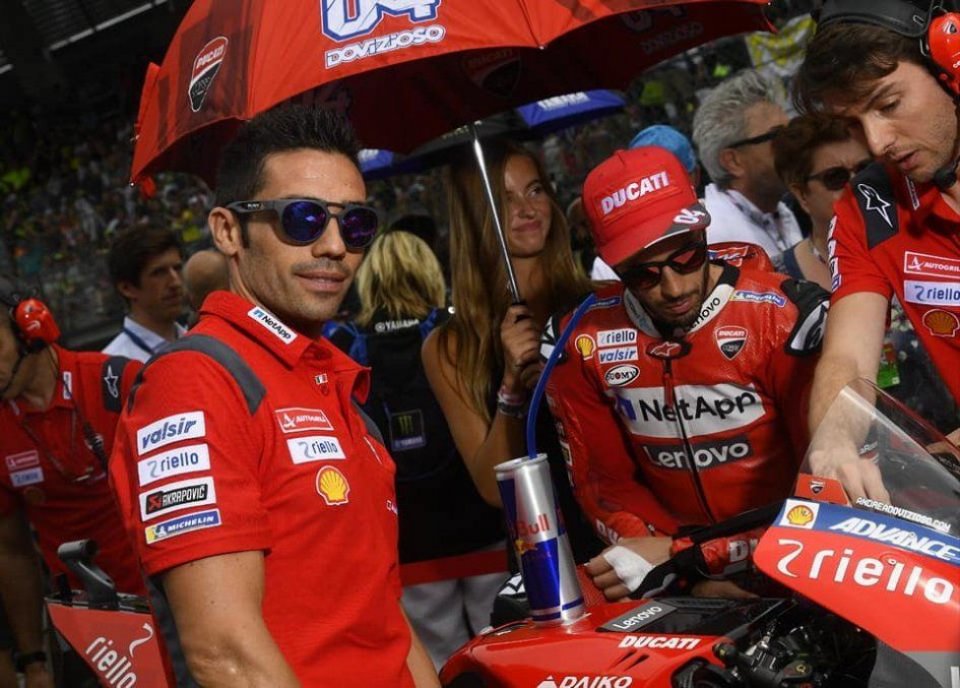 We saw him in action with the road bike in Jerez, we will find him on the same circuit in less than twenty days, for the first test of the new year on the MotoGP bike. We are obviously talking about Michele Pirro, with whom we exchanged a few words during the Superbike Jerez tests, where the weather changed everyone’s plans considerably.

Nevertheless, the Ducati test rider, together with Johann Zarco, took advantage of Thursday afternoon to get out on the track and shake off some rust after the last track test at Misano in November. With Michele we drew up a balance sheet of the last season, which saw among other things Dovizioso’s farewell to Borgo Panigale, but at the same time we also looked forward to the new year, whose curtain will rise in March on the Losail track.

"Despite the rain and the weather, in the end we managed to get rid of some rust on Thursday afternoon - said Pirro - it was nice to see some Superbike riders and also Zarco, with whom we shared the garage and exchanged a few words. Too bad about the rain, but as we all know, we can't control the weather and this is part of the tests”.

Michele, the new year begins here at Jerez, also because the MotoGP tests will take place in mid-February. Where do we start from?

“We start again from a complicated year like 2020, conditioned by Covid, which has certainly influenced the work of all the teams in the World Championship. For the new season, however, it will be possible to bring some new features to the track, such as the chassis and fairing, even if the engines remain frozen. It will therefore not be easy to move and make any particular changes, but we are working at Borgo Panigale. In 2021 we will anticipate everything that can be done in 2022, starting from the 2020 base which is certainly solid".

The biggest problem, however, remains that of the borderline between improving and taking one step back…

“The bikes have now reached such a high level that if you try to take one step forward more than you should, then you risk taking three backwards and compromising what you did well. Among other things, it is not easy to even find one-tenth of a second in this MotoGP. The most important thing about the work done in Ducati is that we have always moved forward in our project, while other manufacturers such as Honda and Yamaha, just to give an example, have sometimes had to go back. This has never happened in Ducati and should make us reflect on what has been done ”.

Michele, in 2020 the tyres put several riders in difficulty. Then, as well as this, there is the issue of turning, which has been a Ducati problem for years…

“I honestly can't understand when sometimes the finger is pointed at Ducati. It is true that there are some aspects to improve, such as turning, but to date the Ducati is the most balanced bike in MotoGP. Look at the results of last season: in all races, with the exception of Aragon 2, there was always at least one Ducati fighting for the podium or even for the win. I would really like to emphasize this and it would be nice if an article was written on this aspect, namely that the Ducati was the only bike capable of fighting for the podium practically every race weekend. "

The title however was won by Suzuki…

“The Suzuki is a balanced bike, with two excellent riders, capable of finding the right balance very quickly. The fact is that when the opponents managed to get things into shape, they were on the same level as Rins and Mir”.

So does the Ducati have to reach the same balance as the Suzuki?

"No, the Ducati does not have to get to the same balance as the Suzuki. It is the Ducati riders who in 2021 will have to achieve the balance of Rins and Mir. In fact, in 2020 the Ducati proved to be a competitive bike with which all the riders could aim for good results".

Speaking of 2020, the year will also be remembered for Dovi's farewell…

“You have to be consistent. I’m sorry it came to an end after such a long time. Dovizioso struggled more than usual in 2020 compared to previous seasons. As Gigi said, stories come and go. I'm sorry for Andrea, since he and I are friends. There were certainly some situations where Gigi took one position and Andrea another. "

How much will Ducati miss Andrea?

“In my opinion it will be more Dovizioso missing Ducati. Honestly, I could never have imagined he would show the growth of the last four years. Hats off to him for the work he did and the determination he put into it. At the same time, I am of the opinion that without Ducati it would have been more difficult for him to arrive at that level. I say this because Ducati was a second family for Andrea. Maybe he won't be able to prove otherwise, but from the inside we did a lot for him, trying to create a favourable environment to allow him to get the most out of it ”.

Unfortunately you weren't able to win the World Championship...

“We all did our best, fighting against a phenomenon like Marquez. Unfortunately, coming to an end like this is not the best. Maybe it could have ended better. But now we have to think about the future and try to win this World Championship with young new riders ”.

This is the news everyone was hoping to hear and means that the season will start in spectacular fashion at the Bugatti circuit, one of the most...
23 hours 33 min ago

Fraser has participated in MotoGP events in the Red Bull Rookie Cup. He also has experience in the Moto3 class and its predecessor, the 125cc class.
1 day 5 hours ago

In the new episode of Inside Pass, Vanessa Guerra takes us into the difficulties of the most unique Grand Prix of the year
5 days 2 hours ago

Andrew Irwin: "I aim to fight for the podium in every race, with Danny we can contribute to the development of the bike". Danny Buchan: "With the...
5 days 20 hours ago

The organizer has announced that there will be no spectators, for now the race is confirmed unlike the already cancelled motorcycle 24 Hours race
5 days 22 hours ago

A Dorna delegation flew to Lombok where work is continuing not only on the new circuit, but also to adapt the airport to the arrival of cargo for...
1 week 2 hours ago