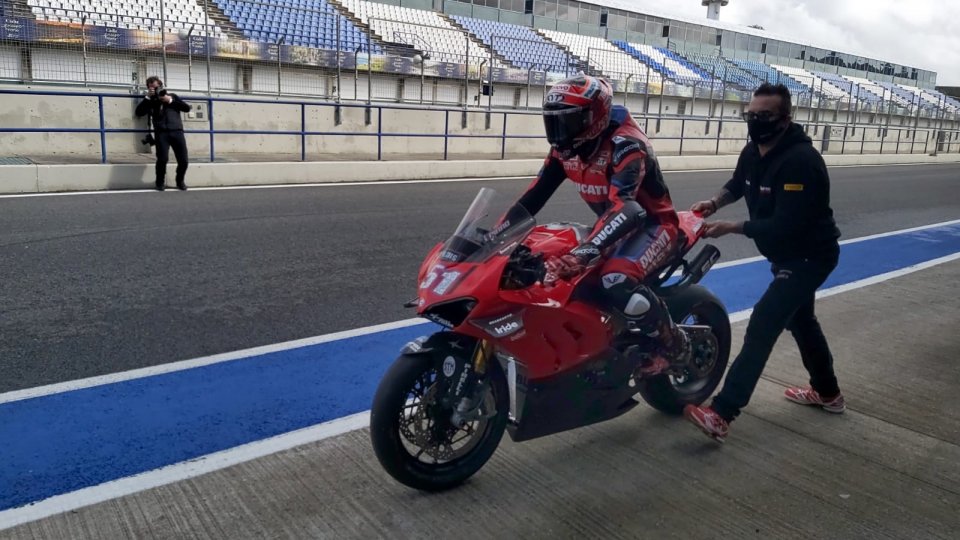 Michele Pirro proved to be one of the 'daredevils', if we may say, of the two days of Jerez testing. In fact, the Ducati test rider waited for the track conditions to improve, taking to the track with the Panigale V4S.

A few minutes later Johann Zarco also followed with the same bike. It was therefore an opportunity to see them both in action in a different context than usual. There was enough time to share the Andalusian track and then exchange some opinions, before taking off their leathers for the day.

"In the end I managed to do about 40 laps - declared Pirro - unfortunately this afternoon the track was not in perfect condition, as there were some wet sections. However, it was useful to shake off the rust accumulated in recent months without a bike. Furthermore, I was pleased that Zarco was also there, a fast rider with whom we exchanged some opinions and views about the bike ”.

You took to the track with the Panigale V4S. How useful do you think your feedback can be for the SBK riders, who are involved with the V4?

"I take the view that it can be an important contribution. The Panigale V4S is a basic bike that works well at high levels, while the SBK bike has some aspects granted by the regulations, which allow you to use some MotoGP-type components such as the fuel tank, the rear frame, the swingarm, and then by intervening on stiffness. The street version is therefore a bike with a fast base, which allows you to have fun and also push hard. The SBK, on ​​the other hand, is more complicated and to understand the difference, you have to take it to the limit ”.

With the V4S can we therefore say that an amateur can feel like a MotoGP rider?

"For sure, with the V4S, any amateur can feel like a MotoGP rider, since there is this philosophy behind the road version. The engine in fact has the shapes of the MotoGP and consequently is a production bike that allows you to express yourself at a high level with feedback for the times that years ago were done in MotoGP. The important difference is that with the SBK and the MotoGP you have to try to reach the limit immediately, something that is not possible for an amateur ”.

Michele, putting you on the spot here: what do you think of the new Honda?

"Despite Marquez's absence, they are working, but this is nothing new for us. They are not standing by idly, just like all teams. I figured they had something new to try and they did. Bradl brought the new bike to the track and it was also useful for us to watch them work ”.

One of the most striking aspects is the frame, which reflects the Yamaha philosophy. Do you think Honda is evaluating the Ducati philosophy, which is a bike capable of being ridden by all riders?

“I think this is the way forward. Ducati started this policy a few years ago by developing a bike for everyone and perhaps Honda will also follow this path. A bike everyone can ride is not necessarily a limit for Marquez; on the contrary, in my opinion it can be a help in not always being on the limit in certain circumstances. Then it is obvious that the best rider makes the difference, but by allowing him to have a more balanced bike, he can have more margin ”.

You will be back in action in February. What should we expect?

“We are getting ready for the next appointment, so you should get ready too! (smiles) ". 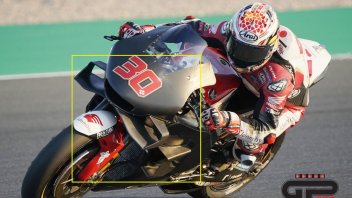 "To see everyone's level we will have to wait for the races in Europe". Mir: "the new frame improves the driveability, but we lost something under...
29 min 59 sec ago

The Noale manufacturer, currently testing in Qatar, has mounted sensors on the RS-GP that are mainly used in F1
6 hours 44 min ago

“Is the Honda difficult? All MotoGPs are. It depends on the rider. Tonight my head will work a lot, and tomorrow it’ll be better.”
13 hours 21 min ago

In addition to Donington Park, the BSB riders will be in action in three further practice sessions at Silverstone, Snetterton and Oulton Park before...
2 days 4 hours ago

In Qatar, the first day of the Sky VR46 Avintia team rider in a selection of images on and off the track
2 days 4 hours ago