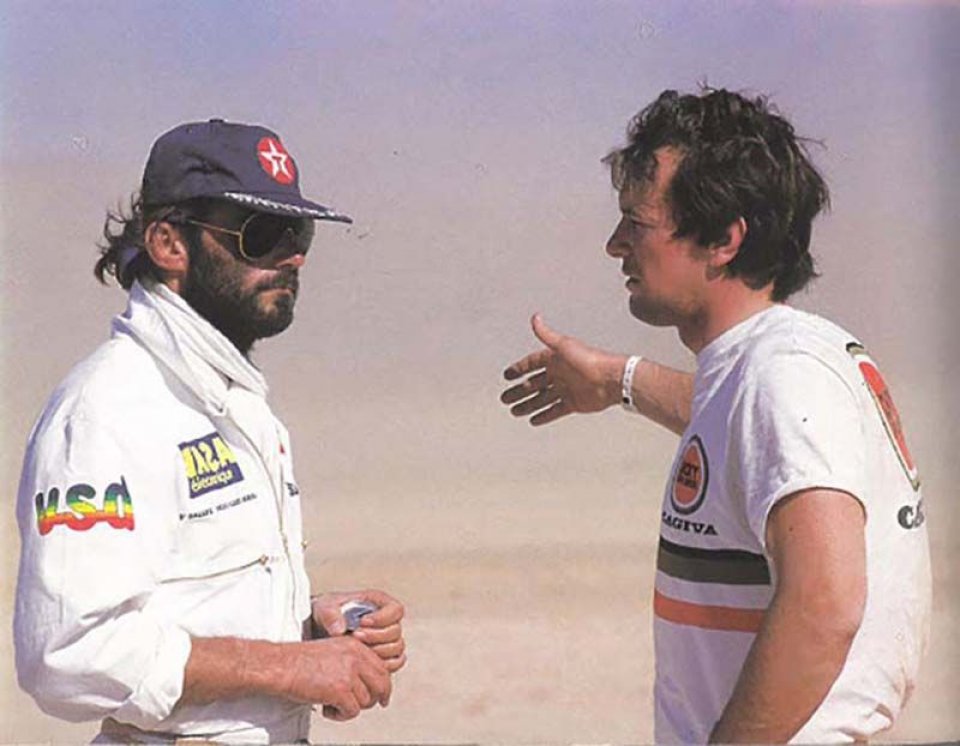 Who knows why when I think of Hubert that Rally of the Pharaohs always comes to mind, I don't remember the year in which we found him - we were in the car together, Gigi Soldano and I - along the route.

He had just crashed and badly fractured his shoulder. There was nothing else to do but help him get up, get him into the car and take him back to the bivouac.

He settled down in the back seat, holding his arm and shoulder which must have hurt him like hell. We were on a track, with all the inevitable jolts that ensue and I, every now and then, would cast an eye in the rear-view mirror, apologizing, but I only got one of his wonderful smiles for which Durban's should have sponsored him for life.

Hubert Auriol, l’Africain, the King of the Dakar, left us today. The man who was able to win the title with both motorcycles and cars. Sixty-eight years old, Hubert was no longer the Superman who had won the historic African race with both two and four wheels, together with Stephane Peterhansel and Joan Roma. First the wins on the bike in 1981 and 1983, riding a BMW. Then two more placements with Cagiva in 1985 and 1987 (the year in which he had to retire one day from the end due to the fracture of both ankles when victory was in the bag), before finally moving on to cars. In 1992 success also came with a Mitsubishi.

L’Africain, a legend, but also a guy who was always kind, extremely helpful, even when he arrived after 600 kilometres of special stage, whitened by fesh-fesh. With that Christopher Reeves-like body of his. A Superman of the sands. He smiled and I thought: but where does all that strength come from?

He was also laughing that January 1987 when he saw Claudio Castiglioni and a handful of us journalists arrive in his hospital room in Paris, dragged there by the boss of Cagiva, bottle of Champagne in hand. We were toasting the king, of course, because what did it matter that he hadn't won with the Italian bike when he had taken it to the end anyway, escorted by his friend-rival Cyril Neveu with a shinbone sticking out of his boot?

It was then that I saw Hubert Auriol cry for the first time, but I don't know how much it was for the pain of the wound or for not having been able to finish his triumphal gallop on the Lac Rose.

Another memory: Hubert and Thierry Sabine in conversation, with one of the wonderful backgrounds that only the desert is able to offer. Both full of charm like two actors.

Last November Hubert, born in '52 in Addis Ababa in Ethiopia, had been hospitalized for Covid in Paris, already suffering from other diseases. And who knows in what state he had learned the news of the disappearance of his wife, Caroline, victim of a car accident on December 3 last.

Who knows, maybe it was then that he, the invincible, realized that all he had to do was continue on his way, always straight, along the main route.

I can see him now that he gets off, dusty, from the bike or slips out of the cockpit of the Mitsu, off with his helmet, and a smile. You are at the bivouac, Hubert, wait for us. We are arriving. Sooner or later.

Oliveira: Without the initial difficulties, I wouldn’t have left my comfort...