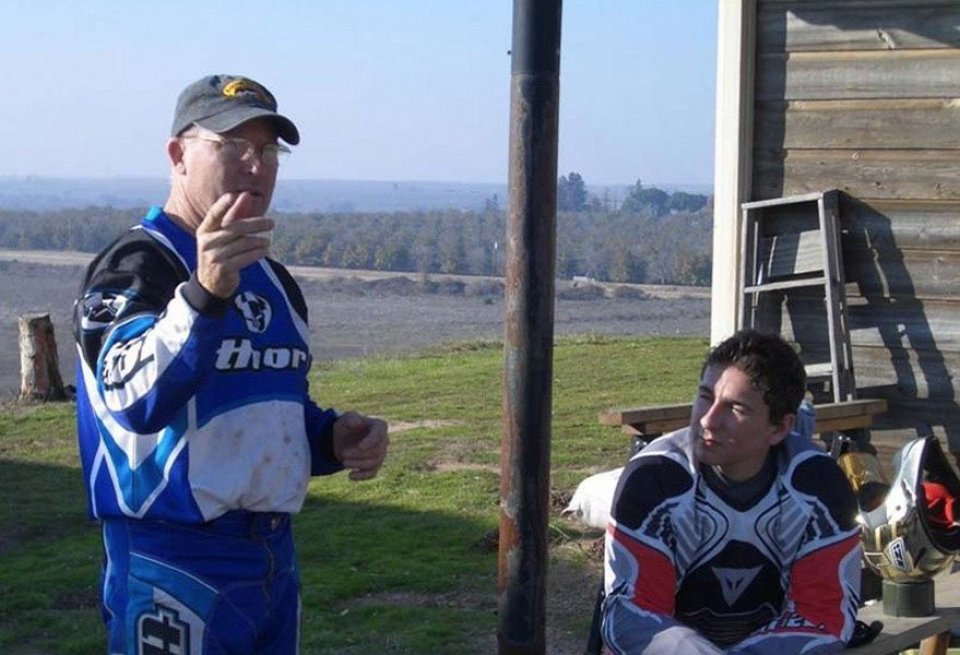 The King, the Martian or, more simply, Kenny Roberts. If there’s a rider who marked an era, it was the Californian cowboy who conquered Europe from California with his victories. He was interviewed on the YouTube channel, MotoStarr, by Peter Starr.

Kenny was a role model for many riders, because of his riding style, which he revolutionized by being the first to touch his knee to the ground, but also because of his training method. Like all Americans, Roberts came from dirt tracks and understood that the sensitivity in controlling the bike on dirt was also helpful on asphalt. It’s not for nothing that Valentino Rossi has always acknowledged Kenny as being the inspiration for the creation of his ranch.

Jorge Lorenzo also passed through the original ranch in California at the time of the 250.

“He stayed at my house for fourteen days. He wasn’t too quick at first, but then he was great,” he said ironically. “I remember that Yamaha asked me what I thought of him. I said I wasn’t sure he had the same natural talent as Valentino, but he was stubborn. When you see him walk out of the motor home with his head held high, you know he’ll win. The problems start when he’s down.”

Roberts also dispelled a myth: everyone says that the 500s were more difficult to ride than the current MotoGP bikes. Or, rather, he doesn’t entirely agree.

“The MotoGP is both easier and more complicated at the same time. It’s not an easier bike to ride, but it is easier, because you have someone who gets your helmet and suit ready, while I had to do everything by myself,”  he said jokingly. “When there are twenty riders in a second and a half, it’s not easy. I remember that, among us in qualifying, there was a seven-second difference, if not more. Also, the bikes are much more demanding from a physical point-of-view.”

But they forgive even more.

“When I rode the 5-cylinder Honda, it seemed like a very powerful road bike, not like my 500, which was violent when you touched the gas. In that sense, the MotoGP is easier,”  he explained.

The main point is that they’re also safer, and this also extends the career of a rider, as in Rossi’s case.

“ I don’t think the MotoGP is easier to ride, but now there are a lot less highsides. On the 500, you had to struggle.  It was hard to ride,” he continued. “Over the years, the tires have improvedm and this helps, because a highside always hurts, no matter at what speed. Handling it was more difficult with two strokes. Also, the clothing has improved a lot. I remember that the suit my son Kenny used when he was racing in Suzuki weighed twice as much as mine in 1983, and now they weigh even more.”