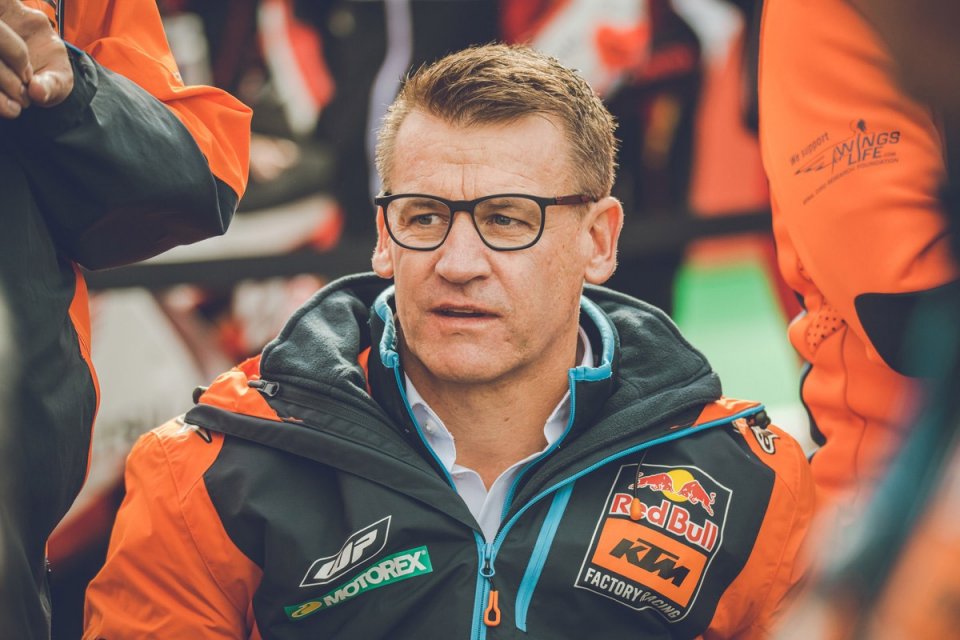 At the end of 2021 the contracts of three MotoGP teams with their current partners will expire. Gresini will split from Aprilia or at least will no longer be its benchmark team. The agreement between SIC Petronas and Yamaha might come to an end and also the future of Team Avintia, currently linked to Ducati, is far from clear.

Someone who is observing the situation from outside and with an extremely interested gaze, seems to be KTM. The confirmation of the agreement with Tech3 also for the next few years is a mere formality, given the results achieved together in the last season thanks to the collaboration of the French team, yet things could become so interesting as to bring the number of satellite teams to two ready to use the RC16 in the race.

Pit Beirer, responsible for all KTM sporting activities, has been giving an interview to our Speedweek colleagues, giving rise to a very interesting scenario that also involves Valentino Rossi and the possible debut of his team in MotoGP in 2022. The colours of VR46 will already be represented next season by Luca Marini on the Avintia Ducati, but many are betting that the Spanish team is ready to sell its entry slot in the top class to VR46, perhaps in collaboration with SKY. It would only remain to be established which bike Rossi's team would use… and it doesn't necessarily have to be Yamaha.

“As soon as we can say that KTM has finally reached the top – declared Beirer - we will discuss whether we can equip a second MotoGP customer team. If someone is interested, we would of course offer our bikes. But this is not the moment to discuss something like this. We took another huge step in MotoGP in 2020 because we won three races. We must first confirm this success next year. "

It might therefore be possible for Beirer to evaluate a third KTM team perhaps starting from 2022...

"It probably won't work out sooner. We have now reached a level that is really satisfactory, because we are now finally starting to repeat our results also with the second team. After two years, the staff who look after the second team are well established. The material is there, the suppliers are used to the delivery quantities. If I now have to make it clear to everyone involved that we will need more MotoGP material in the future, then everyone will again be at the limit and stuck in the middle of purgatory again. We want to enjoy the situation for a moment."

In short, the possibilities would exist but there is still nothing concrete for KTM…

“At the moment, it is definitely not up for discussion and there are also no inquiries about it. That we will continue with Tech3 is clear from our side. But at some point we will think about whether we can manage a third team if there are further inquiries. As long as there is no demand, we are in the realm of speculation. Dorna would like each of the six manufacturers to equip a customer team. So it would be counterproductive if there were one manufacturer with three teams. "

There are three teams that could knock on the doors of KTM, namely a possible Sky VR46 team of Rossi, the Gresini team and also the Petronas team of Razali. Specifically with Gresini there has been some problem in the past, when in 2015, despite having a contract with KTM for Moto3, the Italian team switched to Honda. A situation that, however, does not seem to create any particular problems for Beirer.

“If you don't do business in this paddock with someone who has broken his word before, you'll be on your own relatively soon. We will hold talks with all serious interested parties. We would be happy to hear from Valentino at any time, but preferably not before 2022 or 2023.”