There’s a lot of talk these days about Marc Marquez, his third arm surgery, and the time it'll take for him to recover. “Our” Carlo Pernat also spoke about this in a live broadcast (watch the full version above) during which he also answered questions by viewers.

“It was a very difficult operation in which several specialists were involved. He’ll have a check-up in a month to see if everything went well,” he explained.

The manager from Genoa is pessimistic about seeing Marquez back on his RC213V in a relatively short time.

“In my opinion, there are many possibilities that Marc will not race in 2021, even if I hope I’m proved wrong by facts,” he stated. “To recover after surgery, he’ll need six months, and we have to bear in mind that he hasn’t been on the bike for a year, so it’ll take several months to see him again in the race. After that long period of hospitalization, he’ll need more time.”

If that were the case, Honda would be in big trouble.

“Honda has to get a move on by the end of January,” Pernat warned. “It seems logical to me that they already know that they won’t be seeing Marquez again for at least half a championship, so they have two decisions to make. The first, which is supported by Repsol, is to have Alex Marquez with Pol Espargarò on the official team. At this point, Nakagami and, perhaps, Dovizioso would be in LCR.”

It’s precisely Andrea who’s at the center of the most disparate rumors these days, but a possible agreement with him may not be as simple as one might imagine.

“Honda has to move immediately. They have to go to Dovizioso and offer him a two or three year contract as a test rider. If they offered him just one year, or a few races to replace Marc, Andrea would not accept,” is Pernat’s advice. “Puig and Honda have a big problem at hand, and they have to decide what to do quickly, but it’s a very delicate situation.”

Also because Andrea may not be available to act as a replacement.

“I know that Battistella spoke to Puig in Portimao, but Dovi got this motocross idea in his head. Andrea is their only solution, and I’m under the impression that it depends more on him. They have to convince him," he concluded. 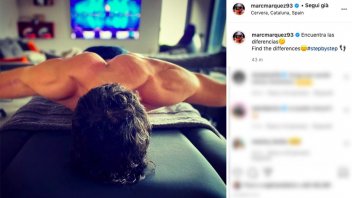