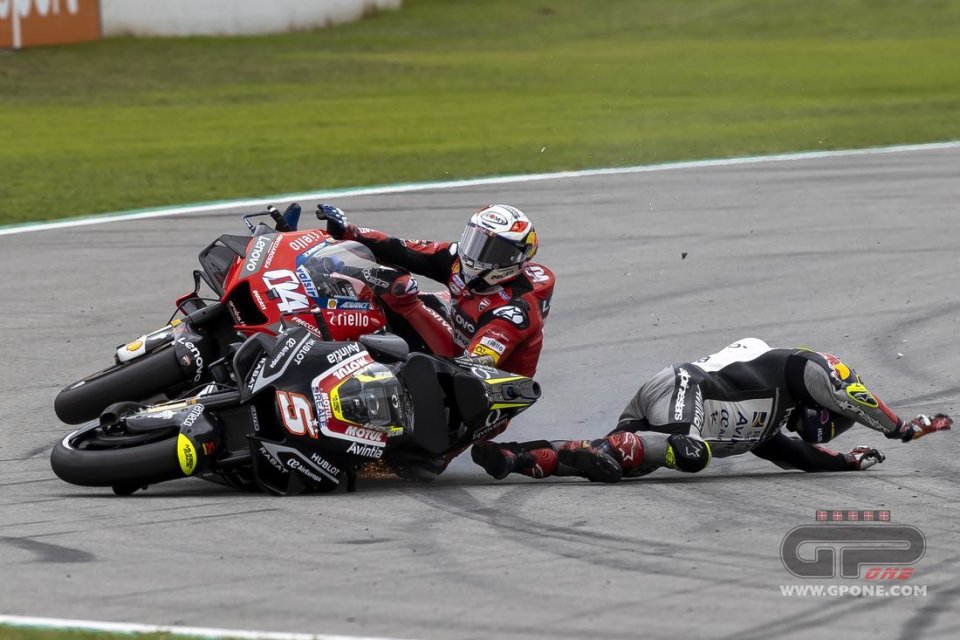 At the end of the season you always look at the rankings to get an idea of the situation and there is one in particular in which every rider hopes not to appear… the one reserved for falls. During this championship there were 722 registered crashes in all three classes, the lowest number in the last 10 years, but the reason is the lower number of GPs, 14 (for MotoGP) against 19 in 2019 and 18 in previous years.

All the categories, on the other hand, are aligned on one figure: the race is the session in which there are most crashes: 222 accidents out of a total of 722, but it is not surprising because it is obviously the moment in which the riders risk the most. The complete opposite to the warm-up, only a study session, where in fact both the MotoGP and Moto3 riders recorded the least number of falls, while the Moto2 riders, on the other hand, did not respect this rule, with 36 falls, more of those in qualifying.

When we talk about the riders, on the top step of the podium we can find Johann Zarco, with 15 crashes. The Frenchman was at the top of this ranking… but not by much, because Alex Marquez arrived at 14, but being a rookie it can be understandable. Less are the many errors of Aleix Espargarò, 12, worse than Lecuona and Binder.

Valentino Rossi, on the other hand, crashed a lot in the race, but little in total, 6 times, one more than Cal Crutchlow, usually in the top positions among the ‘stuntmen’ but this year particularly careful, perhaps also due to his not optimal physical condition that led him to be a bit more careful. World champion Mir and Morbidelli also had the same number of falls.

As always in the low positions of the classification Andrea Dovizioso and Maverick Vinales, two riders who make very few mistakes. Leaving aside Marc Marquez who only did one race, Danilo Petrucci's last position is astonishing, which in this case is a good thing. The rider from Terni only hit the asphalt twice in 14 GPs.

The performances of the MotoGP riders, however, paled in comparison with their colleagues in Moto2 and Moto3, who monopolized the podium. The prize (if you can call it that) went to Kasma Daniel, who touched the ground 20 times, one more than Jorge Navarro, silver medallist, while the podium was made up by Gabriel Rodrigo with 18 tumbles.

Wooden medal for Izdihar, while 5th place was tied between Loper, Chantra and Zarco.

The Italians are in 6th place thanks to Celestino Vietti and Lorenzo Dalla Porta.

And so we arrive at the circuits where riders went down the most times. In this special classification, Le Mans is reconfirmed as the most feared track, this year in France it reached triple and even round figures: 100 crashes. Considering the climatic conditions in which the GP was held, it is not such a surprising fact. Instead, it is curious that on a technical track, and unknown to most, such as that of Portimao there were the fewest errors in the whole weekend: only 32.

All that remains is to decree which has been the most insidious corner of the entire championship and there is no doubt about it. With a large gap, the winner is….. Turn 3 at Le Mans (the left-hander of the first ‘esse’): during the weekend there were 30 crashes at that point.

So we leave you with the rankings of the falls of the Moto2 and Moto3 riders.

BMW’s Dutch rider talks about the new riders: “They’re fast. Petrucci has proven so much in several championships, and Gardner is a Moto2 World...
4 days 11 hours ago

he French rider in his career has raced in SBK, Supersport, 250 and even the Dakar, now he wants to test himself on the Isle of Man
4 days 14 hours ago

The young, almost 20-year old, Storm Stacey will be racing in the British Superbike 2023 with the GR Motosport Kawasaki team for his fourth...
5 days 12 hours ago

All this probably stems from the purchase of a van in Andorra a dealer says Hector never paid for.
5 days 18 hours ago