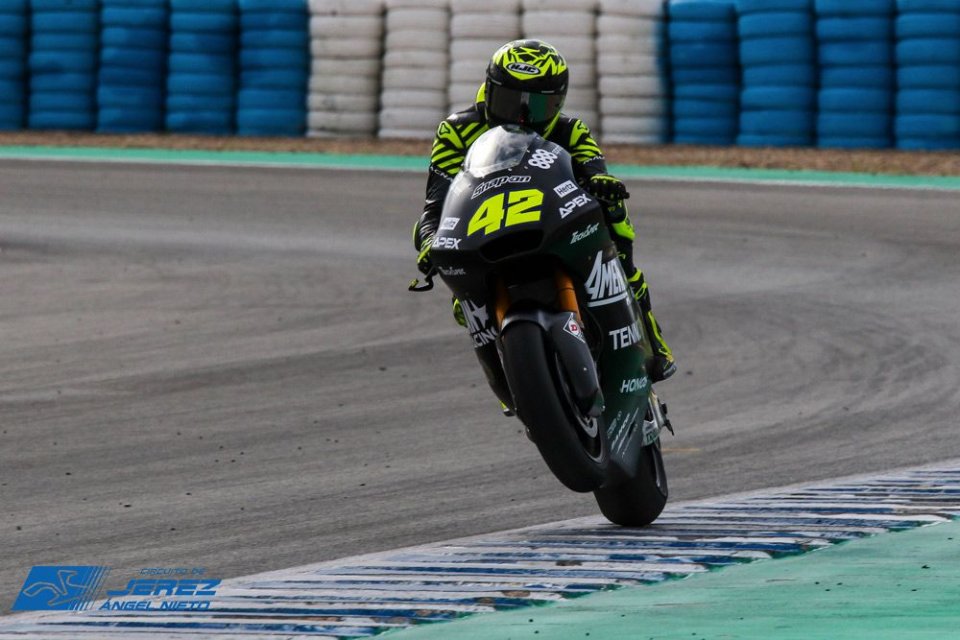 After yesterday’s bad weather had kept (almost) everyone in the pits, today the sun came out at Jerez and the Moto2 riders were able to make the most of the day of testing. When the red light ended practice at 6pm, American Racing rider Marcos Ramirez was at the top of the timesheet. The Spaniard stopped the clock in 1’42.064, about a second slower than the track record, a sign that the track conditions were not perfect after the rain that had fallen in recent days.

Behind Ramirez was veteran Tom Luthi, who has switched to the SAG team. The Swiss rider was 0.264s down on Marcos. A fraction quicker than Marco Bezzecchi, who finished in 3rd place.

Fourth but only a whisker slower was Stefano Manzi, making his debut on the Kalex of the Pons team after leaving MV Agusta. A bike that has now been taken over by Lorenzo Baldassarri, who seemed to be at ease on the F2, managing to set fifth quickest time, just over half a second from the top slot.

Seventh place for another old acquaintance of the paddock, Marcel Schrotter, who preceded a rookie from the USA. MotoAmerica champion Cameron Beaubier yesterday was only able to do a few laps in the wet, but today he began to familiarize with the Moto2 bike and he adapted quickly, finishing the day six-tenths off the top slot and ahead of Simone Corsi.

Ninth place for Celestino Vietti, best of the rookies from Moto3. The Sky VR46 team rider completed 99 laps, the best in 1’43.351, over 1.2s off Ramirez's time. Behind him was Hafizh Syahrin who was able to step on the NTS for the first time. A lot of laps (98) were completed by Barry Baltus, teammate of the Malaysian, and by Tony Arbolino, making his debut on the Kalex of the Intact GP team. The Italian wrapped up the standings on this last day of testing.