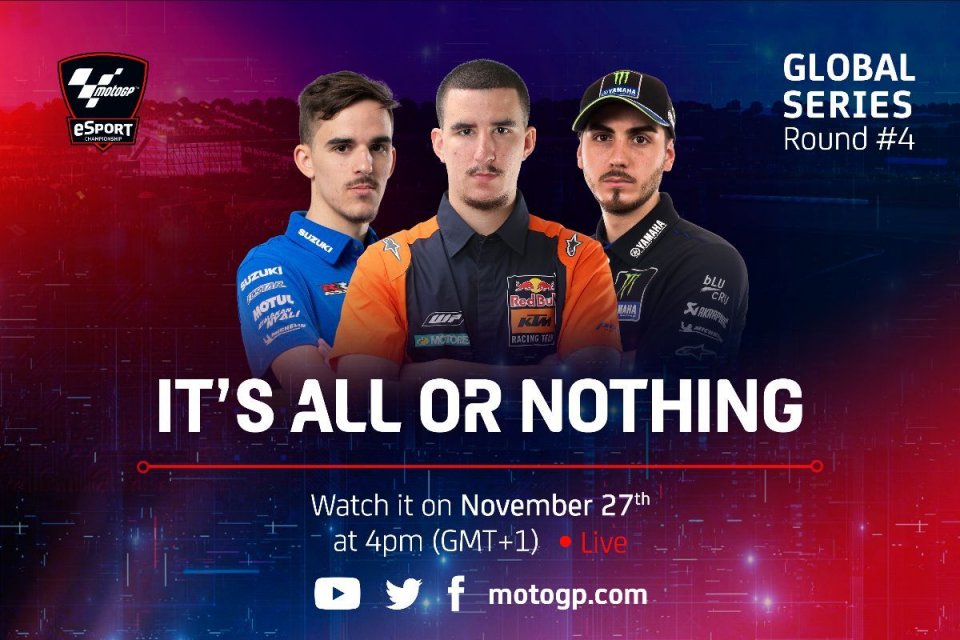 A dramatic year is poised to have a fitting send off as the fourth and final round of the Global Series kicks off on Friday 27th November to finally determine the winner of the 2020 MotoGP eSport Championship.

Eleven competitors from around the world qualified to compete in the all-important Global Series, a four-round, eight-race championship which showcases some of the best Esport talent on the globe.

One of those names is current leader Williams_Adrian, a competitor who has taken his gaming to new levels in 2020 by dominating the series to date. The Spaniard has won five races out of six to be on the cusp of his first MotoGP eSport title. But, double points will be available for the final round, meaning it's still wide open!

MotoGP teams and manufacturers are placing a greater emphasis on the MotoGP eSport Championship than ever. As such, each finalist will represent a current MotoGP team, meaning factory pride is at stake.

They will continue fighting it out for the crown. Along with the honour of victory, there are some incredible prizes at stake: first place takes home a BMW M235i xDrive Gran Coupé, second an Aprilia RS 125 GP replica and third a new Lenovo Legion Y740 Laptop – and there are Red Bull and MotoGP VIP Experiences up for grabs too, as well as a pole position prize from partner TISSOT.

Williams_Adrian has been the class of the field so far this year. He secured double victories at rounds one and three, and was only beaten once at round two. That means he arrives at round four with a healthy 39-point lead. But the man most likely to overturn that is his brother, Williams_Cristian, the winner of one race this year and the man who sits second overall. It would be foolish to rule out trastevere73, the winner of the 2017 and 2018 editions of the MotoGP eSport championship, and a competitor capable of handling big pressure situations. The Italian sits 61 points back in the standings.

Due to the restrictions placed on the MotoGP paddock during the global pandemic, eSport races can no longer be held on site. Finalists will be competing from home on Friday 27th November at 4pm (GMT+1). As ever, they’ll be race with the new official MotoGP20 Videogame from videogame developer, publisher and longstanding partner Milestone – which is available to buy now – with both race direction and the event powered by Lenovo Legion PCs

The eleven finalists will race the historic Silverstone circuit in England in the first race and Valencia’s tight, twisty Ricardo Tormo Circuit for the second.

Who will be the 2020 MotoGP™eSport World Champion? Be sure to tune in at 4pm (GMT+1) on Friday 27th November to find out!